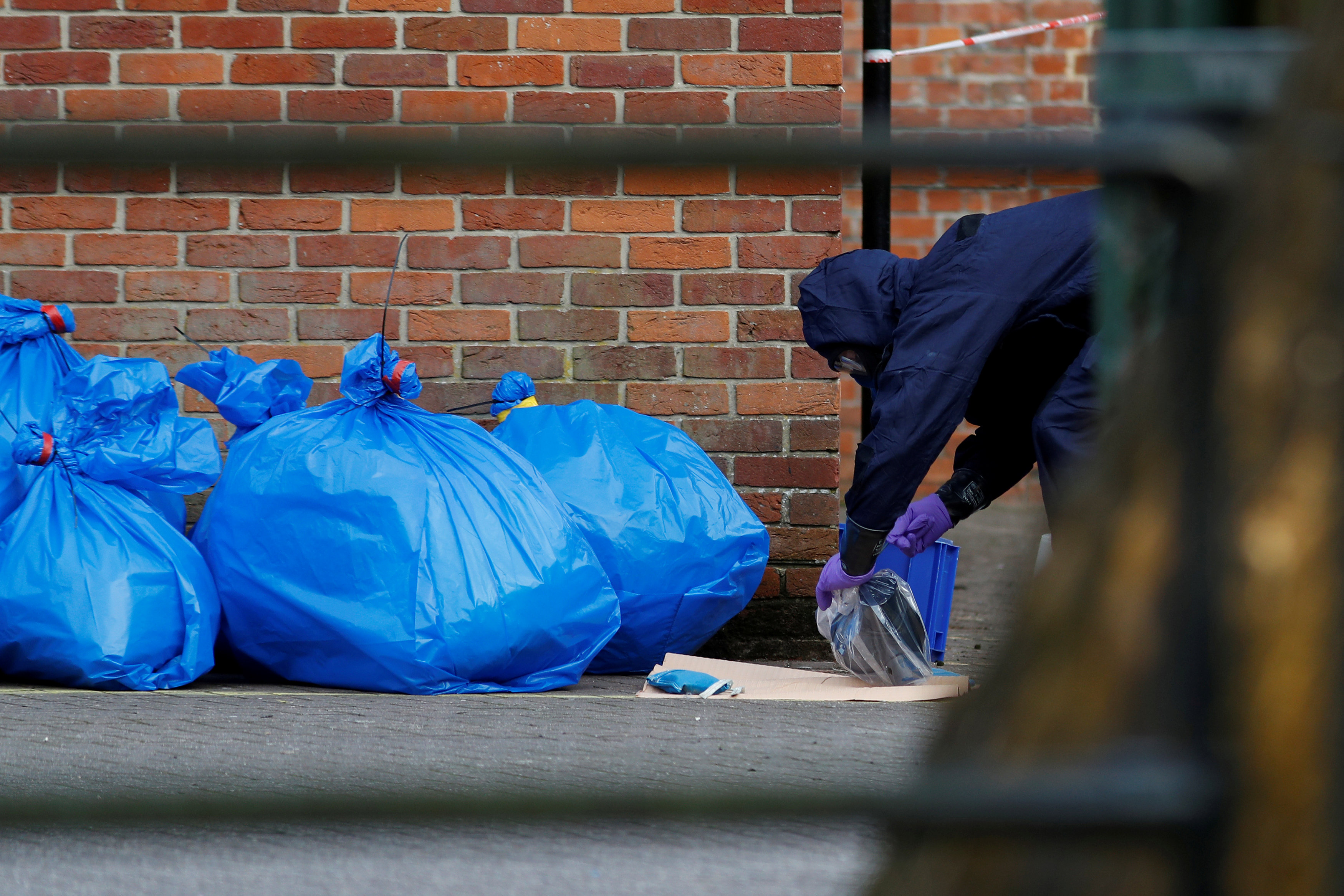 The legal regime, based on a French proposal to combat what Paris and London say is the repeated use of chemical weapons by Russia and Syria, would allow the EU to impose sanctions more quickly on specific individuals anywhere in the world, freezing their assets in the bloc and banning them from entry.

Ambassadors from the EU’s 28 governments are expected to approve the regime at their weekly meeting on Wednesday, without debate.

The EU already has sanctions lists for Syria and Russia, but under the current system individuals must be added to special country lists. These are complex to negotiate and difficult to expand because some EU governments are reluctant to criticize close partners, particularly Moscow.

“This is significant because we will be able to add names without a big, sensitive debate,” said one senior EU diplomat involved in the negotiations. “We can try to uphold certain rights rather than just issuing statements.”

Banned two decades ago under an international treaty, the rising use of nerve agents has alarmed Western governments.

Recent cases include the assassination of the half-brother of North Korean leader Kim Jong Un in 2017 and the attempted murder of Russian double agent Sergei Skripal in March.

EU diplomats say the new chemical weapons regime could be followed up by a similar mechanism for human rights violations, similar to the United States’ Global Magnitsky Act, which allows Washington to sanction individuals for abuses or corruption.

The regime, due to be given a final stamp of approval by EU foreign ministers on Oct. 15, will still need the support of all EU governments for names to be added, according to a preparatory paper seen by Reuters.

It was not immediately clear if Britain would propose to add two Russians accused of poisoning Skripal and his daughter.

But diplomats say it is a possibility as Britain has been unable to convince other EU countries to back new sanctions on Russia over the case.

Britain has charged two Russian men, identified as Alexander Petrov and Ruslan Boshirov, with attempting to murder Skripal and his daughter Yulia by spraying a chemical weapon on Skripal’s front door in the English city of Salisbury.

France pushed the EU sanctions regime in part because the United Nations Security Council has been deadlocked over how to set up an independent inquiry for chemical attacks in Syria.

Russia rejected a joint draft resolution by Britain, France and the United States earlier this year. 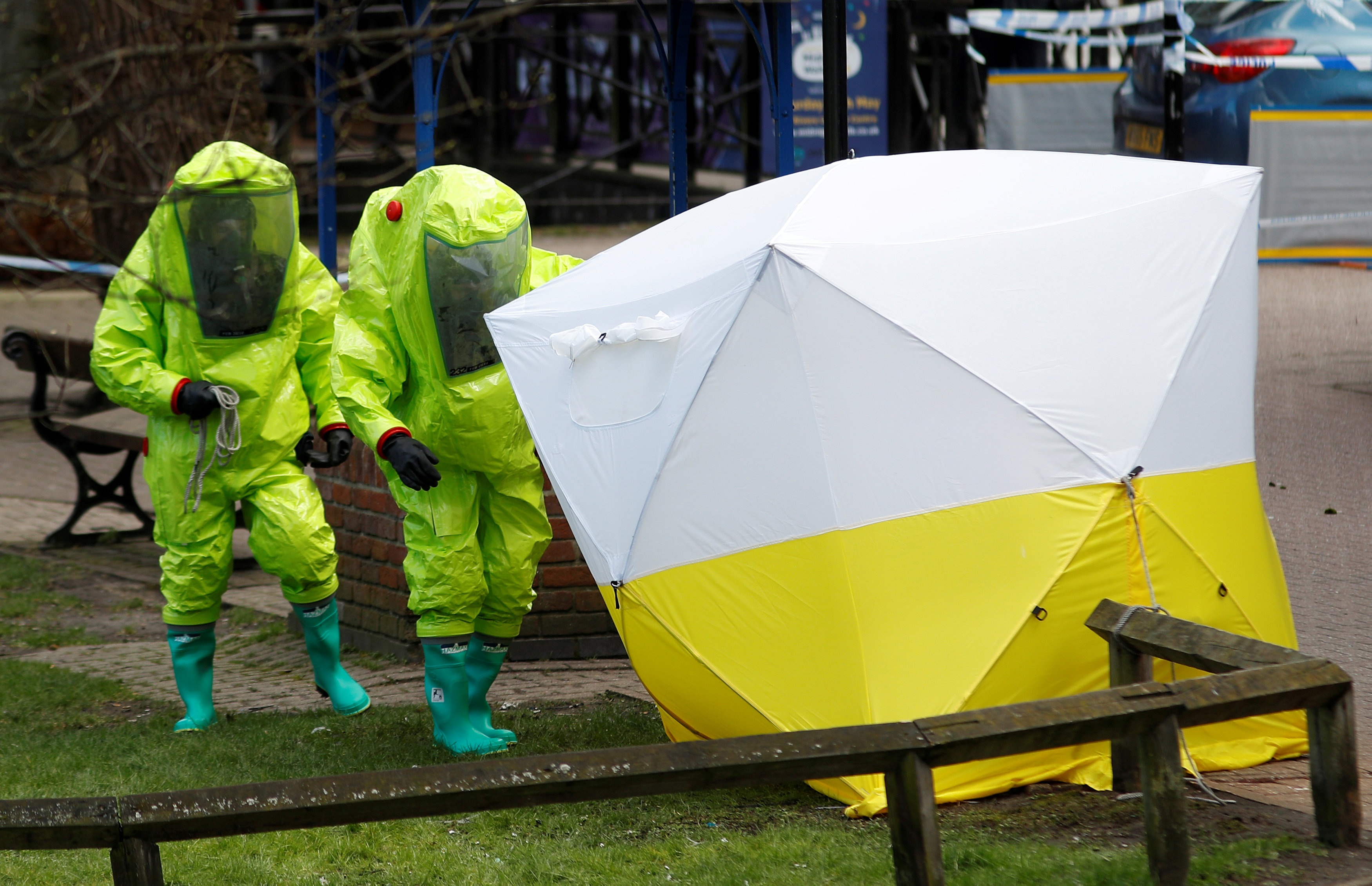 By Alistair Smout and Sarah Young

LONDON (Reuters) – Sergei Skripal, the Russian former spy who was left in critical condition by a nerve agent attack in Britain more than two months ago, has been discharged from hospital, national health authorities said on Friday.

Skripal, 66, a former colonel in Russia’s military intelligence who betrayed dozens of agents to Britain, and his daughter Yulia were found unconscious on a bench in the southern English city of Salisbury on March 4.

Britain’s accusations that Russia was behind the nerve agent attack led to a Russia-West crisis in which Western governments, including the United States, have expelled more than 100 Russian diplomats. Russia has denied any involvement in the poisoning and retaliated in kind.

The Skripals were in a critical condition for weeks and doctors at one point feared that, even if they survived, they might have suffered brain damage. But their health began to improve rapidly, and Yulia was discharged last month.

“It is fantastic news that Sergei Skripal is well enough to leave Salisbury District Hospital,” the hospital’s Chief Executive Cara Charles-Barks said in a statement.

Police have said they will not give any details of the Skripals’ new security arrangements in the interests of their safety, and neither they nor the hospital gave any details of Sergei’s new whereabouts. Yulia was taken to a secure location after her release, the BBC reported at the time.

Britain and international chemicals weapons inspectors say the Skripals were poisoned with Novichok, a deadly group of nerve agents developed by the Soviet military in the 1970s and 1980s. Foreign minister Boris Johnson called on Friday for a meeting of parties to the international Chemical Weapons Convention to find ways to strengthen the agreement.

A spokeswoman for British Prime Minister Theresa May, who called the Salisbury attack a “reckless and despicable act”, welcomed news of Skripal’s discharge.

Moscow has denied involvement in the first known offensive use of such a nerve agent on European soil since World War Two. Russian President Vladimir Putin said on Friday that had a weapons-grade nerve agent been used on Skripal, he would be dead.

Russia has suggested Britain carried out the attack itself to stoke anti-Russian hysteria, and Foreign Minister Sergei Lavrov said last month that the agent used in the attack may have never been made in Russia.

Putin on Friday welcomed Skripal’s progress, and Russia’s ambassador to London reiterated Russia’s desire to see the pair, saying that currently Britain was not fulfilling its obligations under international law.

“We’re still demanding the access to these people. We want just to understand how they feel and we want them to say personally what they want. If they don’t want our assistance it’s fine. We want to see them physically.”

Britain has said previously that Yulia, a Russian citizen, has chosen not to take up Russia’s offer of help.

Salisbury Hospital said that patient confidentiality limited the information they could give, but that the “acutely unwell” Skripals had been stabilized and kept alive until their bodies could replace poisoned enzymes with new ones. 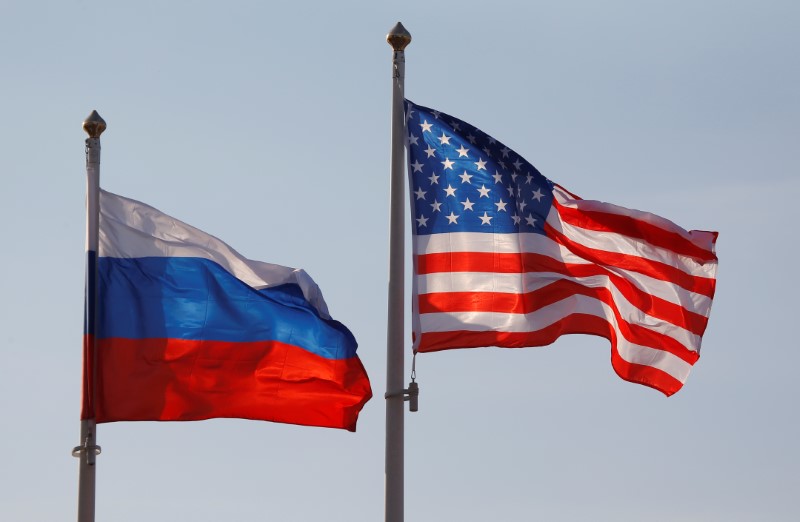 By Arshad Mohammed and John Walcott

WASHINGTON (Reuters) – By imposing new sanctions on Russia and condemning a suspected Russian chemical attack in Britain, Washington has hinted at a tougher stance toward Moscow despite President Donald Trump’s stated desire for better ties.

The U.S. Treasury slapped sanctions on 19 Russian citizens and five entities for election meddling and cyber attacks in the most significant steps the United States has taken against Russia since Trump took office amid U.S. intelligence agency allegations that Moscow tried to help him win the 2016 election.

While the Treasury put off targeting oligarchs and officials close to Russian President Vladimir Putin, it said further sanctions were coming and for the first time blamed Moscow for cyber attacks stretching back at least two years that targeted the U.S. power grid, including nuclear facilities.

After initially equivocating about a chemical attack on a former Russian double agent in Salisbury, England, the White House joined a statement by the leaders of Britain, France and Germany in which they said they “abhor the attack” and blamed it on Moscow.

Moscow has denied any involvement in the poisoning.

Thursday’s actions have caused some Russia analysts to ask whether the administration is taking a more confrontational stance despite Trump’s repeated statements in the election campaign that he wanted a better relationship with Moscow, his praise for Putin and apparent reluctance to criticize the Russian leader.

“I think we have hit an inflection point in the current administration’s approach towards Russia,” said a diplomat who spoke on condition of anonymity. “There has been a shift in balance.”

The diplomat attributed the evolution partly to a clash between U.S.-backed and Russian-backed forces in the Syrian city of Deir al-Zor in February; Russia pounding Syria’s eastern Ghouta enclave of anti-government rebels with air strikes during the past month; and Putin showing a video on March 1 of a weapon appearing to hover over what looked like a map of Florida, home to Trump’s Mar-a-Lago resort.

“Those three things, taken together, have caused a shift in analysis in parts … of the administration,” said the diplomat.

While there was a sense at the White House that there has been a hardening of Trump’s view toward Russia, at least for now, it was unclear whether this represented a long-term shift.

A senior administration official said there was some feeling that the goodwill that Trump extended toward Russia when he took over has not been reciprocated and that the Russians do not want to have good relations with the United States.

This has exasperated Trump, who instructed his team to make sure the United States appeared to be in solidarity with Britain over the nerve agent attack.

The Kremlin denies interfering. Mueller is also investigating any potential collusion between the Trump campaign and Moscow officials, something Trump denies.

“My hypothesis is … the White House stance on Russia is going to be determined to a large extent by how much they think the investigation threatens their political position,” Rumer said.

Officials from multiple U.S. agencies discussed next steps at a meeting on Thursday, with one aim being to avoid personally attacking Putin and taking in-your-face steps that could prompt retaliation.

“This is just one of a series of ongoing actions that we’re taking to counter Russian aggression,” one U.S. official told reporters. “There will be more to come, and we’re going to continue to employ our resources to combat malicious Russian activity and respond to nefarious attacks.”

Sergei Skripal, 66, and his daughter Yulia, 33, were found unconscious on a bench outside a shopping center on March 4 after being exposed to what the British authorities have identified as a military-grade, Soviet-era Novichok nerve agent.

Another U.S. official attributed the sharper edge to U.S. policy to increasingly brazen behavior by Russia in cyberspace and on the ground, culminating in the Salisbury attack.

This U.S. official, who spoke on condition of anonymity, also pointed to Russia’s refusal to restrain Syrian President Bashar al-Assad and the role of Russian “mercenaries” in Syria, now entering its eighth year of civil war.

The official said it was unclear if Trump himself saw Russia as an adversary but suggested Putin may have “overplayed his hand” by leaving Russian fingerprints on the hacking, the chemical attack, the deployment of ground-launched cruise missiles which the U.S. says violate an arms control treaty, and a March 1 speech on “invincible” Russian weaponry.

“If the president felt like Putin was one-upping him, not to mention stealing the limelight, then it wouldn’t be surprising that he would react,” the official said.

While more sanctions are expected, it was not clear if the Trump policy toward Russia was changing, especially given Trump’s unpredictability, said a third official, who is involved in talks on next steps.

“Tomorrow is another day,” the official said.