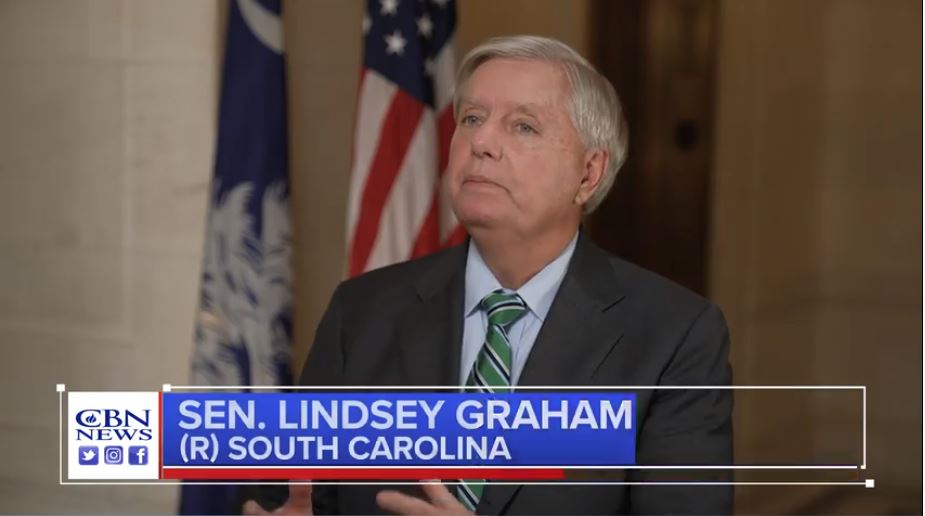 Proverbs 6:16-19 There are six things that the Lord hates, seven that are an abomination to him: haughty eyes, a lying tongue, and hands that shed innocent blood, a heart that devises wicked plans, feet that make haste to run to evil, a false witness who breathes out lies, and one who sows discord among brothers. 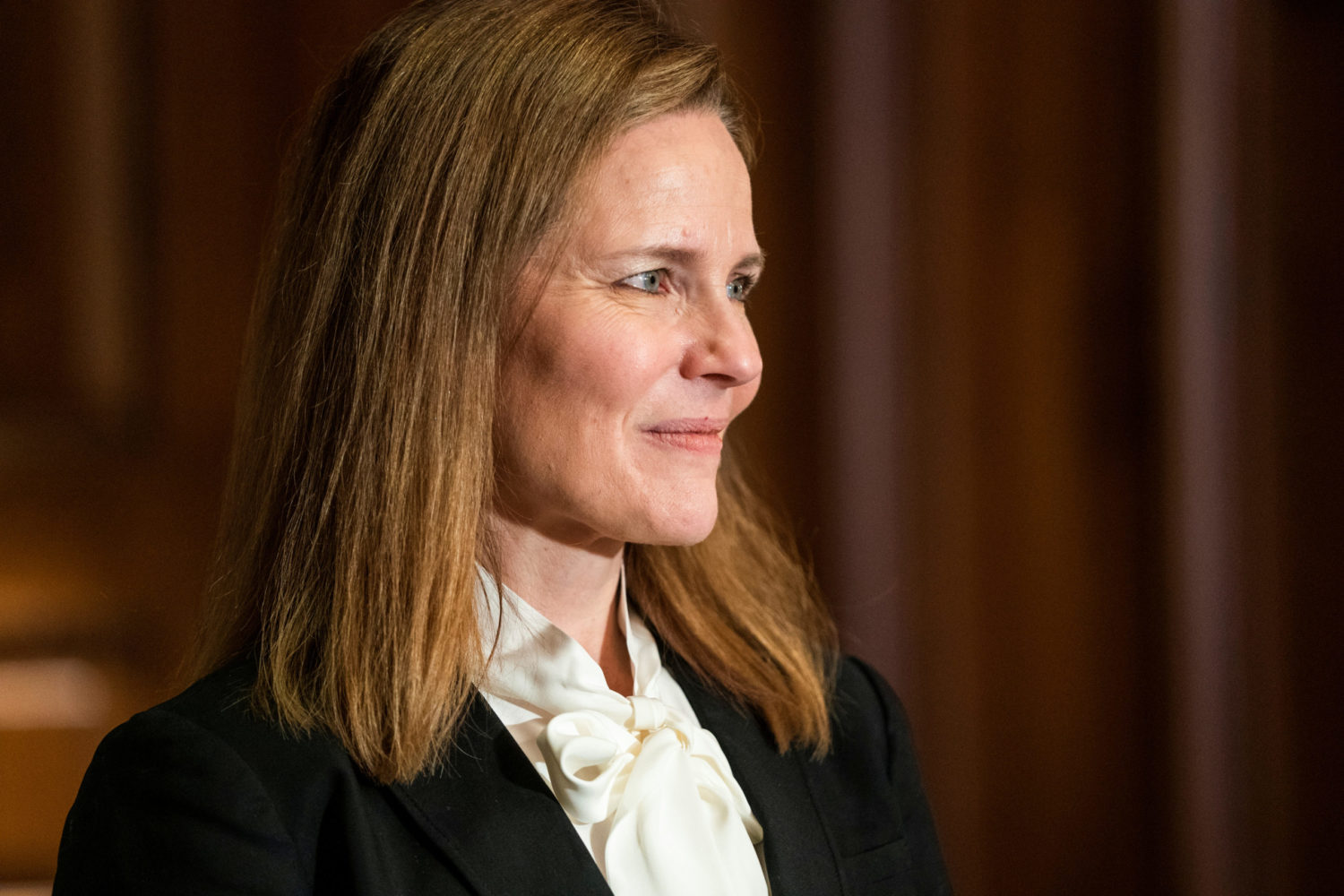 “Full steam ahead,” the aide to Senate Judiciary Committee Chairman Lindsey Graham responded to Reuters, when asked if the hearing schedule for hearings to begin on Oct. 12 could change.

Graham spoke to Trump on Friday morning and said the first thing Trump asked was about was the Senate’s plan for his nominee’s confirmation, the aide added.

“I think we can move forward. Our biggest enemy, obviously, is … the coronavirus, keeping everybody healthy and well and in place to do our job,” McConnell told radio talk show host Hugh Hewitt.

McConnell described the Senate’s decision on whether to confirm Barrett as being “front and center for the American people” and said the Senate would act after a committee recommendation due Oct. 22.

Barrett’s nomination faces fierce opposition from Senate Democrats and will face questions about her judicial philosophy and approach to the law when she comes before Graham’s panel.

Democrats argue the vacancy should be filled after the next president is chosen on Nov. 3, a view shared by a majority of Americans, according to recent national polls. Trump’s Republican allies, who hold a 53-47 majority in the Senate, have vowed to follow a compressed timeline to confirm her before then.

Barrett, seen as a reliable conservative, would replace Justice Ruth Bader Ginsburg, a champion of gender equality and other liberal causes who died on Sept. 18 at age 87. She previously sat for a hearing when she was appointed by Trump to the Chicago-based 7th U.S. Circuit Court of Appeals in 2017. 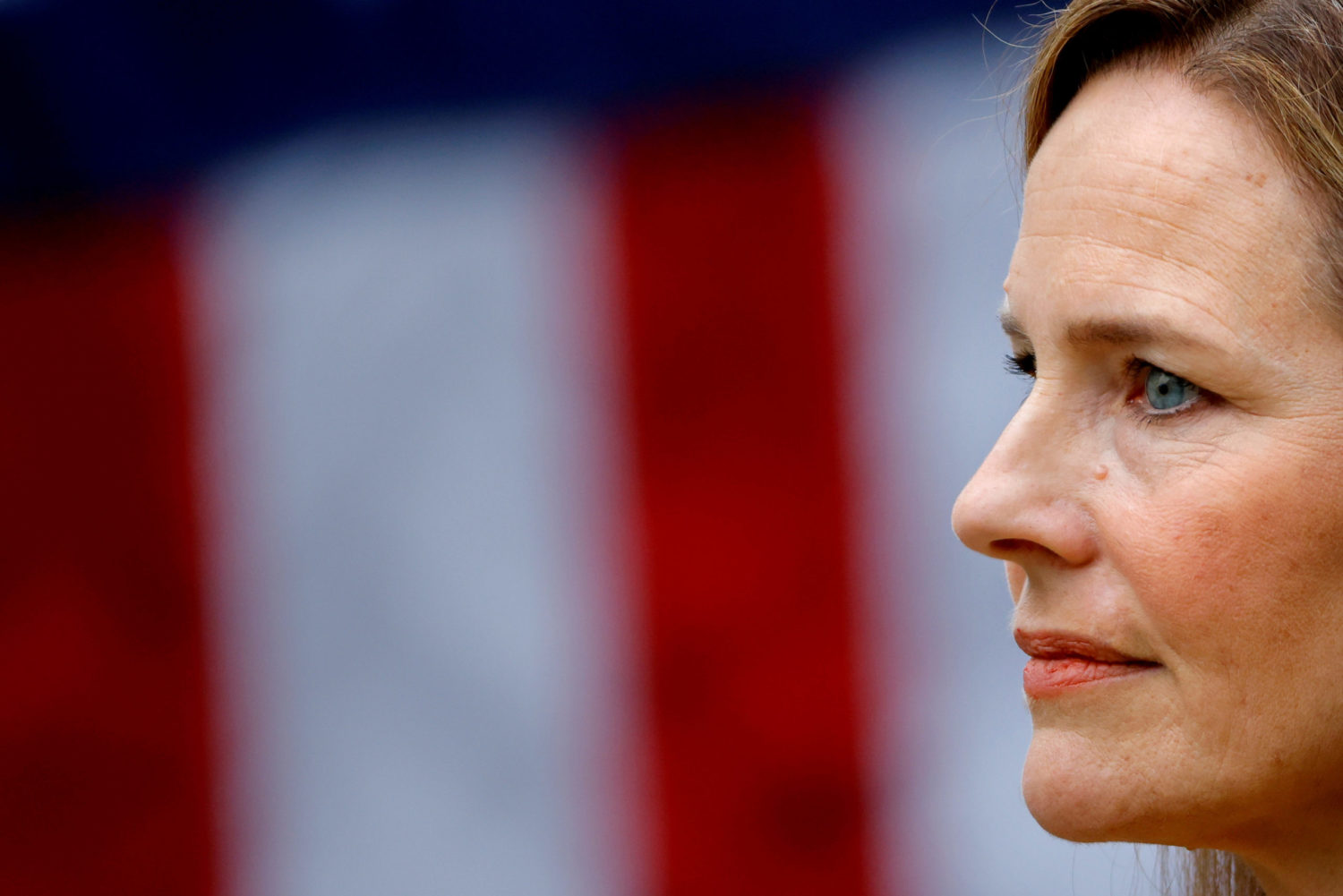 WASHINGTON (Reuters) – President Donald Trump’s nominee to the Supreme Court, Amy Coney Barrett, will begin meeting with senators this week as Republicans push ahead with a rapid Senate confirmation process ahead of November’s presidential election over the objections of Democrats.

Barrett will meet Senate Judiciary Committee Chairman Lindsey Graham on Tuesday at 5:30 p.m. EDT (2130 GMT) at the U.S. Capitol, Graham’s office said. She will meet with several other committee Republicans earlier in the day.

Trump on Saturday announced Barrett, 48, as his selection to replace liberal Justice Ruth Bader Ginsburg, who died on Sept. 18 at age 87. Barrett, who would be the fifth woman to serve on the high court, said she would be a justice in the mold of the late staunch conservative Antonin Scalia.

Her confirmation by the Senate would result in a 6-3 conservative majority on the court.

Republicans hold a 53-47 advantage in the Senate and are aiming to hold a vote before the Nov. 3 election, in accordance with Trump’s wishes.

Trump, who is running for a second term against Democrat Joe Biden, has said he wants nine justices on the court so that it will have a full complement to tackle any election-related legal issues and possibly decide the outcome in his favor.

The only time in U.S. history the Supreme Court has had to resolve a presidential election was in 2000.

Barrett’s meetings with senators are taking place ahead of a multiday confirmation hearing scheduled to begin on Oct. 12, when she will face questions about her judicial philosophy and approach to the law.

Graham told Fox News on Sunday that the panel will likely vote on the nomination on Oct. 22, setting up a final vote on the Senate floor by the end of the month.

Democrats object to Republicans pushing through the nomination so close to the election, saying that the winner of the contest should get to pick the nominee.

Trump’s nomination of Barrett is the first time since 1956 that a U.S. president has moved to fill a Supreme Court vacancy so close to an election.

Democratic opposition to Barrett has so far been focused on her possible role as a deciding vote in a case before the Supreme Court in which Trump and fellow Republicans are asking the justices to strike down the Obamacare health law known formally as the Affordable Care Act. If confirmed quickly, Barrett could be on the bench when the justices hear oral arguments on Nov. 10.

A key provision of the law that would be thrown out if the court struck it down requires insurance companies to provide coverage to people with pre-existing conditions.

Some Democrats have said they will refuse to meet with Barrett but others, including some on the committee, have said they intend to engage in the process so they can ask Barrett directly about issues such as healthcare and abortion. Senator Chris Coons, a Democrat, will talk to her by phone or in a Zoom meeting, a spokesman said.

Conservative activists are hoping that a 6-3 conservative majority will move the court to the right by curbing abortion rights, expanding gun rights and upholding voting restrictions. 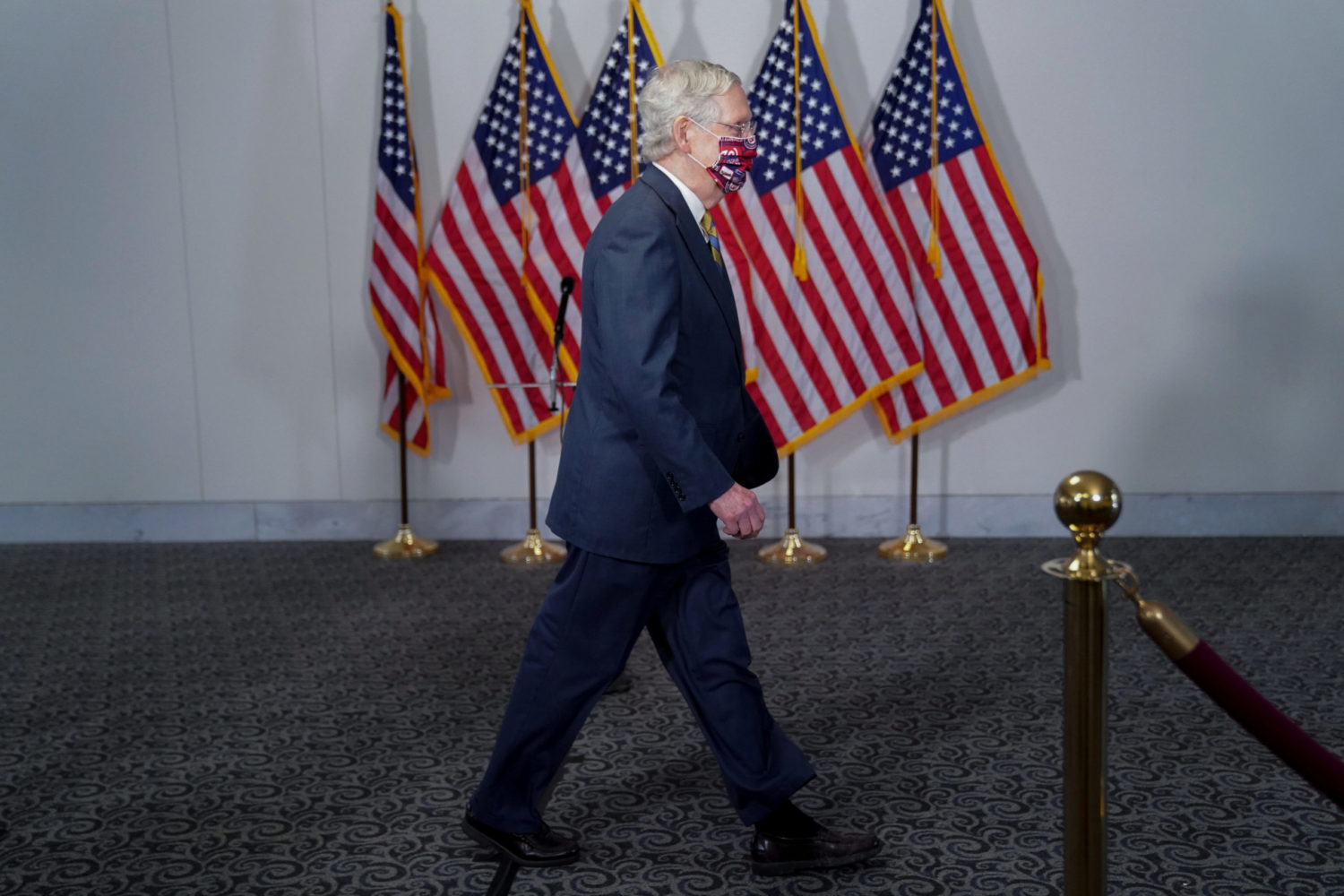 By David Morgan and Patricia Zengerle

WASHINGTON (Reuters) – Republicans in the U.S. Senate pushed back on Tuesday against their own party’s $1 trillion coronavirus relief proposal the day after it was unveiled by Majority Leader Mitch McConnell, sending some U.S. stocks downward.

McConnell and the chamber’s top Republicans unveiled the coronavirus aid package hammered out with the White House just four days before the expiration of expanded unemployment benefits keeping millions of Americans afloat during the crisis. The proposal would slash the federal benefit from $600 per week in addition to state unemployment, to $200.

Democrats have also rejected the package, calling it too small compared with their $3 trillion plan that passed the House of Representatives in May. Dissident Republicans criticized its expense.

McConnell touted the proposal as a “tailored and targeted” plan to reopen schools and businesses, while protecting companies from lawsuits.

Some U.S. stocks dropped as investors worried about the resurgence in coronavirus cases and awaited progress on the relief plan. [.N]

Republican Senator Lindsey Graham estimated that half the party’s members in the Senate would oppose the plan.

“I think if Mitch can get half the conference that’d be quite an accomplishment,” Graham told reporters. Graham said he considers this a war against the coronavirus. “You have to spend money when you’re in a war.”

The Republican proposal would give many Americans direct payments of $1,200 each, provide billions in loans to small businesses, support hospitals and help schools reopen.

The federal supplemental unemployment benefit has been a financial lifeline for laid-off workers and a key support for consumer spending. Democrats quickly denounced the proposed cut as draconian when millions of Americans cannot return to shuttered workplaces.

Many Republicans insist the unemployment payout encourages Americans to stay home rather than go back to work by paying them more than their previous wages. Their proposal would provide the $200 weekly payment in place until states create a system to provide a 70% wage replacement for laid-off workers.

Democrats said the $200 plan would damage the economy.

“People want to work, Republican friends. They just don’t have jobs to do it. We’re not going to let them starve while that happens,” Senate Democratic leader Chuck Schumer said.

Democrats also want money for state and local governments, which face multi-billion dollar budget shortfalls, with businesses closed and residents out of work.

“Our residents, our businesses, our families, they need direct federal support now,” said Savannah, Georgia, Mayor Van Johnson, one of a group of Democratic and Republican mayors on a conference call with reporters.

Bipartisan lawmakers questioned why funds for some programs that seemed to have nothing to do with the pandemic – such as $1.8 billion for a new Federal Bureau of Investigation headquarters – were in the proposal.

Schumer and Democratic House Speaker Nancy Pelosi were due to meet later on Tuesday with Treasury Secretary Steven Mnuchin, who had lunch with Republican senators.

The partisan wrangling comes as U.S. coronavirus cases have passed 4.3 million, with nearly 150,000 people killed in the country, and tens of millions out of work.

The Democratic-led House in May passed its $3 trillion coronavirus relief bill known as the “HEROES Act,” but the Republican-led Senate would not consider it.

McConnell acknowledged that the Republican “HEALS Act” was just a starting point for negotiations, and would need bipartisan support to become law.

“The HEALS Act is full of provisions that I would frankly dare my Democratic colleagues to actually say they oppose,” McConnell said. 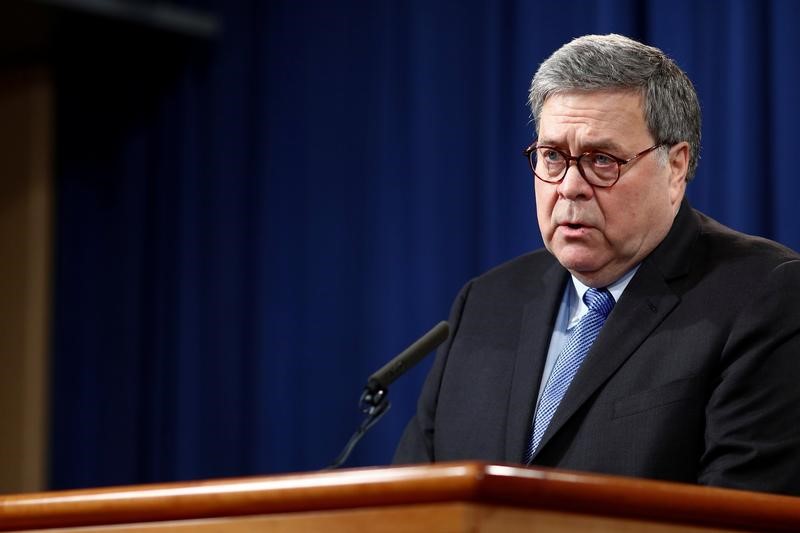 WASHINGTON (Reuters) – U.S. Attorney General William Barr on Monday confirmed that the Justice Department has received information from President Donald Trump’s personal lawyer Rudy Giuliani ahead of the November election, but that anything originating from Ukraine should not be taken “at face value.”

Barr spoke at a news conference a day after Senate Judiciary Committee Chairman Lindsey Graham said on the CBS News program “Face the Nation” that the department had created a process so that Giuliani could provide information and the department would see if it could be verified.

Last week, the Senate acquitted Republican Trump largely along party lines on impeachment charges that he had abused his power by asking Ukraine to investigate a political rival, former Vice President Joe Biden, and his son Hunter Biden, who had served on the board of a Ukrainian energy company.

Trump had based his demands on unfounded allegations of corruption. The Democratic-led U.S. House of Representatives said Giuliani, a former prosecutor, sought information about the Bidens in Ukraine.

On Monday, Barr said that the Justice Department has created an “intake process in the field” that will be used to assess the “provenance and credibility” of any information.

“That is true for all information that comes to the department relating to the Ukraine, including anything Mr. Giuliani might provide,” he added.

Although the department acknowledged on Monday it is receiving and scrutinizing such materials, the FBI’s No. 2 official still stopped short of saying whether it had led to a more formal investigation into the Bidens.

Graham said he would refrain from his own probe of the Bidens and concentrate instead on the Foreign Intelligence Surveillance Court’s decision to issue warrants that led to a federal investigation into allegations that Trump’s 2016 presidential campaign colluded with Russia to interfere in that election.