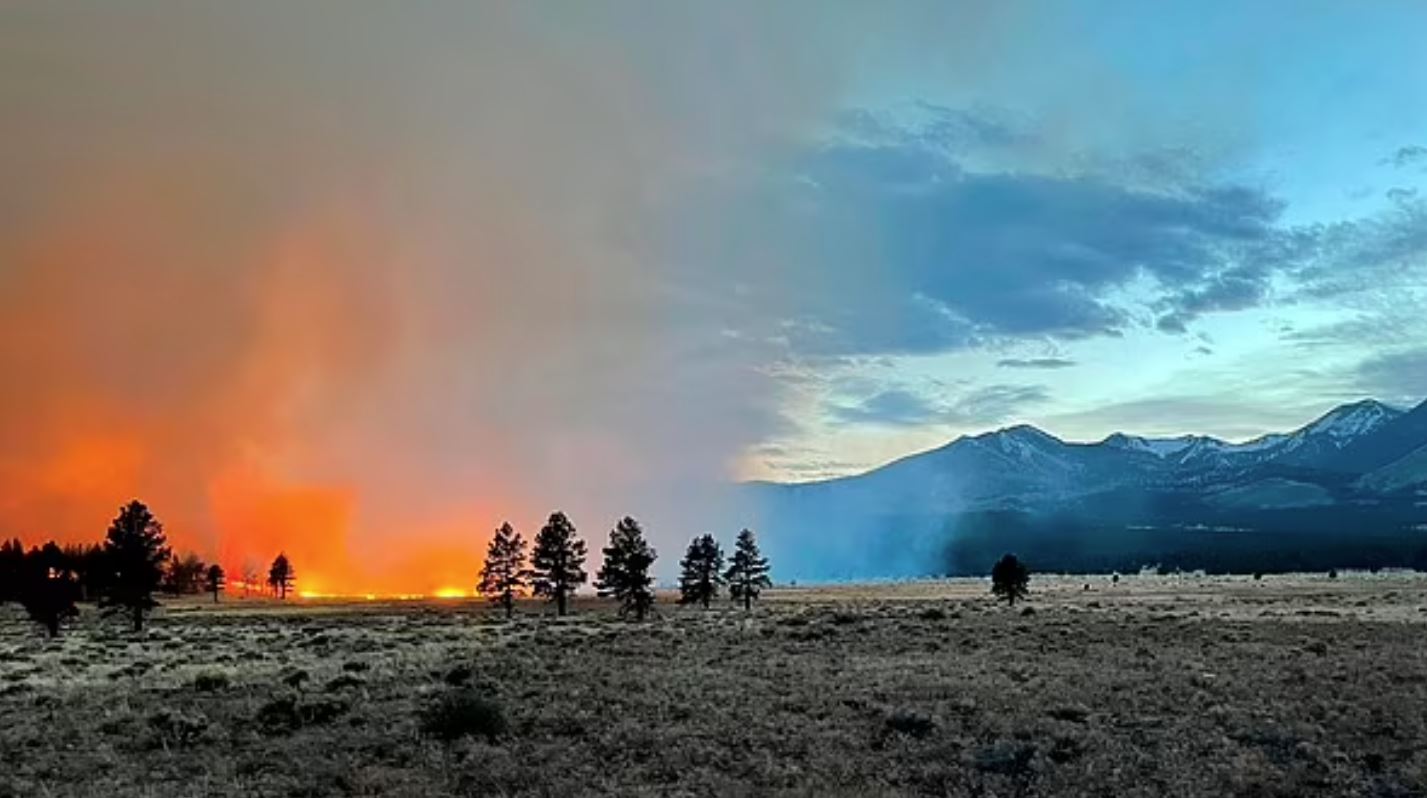 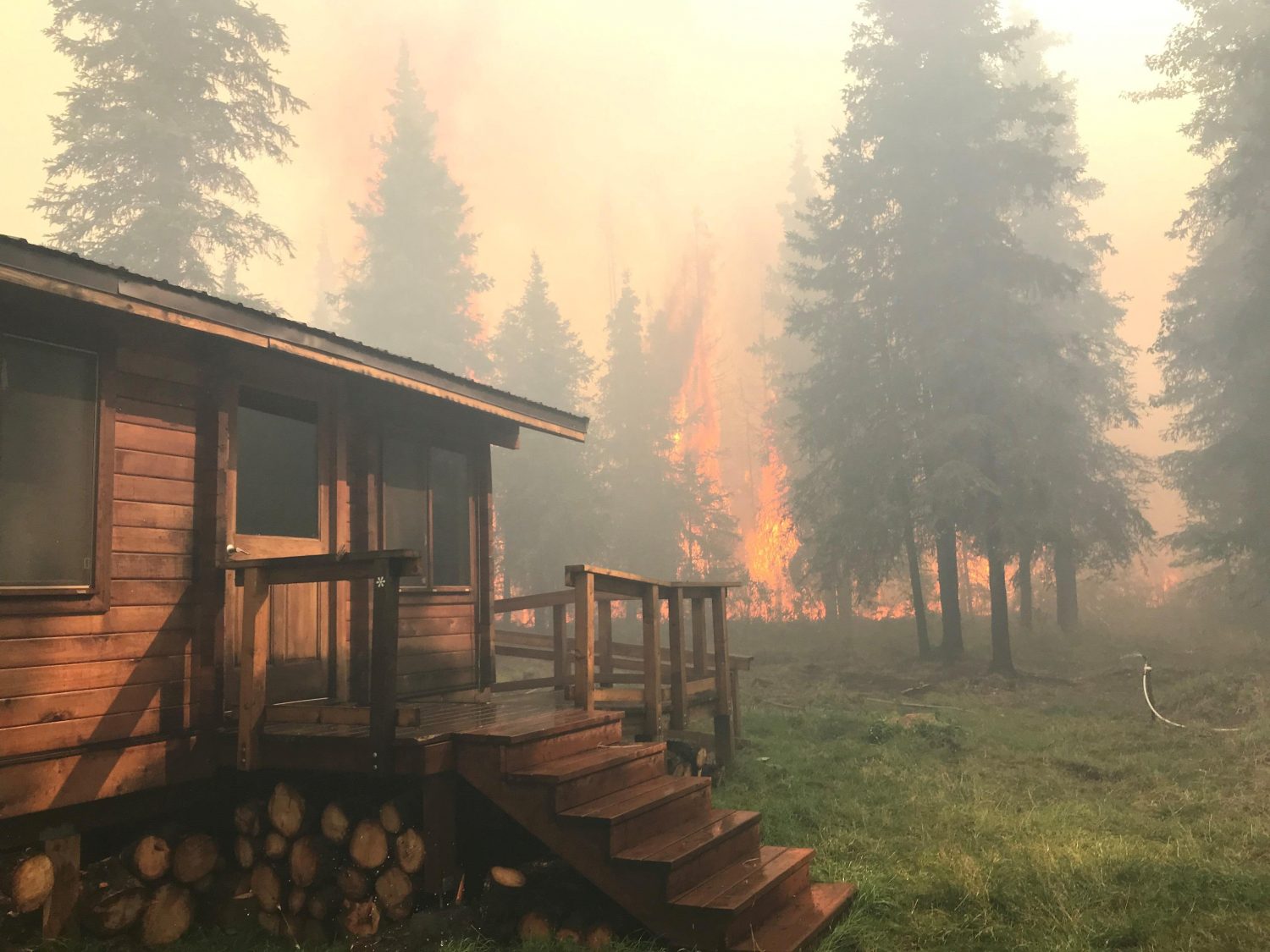 SEWARD, Alaska (Reuters) – Leaves in Alaska are changing color and the rainy season is supposed to begin, but wildfires are raging on in an unusually long and fierce fire season that scientists say is linked to the far north’s long-term climate warmup.

The most serious blaze is the Swan Lake Fire on the Kenai Peninsula south of Anchorage, which had grown to over 160,000 acres (64,750 hectares) by Thursday and the 3,300-acre (1,335- hectare) McKinley Fire north of Anchorage.

Billowing smoke from the Swan Lake Fire has sent particulate pollution levels in the Kenai Peninsula to some of the worst measured anywhere in the world. Ignited by an early June lightning strike, the fire has snarled traffic and nearly shut down tourism in an area famous for its outdoor recreation.

In the port town of Seward, thick smoke blowing south from the Swan Lake fire blotted out the normally spectacular views of mountains and glaciers and forced cancelation of tourists’ excursions.

“What can you do? Global warming,” said Marlee Hernandez at Exit Glacier Tours in Seward.

“It’s been kind of a botched summer,” said Joe Drevets, who was working behind the counter at Seward’s Sea Bean Café.

The McKinley Fire has destroyed more than 130 structures, 51 of them primary homes, and displaced hundreds of people in the woodsy area, about 80 miles (130 km) north of Anchorage. It was 71-percent contained on Thursday and officials were allowing evacuated residents to return, but 560 firefighters remained on duty.

Big fire years are more frequent as Alaska warms at a rate at least twice the global average. This is the 15th time in the past 80 years that more than 2 million acres (810,000 hectares)burned in a single season, and six of those years have been since 2000, said Tim Mowry, a spokesman for the Alaska Division of Forestry.

Especially remarkable are the ultra-dry and dangerous conditions in Alaska’s most populous region, with some wildfires breaking out this summer even within city limits.

“I’ve been here 40 years, and this is the most extreme fire condition here that I can remember,” said John See, a wildfire expert with the Anchorage Fire Department.

Until this year, there had never been a “severe drought” declaration for Anchorage in the two-decade history of the U.S. Drought Monitor. Anchorage and fire-stricken areas to the north and south of the city passed that threshold earlier this month and moved last week to the more serious “extreme” drought condition.

The fires are part of a summer of extremes in Alaska – record heat, lightning strikes in unlikely places, extraordinary meltdown of glaciers and widespread die-offs of animals, including whales, seals, birds and masses of pre-spawned salmon killed in waters with temperatures measured as high as 80 degrees F (26.7 C).

A late arrival of winter is almost a lock, said Brian Brettschneider, a climatologist with the University of Alaska Fairbank’s International Arctic Research Center.

“Even if our temperatures turned on a dime, there’s so much warmth in the water around Alaska that it is just going to take time for that to dissipate,” Brettschnider said.

After that, the winter ice that forms is likely to be thin, vulnerable to another early spring melt, leaving open waters to draw in more solar heat and feeding the warming cycle, he said. 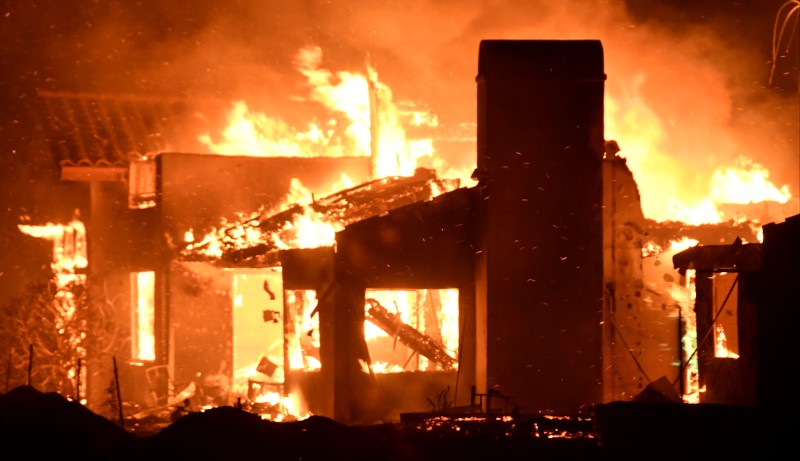 LOS ANGELES (Reuters) – Santa Barbara County officials declared a local emergency on Saturday as a fast-moving wildfire driven by strong winds and triple-digit temperatures destroyed 20 homes and other structures and forced thousands of residents to evacuate.

The Holiday Fire, one of more than three dozen major blazes burning across the U.S. West, broke out on Friday evening near the beach community of Goleta, California, west of Santa Barbara, and raced through the seaside foothills. 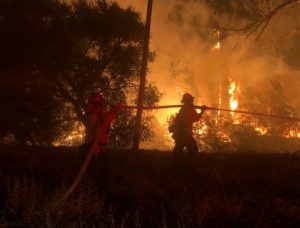 Firefighters work at the site of a wildfire in Goleta, California, U.S., July 6, 2018 in this image obtained on social media. Mike Eliason/Santa Barbara County Fire/via REUTERS

The flames forced more than 2,000 people to flee their homes, and left thousands more without power, prompting the emergency declaration which frees additional funds for the firefighting effort.

Some 350 firefighters took advantage of a period of light winds early on Saturday to contain as much as possible of the blaze, which has burned through 50 to 80 acres (20 to 32 hectares), fire officials said.

“It was a small fire but it had a powerful punch to it,” Santa County Fire spokesman Mike Eliason said. “We’re going to hit it hard today.”

Winds were expected to pick up again as temperatures rise in the afternoon, he said.

Dozens of blazes have broken out across the western United States, fanned by scorching heat, winds and low humidity in a particularly intense fire season.

This year’s fires had burned more than 2.9 million acres (1.17 million hectares) through Friday, already more than the annual average of about 2.4 million acres (971,000 hectares) over the last 10 years, according to the National Interagency Fire Center.

On Friday, the remains of an unidentified person were found near a home burned to the ground by the Klamathon fire, which broke out on Thursday near California’s border with Oregon. It marked the first fatality of the fire season in California. 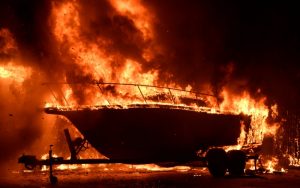 A boat burns as fast-moving wildfire that destroyed homes driven by strong wind and high temperatures forcing thousands of residents to evacuate in Goleta, California, U.S., early July 7, 2018. REUTERS/Gene BlevinsThe Klamathon, which has destroyed 15 structures and blackened nearly 22,000 acres (8,900 hectares), was only 5 percent contained as of Saturday.

Some 3,660 firefighters faced with inaccessible terrain, high temperatures and low humidity, were battling the fire, which was only 48 percent contained. It has destroyed 10 structures, damaged two and threatened 110.

In Colorado, officials said fire crews had made “much progress” battling the Spring Creek fire, which broke out on Juornia, ne 27 and has consumed 106,985 acres (43,295 hectares). It was 43 percent contained on Saturday, the officials said.