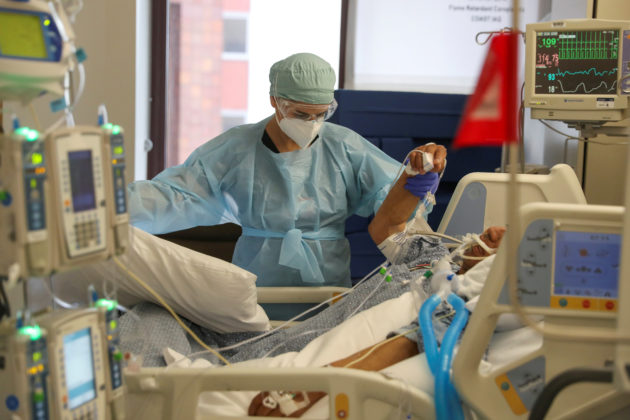 FILE PHOTO: Co-director of the intensive care unit at CommonSpirit's Dignity Health California Hospital Medical Center, Dr. Zafia Anklesaria, 35, who is seven months pregnant, attends to a COVID-19 patient in the hospital where she works, during the coronavirus disease (COVID-19) outbreak, in Los Angeles, California, U.S., May 18, 2020. REUTERS/Lucy Nicholson

(Reuters) – Here’s what you need to know about the coronavirus right now:

‘Show me the data’

The report on Tuesday of a powerful treatment for the new coronavirus brought skepticism along with optimism among U.S. doctors, who said the recent withdrawal of an influential COVID-19 study left them wanting to see more data.

Researchers in Britain said dexamethasone, used to fight inflammation in other diseases, reduced death rates of the most severely ill COVID-19 patients by around a third, and they would work to publish full details as soon as possible.

One influential COVID study was withdrawn this month by respected British medical journal The Lancet over data concerns.

“We have been burned before, not just during the coronavirus pandemic but even pre-COVID, with exciting results that when we have access to the data are not as convincing,” said Dr. Kathryn Hibbert, director of the medical intensive care unit at Harvard’s Massachusetts General Hospital.

Scores of flights to and from Beijing were canceled, schools shut and some neighborhoods blocked off as officials ramped up efforts to contain a coronavirus outbreak that has fanned fears of wider contagion.

The resurgence of the disease in the Chinese capital over the past six days has upended daily life for many, with some fearing the entire city is headed for lockdown as the number of new COVID-19 cases mounts.

The Beijing outbreak has been traced to the Xinfadi wholesale food center in the southwest of the city.

Health officials attribute the spike to businesses reopening and Memorial Day weekend gatherings in late May. Many states are also bracing for a possible increase in cases after tens of thousands of people took part in protests over the past three weeks to end racial injustice and police brutality.

In Oklahoma, where President Donald Trump plans to hold an indoor campaign rally on Saturday, health officials urged attendees to get tested for the coronavirus before arriving and then to self-isolate following the event and get tested again.

A test for Sweden’s strategy

A municipality in northern Sweden began shutting down public facilities including sports venues, bathhouses and libraries on Wednesday after what it called an alarming spread of COVID-19.

The small municipality of Gallivare, 1,000 km north of the capital and home to about 17,000 people, said on its web page the spread was out of control and dangerous.

Close to 5,000 people have died from the disease in Sweden but deaths have slowed considerably since the peak in April.

Unlike most other countries in western Europe, Sweden opted against a full lockdown, keeping most schools and nearly all businesses open while seeking to leverage mostly voluntary restrictions and recommendations on social distancing.

After the cancellation of hundreds of Pride parades due to the COVID-19 pandemic, national Pride networks have set up a new digital Global Pride day on June 27 to unite people all over the world in celebration and support.

The 24-hour stream of music, performances and speeches will feature politicians including U.S. presidential hopeful Joe Biden and Canadian Prime Minister Justin Trudeau and spotlight the challenges faced in some countries by LGBTI+ individuals, many of which have increased since the start of the pandemic.

“A lot of people, especially young people, have had to go back maybe to their families who might not be supportive or they had to go back to their home town which might be a bit more conservative,” said Ramses Oliva, 24, a trans gay man who is an ambassador for charity ‘Just Like Us’ which supports LGBT+ young people.