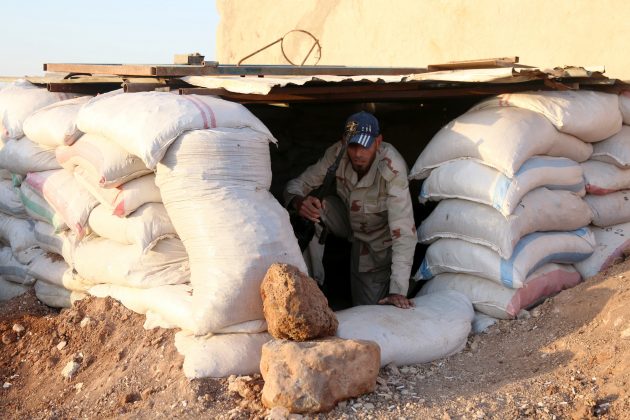 A Free Syrian Army fighter takes a position in the eastern part of the rebel-held town of Dael in Deraa Governorate, Syria, June 8, 2017. REUTERS/Alaa Al-Faqir

AMMAN (Reuters) – The United States and Russia are quietly holding talks on creating a “de-escalation zone” in southwestern Syria, Western diplomats and regional officials said, but could face fierce opposition from Iran.

The Russian and U.S. special envoys for Syria, Alexander Lavrentiev and Michael Ratney, and other officials have met at least twice in the Jordanian capital Amman in the past two weeks and will talk again soon, the officials and diplomats said.

The talks are at an early stage of discussing the boundaries of the proposed de-escalation zone in Deraa province, on the border with Jordan, and Quneitra, which borders the Israeli-occupied Golan Heights, they said.

Diplomats say the talks could represent a major new attempt by Washington and Moscow, Syria’s main foreign backer, to reach an understanding on how to end six years of conflict which the Syrian Observatory for Human Rights, a Britain-based war monitor, estimates has killed close to half a million people.

Iran, Russia and Turkey brokered a deal in the Kazakh capital, Astana, in May to create four de-escalation zones in Syria. But the United States wants no role in the southwest, Russia’s ally in the war, the diplomats said.

Washington has misgivings about the Astana talks and wants to forge a bilateral understanding with Moscow in an area of strategic interest to the United States and its allies, Jordan and Israel.

“The Americans are talking to the Russians and proposing a deconfliction zone outside the Astana process without the Iranians and their proxies,” said one senior diplomat.

The United States is proposing a de-escalation zone covering areas held by both rebel and government forces that could eventually turn into a safe area, the envoys and officials said.

“The two sides are in the process of drafting its borders… and which outside forces will be on the ground. But there are many flaws on how to implement it,” said a regional intelligence official who is familiar with the talks but is not authorized to speak publicly.

Time may be of the essence. Lebanon’s Hezbollah, which is supported by Iran, is expanding its foothold in the southwest and dozens of raids this week by the Syrian army and new troop deployments by Hezbollah in Deraa city were intended to pre-empt or wreck any agreement, a Western intelligence source said.

The Kremlin and the Russian Foreign Ministry did not immediately respond to requests for comment.

A U.S. State Department official said: “We have nothing to announce regarding reports of discussions about southern Syria. The United States remains committed to supporting a diplomatic resolution to the Syrian conflict, one which can bring about a more representative and peaceful Syria, free of terrorism.”

Under the Astana accord, de-escalation was envisaged as the halt of hostilities between government forces and opposition groups and the creation of conditions for humanitarian access, medical assistance, the return of displaced civilians to their homes and restoration of damaged infrastructure.

Safe zones should be guaranteed by all parties to a conflict.

U.S. officials have told the Russian negotiators that the Syrian army and Iranian-backed troops are exploiting the Astana agreement to free up additional troops for other battles, the source familiar with the negotiations said.

The United States has taken a tough stance against Tehran under President Donald Trump. But Iran and allied militias are integral to groups supporting Syrian President Bashar al-Assad.

Although Trump has voiced support for safe zones in Syria, Washington opposes Iran’s involvement as a guarantor of the de-escalation zones set out in the Astana accord, and regards Assad’s track record in upholding previous agreements as poor.

In the talks with Moscow, Washington has proposed a halt in military offensives by Western-vetted rebels who control swathes of Deraa and Quneitra, a regional intelligence official said. Jordan’s role in the deal is important because of its leverage over rebels in that area.

Deraa and Quneitra are home to tens of thousands of people and form a center of the insurgency against Assad. They are a potential launchpad for rebel attacks on the Syrian capital Damascus, 40 miles (64 km) to the north.

U.S. enthusiasm to push the deal depends on Russia forcing the Iran-backed militias to leave the area. “Iran and its proxies have to be out of this zone. This is key to the deal being proposed,” he said.

Regional tensions are on the rise and the warfare in southern Syria has worsened, pitting Western-backed rebels around the Tanf base near the border with Iraq against Syria’s army and militias backed by Iran.

There are doubts in the West that Russia can rein in the growing involvement in the region of Iran and its allies, two senior diplomats familiar with the talks said.

There are other difficulties. Jordan wants a deal that keeps the Deraa front quiet and eases the plight of civilians under the threat of army bombardment. But it has rejected a Russian proposal for its troops to police the proposed de-confliction zone, another regional source said.

(Additional reporting by Tom Perry in Beirut, Maria Tsvetkova in Moscow and Yeganeh Torbati in Washington, Editing by Timothy Heritage)