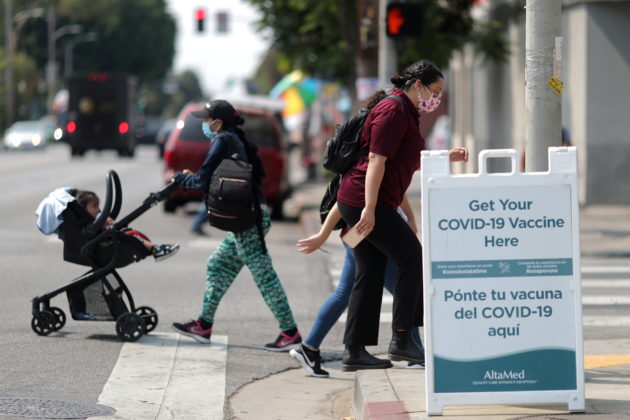 CHICAGO (Reuters) – Some 25% of SARS-CoV-2 infections among Los Angeles County residents occurred in fully vaccinated residents from May through July 25, a period that includes the impact of the highly transmissible Delta variant, U.S. officials reported on Tuesday.

The data, published in the U.S. Centers for Disease Control and Prevention’s weekly report on death and disease, shows an increase in so-called “breakthrough” infections among fully vaccinated individuals.

The CDC is relying on data from cohorts, such as the Los Angeles County study, to determine whether Americans need a third dose of COVID-19 vaccines to increase protection. Government scientists last week laid out a strategy for booster doses beginning on Sept. 20, pending reviews from the U.S. Food and Drug Administration and the CDC.

The vaccines did, however, protect individuals from more severe cases. According to the study, 3.2% of fully vaccinated individuals who were infected with the virus were hospitalized, just 0.05% were admitted to an intensive care unit and 0.25% were placed on a ventilator.

Among the unvaccinated who fell ill, 7.5% were hospitalized, 1.5% were admitted to an intensive care unit and 0.5% required breathing support with a mechanical ventilator.

In addition to the LA County data, the CDC on Tuesday released an update on the HEROES cohort study among healthcare workers that showed a significant drop in vaccine effectiveness among vaccinated frontline workers in eight states who became infected with the coronavirus.

Vaccine efficacy during the period of the study when Delta was predominant fell to 66% from 91% prior to the arrival of the Delta variant, according to the report.