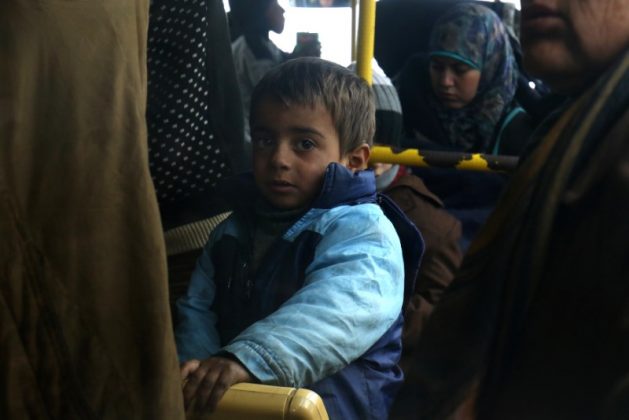 Evacuees from the Shi'ite Muslim villages of al-Foua and Kefraya ride a bus at insurgent-held al-Rashideen in Aleppo province, Syria December 22, 2016. REUTERS/Ammar Abdullah

By Stephanie Nebehay and Suleiman Al-Khalidi

GENEVA/AMMAN (Reuters) – A senior United Nations official warned on Thursday that thousands of people evacuated from rebel-held areas of Aleppo after a crushing government offensive could suffer the same fate in their new place of refuge outside the city.

U.N. Special Envoy Staffan de Mistura said a cessation of hostilities across Syria was vital if another battle like the bloody fight for Aleppo was to be avoided.

At least 34,000 people, both civilians and fighters, had been evacuated from east Aleppo in a week-long operation, the latest U.N. figures show.

“Many of them have gone to Idlib, which could be in theory the next Aleppo,” de Mistura warned in Geneva.

Thousands of refugees from Aleppo were ferried to Idlib, arousing fears that the rebel-held city in northwestern Syria could be next. Syrian President Bashar al-Assad has declared that the war is far from over and that his armed forces would march on other rebel-held areas.

Evacuees from Aleppo had expressed concerns about being taken to Idlib and a senior European diplomat said earlier this month that this would suit Russia, Assad’s main military backer, as it would put “all their rotten eggs in one basket”.

Assad said that regaining full control of Aleppo was a victory shared by his Russian and Iranian allies.

The last group of civilians and rebels holed up in a small enclave was expected to leave in the next 24 hours, with the Syrian army and its allies seizing all of the city, delivering the biggest prize of the nearly six-year war to Assad.

In comments after meeting a senior Iranian delegation, Assad said his battlefield successes were a “basic step on the road to ending terrorism in the whole of Syria and creating the right circumstances for a solution to end the war”.

Russia’s air force conducted hundreds of raids that pulverized rebel-held parts of Aleppo while Iranian-backed militias, led by the Lebanese group Hezbollah, poured thousands of fighters to fight rebels into the city.

Defence Minister Sergei Shoigu said on Thursday that Russian air strikes in Syria had killed 35,000 rebel fighters and halted a chain of revolutions in the Middle East.

Speaking at a gathering of senior military officials that appeared designed to showcase Russia’s military achievements, Shoigu said Moscow’s intervention had prevented the collapse of the Syrian state.

More fighters were evacuated overnight from east Aleppo to opposition-held areas under an agreement between the warring sides, the International Committee of the Red Cross said.

“In one of the last stages of the evacuation, more than 4,000 fighters were evacuated in private cars, vans, and pick-ups from eastern Aleppo to western rural Aleppo,” ICRC spokeswoman Krista Armstrong said.

This brought to around 34,000 the total number of people evacuated from the district over the past week in an operation hampered by heavy snow and wind, she said.

“The evacuation will continue for the entire day and night and most probably tomorrow (Friday). Thousands are still expected to be evacuated,” Armstrong said.

“Most are heading towards camps, or to their relatives, or shelter locations,” said Ahmad al-Dbis, a medical aid worker heading a team evacuating patients from Aleppo. “The humanitarian situation in northern Syria is very difficult, because the area is already densely populated since it has people displaced from all over Syria.”

Those leaving Aleppo are not only going to Idlib, the name of a city and province southwest of Aleppo, but to villages in the countryside in Aleppo province that lies west and north of the city and has also been heavily bombed.

Ahmed Kara Ali, spokesman for Ahrar al Sham, a rebel group that is involved in departure negotiations, told Reuters “large numbers” were left but it was difficult to estimate how many remained, beyond it being in the thousands.

Hundreds of other people are also still being evacuated from two villages besieged by rebels near Idlib and taken to government lines in Aleppo, part of the deal that has allowed insurgents to withdraw from the city carrying light weapons.

Another rebel official said a heavy snow storm that hit northern Syria and the sheer numbers of civilians still remaining were among the factors behind the delay in the mass evacuation.

“The numbers of civilians, their cars alongside and of course the weather all are making the evacuation slow,” Munir al-Sayal, head of the political wing of Ahrar al Sham, said, adding he expected the operation to be completed on Thursday.

The tiny pocket they are fleeing is all that remains of a rebel sector that covered nearly half the city before being besieged in the summer, the cue for intense air strikes that reduced swathes of it to rubble. As the months of bombardment wore on, rescue and health services collapsed.

The once-flourishing economic center with its renowned ancient sites has been devastated during the war which has killed more than 300,000 people, created the world’s worst refugee crisis and allowed for the rise of Islamic State. 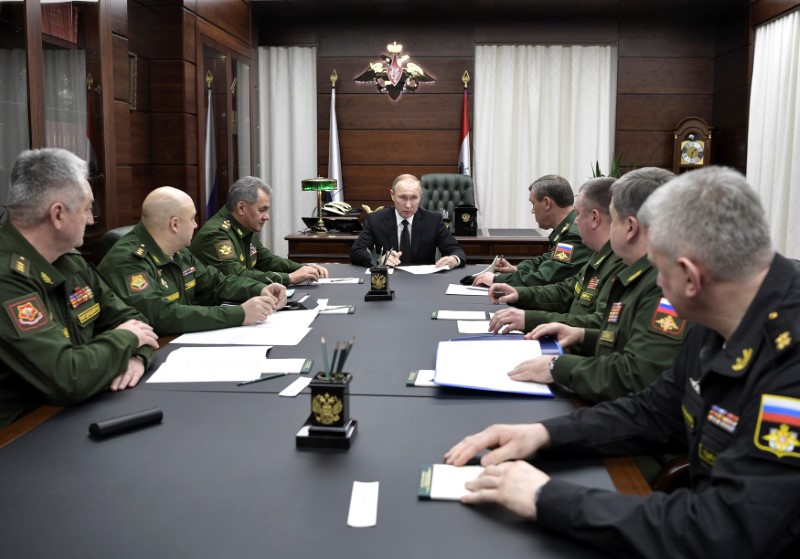 Russia is not discussing the future of Assad in its talks with Iran and Turkey, Deputy Foreign Minister Sergei Ryabkov said.

The foreign and defense ministers of Russia, Iran and Turkey met in Moscow on Tuesday and agreed to help broker a new peace deal for Syria.

De Mistura said that cessation of hostilities across Syria was a “priority” and having “regional players like Turkey, Russia and Iran talk to each other is a good thing”.

Quoting Russian President Vladimir Putin, de Mistura said talks expected to be held in Kazakhstan were “not considered a competition, it is complementary and a support to the preparation of the U.N. role (in Syrian peace talks) on 8 Feb.”

(Reporting by Suleiman Al-Khalidi in Amman, Peter Hobson in Moscow, Stephanie Nebehay in Geneva and Ellen Francis in Beirut, writing by Peter Millership and Giles Elgood)