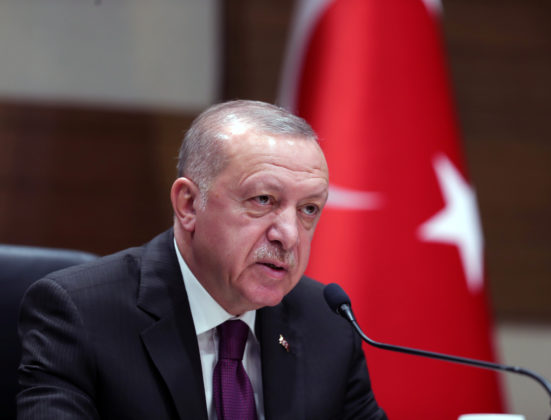 FILE PHOTO: Turkish President Tayyip Erdogan speaks during a news conference ahead of a visit to Algeria, at Ataturk airport in Istanbul, Turkey, January 26, 2020. Presidential Press Office/Handout via REUTERS

Renewed bombardments by Russia-backed Syrian government forces on Idlib have raised concern of a new refugee wave from the area which borders Turkey and is home to 3 million people.

Turkey and Russia, which support opposing sides in Syria, agreed to work toward de-escalating the fighting in Idlib and creating a demilitarized zone under agreements in 2017 and 2018 known as the Astana and Sochi accords.

But fighting has continued in the last remaining rebel bastion in country’s nearly nine-year war despite several other agreements for a ceasefire, as recently as this month.

“Currently, Russia is not abiding by Astana or Sochi,” NTV quoted Erdogan as saying.

Speaking to reporters on his flight back from Senegal, he said Turkey, which is building houses in northern Idlib to shelter civilians fleeing the bombing, has told Russia that it is running out patience.

“If we are loyal partners with Russia on this, they have to put forth their stance… Our wish is that Russia immediately makes the necessary warnings to the regime which it sees as a friend,” he said.

On Tuesday, Syrian government forces entered a town in the south of Idlib city, in a significant advance for President Bashar al-Assad. Turkey said it would retaliate against any attack on its 12 observation posts around Idlib.

The Syrian Observatory for Human Rights, a UK-based war monitor, said a Turkish military convoy of 30 vehicles, including 12 armored vehicles, entered Syria on Monday evening and was expected to establish a new observation post south of the town of Saraqeb in Idlib.