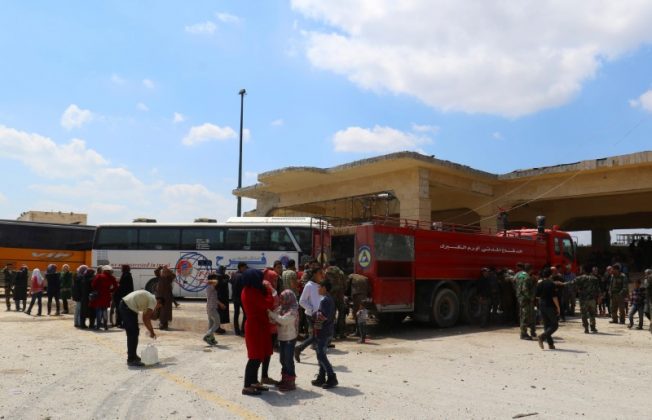 People, who were evacuated from the two rebel-besieged Shi'ite villages of al-Foua and Kefraya, stand near buses at insurgent-held al-Rashideen, Aleppo province, Syria April 19, 2017. REUTERS/Ammar Abdullah

AMMAN (Reuters) – A Russian-brokered deal has been reached to evacuate a Syrian rebel group from a town in eastern Ghouta, opposition sources and officials said on Wednesday, the first such deal in the remaining rebel bastion near the capital.

Fighters from the Ahrar al Sham rebel group in control of the besieged town of Harasta had agreed to lay down arms in return for safe passage to opposition-held northwestern Syria and an offer to be pardoned under reconciliation terms with the authorities for those who want to stay, the sources said.

There was no indication when the deal would be implemented and one source familiar with the talks said obstacles may delay it for a few days.

Russia’s Defence Ministry said on Wednesday it had opened a new “humanitarian corridor” near Harasta but did not indicate that this could be part of any rebel pullout deal.

The Syrian army and allied forces have recaptured 70 percent of the territory that was under insurgent control in the enclave and after weeks of bombardment residents are fleeing by the thousands.

The Syrian army assault backed by Russian air power that began last month has killed hundreds of people as air strikes pound residential areas where thousands had sheltered in basements across the densely populated enclave, according to rescuers and a monitor.

Years of siege and bombardment have been a strategy by the Syrian army to force rebels to surrender and help Syrian President Bashar al-Assad recover all of Aleppo, Homs and other areas.

“The deal has been finalised and it could come into effect soon after a ceasefire is announced as early as Wednesday,” said one official familiar with the talks.

It would begin with an evacuation of injured civilians, he added, saying the remaining civilians in the town were “facing untold suffering.” 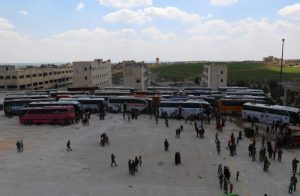 People, who were evacuated from the two rebel-besieged Shi’ite villages of al-Foua and Kefraya, stand near buses at insurgent-held al-Rashideen, Aleppo province, Syria April 19, 2017. REUTERS/Ammar Abdullah

A pro-Assad commander confirmed a deal between the Russians and Ahar al Sham had been concluded with an evacuation of wounded from Harasta expected on Wednesday, followed by civilians and fighters evacuated to rebel-held Idlib in northwestern Syria in the “coming days.”

A local official in the opposition-run Harasta council was quoted by opposition news outlets as saying a deal had been reached but did not say when it would be implemented.

Last year, rebels launched an offensive on army barracks on the edge of Harasta that led to retaliatory attacks. The battles were among the fiercest in eastern Ghouta in recent years.

Assad has vowed to end what he says is a terrorist threat near his seat of power in Damascus. Syrian authorities accuse rebels of firing rockets into the suburbs in revenge attacks, which rebels deny.

More than 100 civilians were killed in the last two days of air strikes in eastern Ghouta with most of the raids on Douma city, the largest population center with more than 150,000 people still living there.

Rebels and residents say napalm and incendiary weapons were dropped on several civilian areas to force rebels to surrender.

The Syrian army this month splintered Ghouta into three besieged zones, cutting off Harasta from other areas. The Syrian army had given the rebels of Harasta an ultimatum to withdraw, state media said..

Residents and rescuers say the Russian air force stepped up bombing of Harasta town as talks were going on to broker the deal. Securing the town, near the closed Damascus-Homs highway, will allow the army to make further gains in the remaining parts of the enclave in rebel hands.

“They bomb us to force us to leave our homes and everything behind us and say imminent death faces those who stay,” Iyad Abdul Aziz, head of the local council in Douma, told Reuters.

The plight of civilians in the de facto capital of eastern Ghouta had worsened after air strikes on Sunday on a main warehouse that had stocked United Nations goods delivered this month, Abdul Aziz said. The council has said the city faced “catastrophic conditions”.

The Harasta deal will pile pressure on the two main rebel groups – Failaq al-Rahman in the southern pocket and Jaish al-Islam in the northern enclave – to also reach understandings.

They have said they reject Russia’s offer to leave the enclave but have agreed to evacuation deals to get hundreds of sick and wounded civilians out under U.N. auspices.

But the most likely option was the transfer of Failaq al-Rahman and Jaish al-Islam fighters to opposition-held areas in northern and southern Syria, a rebel official said.

Defeat in eastern Ghouta would mark the worst setback for the anti-Assad rebellion since the opposition was driven from eastern Aleppo in late 2016 after a similar campaign of siege, bombing, ground assault and the promise of safe passage out.

The Western-backed Free Syrian Army (FSA) has said Syrian troops alongside Iranian-backed militias were reinforcing positions in their strongholds in the southern Deraa province where rebels have control of most of the countryside.

Western diplomats and Jordan, which borders the southern part of Syria, are worried the Syrian army will launch an offensive to regain control of the strategic area that is now covered under a U.S.-Russian deal setting up a “de-escalation” zone that has reduced violence.

(Reporting by Suleiman Al-Khalidi Additional reporting by Maria Kiselyova in Moscow and Laila Bassam in Beirut; Editing by Janet Lawrence)