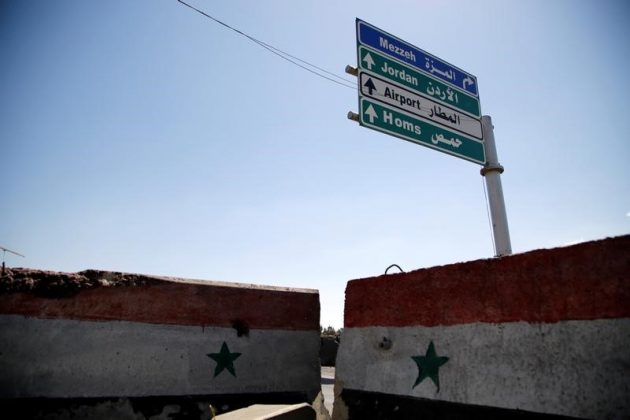 FILE PHOTO: A road sign that shows the direction to Homs is seen in Damascus, Syria April 7, 2017. REUTERS/Omar Sanadiki

HOMS, Syria/BEIRUT (Reuters) – Syrian rebels started leaving the last opposition-held district of Homs city on Saturday in the final phase of an evacuation deal that will see President Bashar al-Assad’s government take back the area.

Fighters took with them their light weapons, as agreed, and boarded buses along with women and children. Many were headed for insurgent-held Idlib province in Syria’s northwest, or the town of Jarablus on the border with Turkey.

At least four buses had left al-Waer by mid-afternoon, and dozens more were expected to follow, to bring more than 2,500 people out of the district long besieged by government forces and their allies in the country’s civil war.

The evacuation of al-Waer is one of the largest of its kind. It follows a number of similar deals in recent months that have brought many parts of western Syria long held by the opposition and besieged by government and allied forces back under Assad’s control.

Syria’s government calls the evacuation deals, which have also taken place in besieged areas around Damascus, and in Aleppo at the end of last year, reconciliation agreements. It says they allow services and security to be restored.

The opposition has criticized the agreements, however, saying they amount to forced displacement of Assad’s opponents away from Syria’s main urban centers, often after years of siege and bombardment.

The United Nations has criticized both the use of siege tactics which precede such deals and the evacuations themselves as amounting to forcible displacement.

The al-Waer deal, backed by Syria’s ally Russia, began to be implemented in March. Thousands of people have left in a several stages. By the time it is completed, up to 20,000 people will have left the district, the British-based Syrian Observatory for Human Rights monitoring group says.

Homs Governor Talal Barazi said the final phase of the evacuation would last some 20 hours, and expected it to be completed late on Saturday or early on Sunday.

“This is the last day. The number of militants expected (to leave) is around 700. With their families the total number could be around 3,000,” he told reporters in al-Waer.

Barazi said at least 20,000 inhabitants remained in al-Waer, and tens of thousands displaced during fighting would begin to return to the neighborhood after the deal was completed.

“Over the next few weeks communications networks will return” as well as electricity and water, he said.

As in other evacuation deals, some rebels have decided to stay in al-Waer and hand over their weapons as Syria’s military and its allies move in.

Young men of conscription age will be required to join the armed forces for military service.

A Russian officer helping oversee the deal’s implementation told reporters Russian military police would help with the transition inside al-Waer.

“Russia has a guarantor role in this agreement. Russian military police will stay, and will carry out duties inside the district,” Sergei Druzhin said through an Arabic interpreter.

Assad’s government, backed militarily since 2015 by Russia and since early on in the war by Iranian-backed militias, has negotiated the pacts from a position of strength and brought Syria’s major urban areas in the west back under its control.

Homs, Syria’s third-largest city before the conflict, was an early center of the popular uprising against Assad in 2011 that turned into a civil war which has killed hundreds of thousands of people and displaced more than 11 million.

As the government brings more areas under its control, rebels still hold pockets of territory around Damascus and in the south, as well as almost all of Idlib province.

Islamic State holds swathes of territory in the east of Syria, and is being fought by separate forces, including U.S.-backed fighters and Russian-backed Syrian troops.