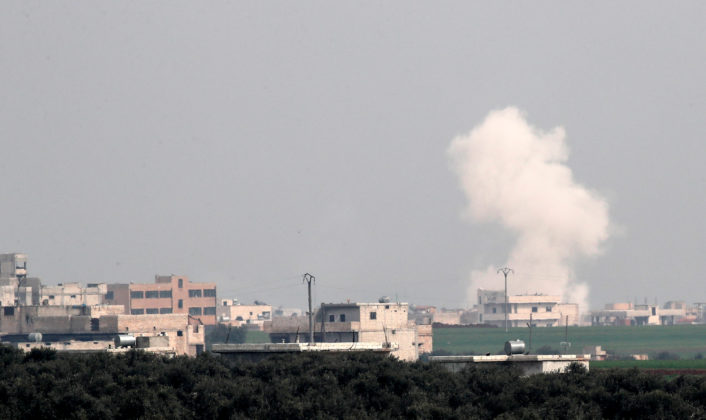 By Orhan Coskun and Suleiman Al-Khalidi

ANKARA/AMMAN (Reuters) – Syrian government forces entered parts of a strategic rebel-held town on Monday, and Turkey said it would keep hitting President Bashar al-Assad’s troops after ramping up operations in its biggest intervention yet into the Syrian civil war.

Turkey and Russia, which have come closer than ever to direct confrontation in Syria in recent days, traded threats over air space after Turkish forces shot down two Syrian government warplanes and struck a military airport.

Fighting has escalated dramatically in recent days in northwest Syria, where Turkey has sent thousands of troops and military vehicles in the last month to counter Syrian government forces’ advances in the last remaining bastion held by rebels.

A million people have been displaced since December near Turkey’s southern border, causing what the United Nations says may be the worst humanitarian crisis in nine years of war.

A Syrian state television correspondent in the town of Saraqeb said the army was combing the town after the retreat of Turkey-backed rebels. Rebel sources said clashes were continuing in western parts of the town. The Syrian Observatory for Human Rights monitor group said rebels were trying to regain control.

Saraqeb has already changed hands twice in less than a month, reflecting its importance as a gateway to the government-controlled northern city of Aleppo and to rebel-held Idlib city to the west.

Turkey, which has backed rebels fighting Assad for much of Syria’s nine-year civil war, stepped up its intervention in response to the killing of 34 Turkish soldiers in Idlib last week, the deadliest strike against the Turkish army in decades.

On Sunday it shot down two Syrian planes in Idlib and struck at least one military airport in Aleppo province, taking the battle deep into territory controlled by forces loyal to Assad.

“The (Syrian) regime’s human and equipment losses are just the beginning,” Turkish President Tayyip Erdogan said in a speech in Ankara. “If they do not withdraw to the borders Turkey has determined as soon as possible, they will not have a head left on their shoulders.”

Russia, for its part, said it could not guarantee the safety of Turkish aircraft over Syria, and Damascus said it was closing Syrian air space over the Idlib region.

Erdogan and his Russian counterpart Vladimir Putin are due to meet in Moscow on Thursday to seek agreement on Idlib.

“We will go to Moscow to evaluate these developments with Mr Putin. My hope is that we take the necessary steps there, whether it is a ceasefire or any other steps needed,” Erdogan said.

Turkey has insisted it seeks no conflict with Moscow, but its barrage of strikes on the Russian-backed forces around Idlib have raised the risk of a direct confrontation.

“A solution is expected to emerge from the talks but attacks and attempts which the (Syrian) regime carries out in this period will not go unanswered,” a senior Turkish security official told Reuters.

Backed by Turkish shelling and drone strikes, rebels say they have now retaken several villages that they lost last week in the Syrian government offensive.

Erdogan demanded in early February that Syrian forces withdraw by the end of the month from a “de-escalation zone” around Idlib agreed by Turkey, Russia and Iran in 2017, or face being driven back by the Turkish military.

“The (Syrian) regime will be forced to leave the de-escalation zone before the Putin-Erdogan meeting,” a senior Syrian opposition source said.

Turkey opened its western borders on Friday to let migrants reach Europe, in an apparent move to demand EU support in Syria by repudiating a 2016 agreement to shut the frontier.

The European Union’s chief executive, Ursula von der Leyen, expressed sympathy with Turkey over the conflict in Syria, but said sending migrants to Europe cannot be the answer.

Turkey had shut the border in return for EU funds under a 2016 deal to end a crisis in which more than a million people entered Europe and 4,000 drowned in the Aegean Sea. On Monday, a child died after being pulled from the sea when a boat capsized off the Greek island of Lesbos, Greek officials said, the first reported fatality since Turkey re-opened its border last week.

More than 1,000 migrants have arrived by sea on Greek islands since Sunday and more than 10,000 have attempted to cross by land at the border, where guards from both sides have fired tear gas into crowds caught in no-man’s land.