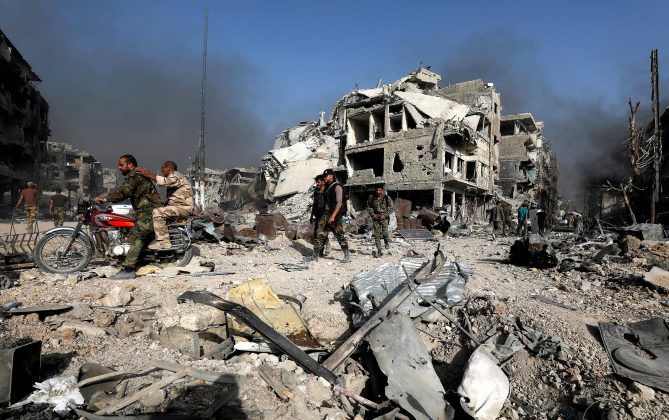 Law 10, passed in April, gave the Damascus government the right to redevelop urban areas that were damaged by war or that were built without formal approval or property deeds, part of its efforts to move toward reconstruction.

The law initially gave people only 30 days after an area was officially slated for redevelopment to prove they owned property there and apply for compensation – a time frame that aid groups said would be impossible for almost all refugees to cope with.

Late on Sunday, Assad issued Law 42, extending this period to a year and adding other amendments including giving claimants more time to appeal verdicts and letting them do so through the normal courts instead of through a dedicated judicial committee.

Those whose property is already registered in the government’s land registry do not have to prove ownership.

Local authorities in Syria have not yet announced which areas they want to redevelop under Law 10, so the impact of the measure or how it may affect property owners have not yet been tested.

During Syria’s seven years of armed conflict half, the pre-war 22 million population have fled their homes, with about five million seeking refuge abroad.

In the chaos of war, many government buildings have been destroyed along with property records, while refugees and other displaced people have lost identity cards or land deeds, meaning it could take a long time to prove property rights.

For refugees abroad, getting power of attorney under Syrian law for a friend or relation back in Syria to apply on their behalf takes a minimum of three months, even if they both have all the right documents.

It also requires security clearance – potentially a problem for people who fled districts that were rebel-controlled before being retaken by government forces.

Countries hosting refugees voiced concern over Law 10, saying its effect might be to prevent refugees from returning if they were to lose their property in Syria.