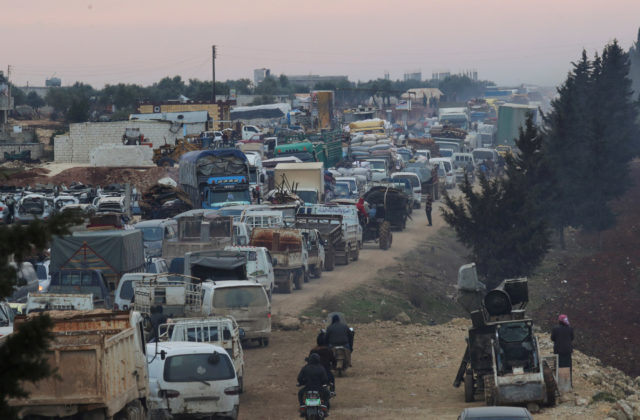 GENEVA (Reuters) – More people have fled fighting in Syria over the past 10 weeks than at any other time in the 9-year-old conflict and the city of Idlib, where many are sheltering, could become a graveyard if hostilities continue, two U.N. agencies said on Tuesday.

Syrian government forces are shelling their way northwards, backed by Russian air strikes, driving people toward the Turkish border as they try to seize remaining rebel strongholds near Idlib and Aleppo.

Turkey, which backs the rebels and is fearful of additional refugees, has retaliated militarily, with displaced civilians caught in between.

“It’s the fastest growing displacement we have ever seen in the country,” Jens Laerke from the U.N. Office for the Coordination of Humanitarian Affairs (OCHA) said, adding that nearly 700,000 people had fled since December, mostly women and children.

Another 280,000 people could flee from urban centers if fighting continues, including from the city of Idlib, which is packed with people who have escaped fighting elsewhere and which has not yet seen a full military assault on its center.

“It has the world’s largest concentration of displaced people and urgently need a cessation of hostilities so as not to turn it into a graveyard,” Laerke added.

Of Syria’s 17 million people, 5.5 million are living as refugees in the region, mostly in Turkey, and a further six million are uprooted within their own country.

Civilians are struggling to find shelter, amid harsh winter conditions with snow, rain and wind from Storm Ciara. Mosques are full and makeshift camps are overcrowded, said Andrej Mahecic, a spokesman for the U.N. refugee agency.

“Even finding a place in an unfinished building has become nearly impossible,” he told journalists in Geneva, describing the humanitarian crisis as “increasingly desperate”.

OCHA has sent 230 trucks over two authorized border crossings in Turkey so far this month, containing food, water and hygiene equipment, Laerke added. Last month, 1,227 trucks were shipped in the biggest cross-border aid operation there since the operation started in 2014.

The U.N. Security Council renewed a six-month program delivering aid to civilians in January but stopped crossings from Iraq and Jordan to avoid a veto from Russia which backs Syrian President Bashar al-Assad. Aid workers say that is restricting their ability to help the displaced.