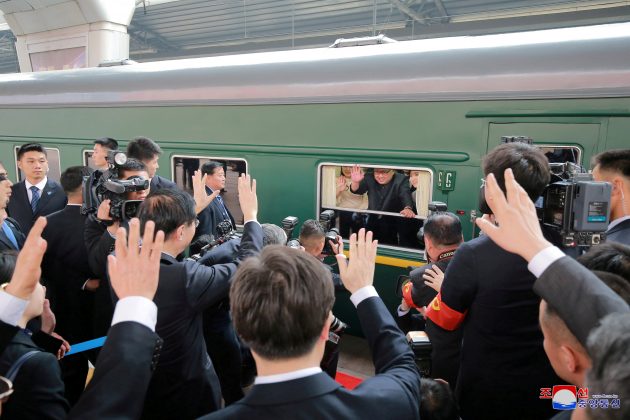 By Brenda Goh and Sue-Lin Wong

SHANGHAI/BEIJING (Reuters) – For a regime obsessed with secrecy, North Korean leader Kim Jong Un’s decision to travel to Beijing on a distinctive green armored train was an all-but-dead giveaway that he was making his first journey abroad since assuming power in 2011.

The historic visit sent officials scrambling to obscure the identity of the 21-car train and its occupants as it meandered across roughly 1,100 km (680 miles) of track through northeast China, causing rare delays along the way and triggering a growing frenzy of speculation as it neared the Chinese capital.

The train arrived at Beijing Station on Monday afternoon and left the following afternoon, with the identity of its occupants only announced on Wednesday morning – after it had crossed back into North Korea at the city of Sinuiju.

Clues that something unusual was afoot emerged in the border city of Dandong, just across the Yalu River from North Korea and linked to the isolated country by the Sino-Korea Friendship Bridge. That bridge bears a single rail track which, it turned out, carried Kim’s train into China late on Sunday.

The Daily NK, a Seoul-based website staffed by North Korean defectors, reported that boards supported by scaffolding had been set up on the platform at Dandong’s train station, blocking what is ordinarily an open view, before two trains passed through the station between 10:20 and 10:40 p.m. on Sunday night.

Yao Jun, who sells car parts in Dandong, said the station was locked down again on Tuesday night, an unusual occurrence. Kim returned to North Korea in the early hours of Wednesday.

“Now we know for next time – if the train station is in lockdown then that means Kim Jong Un has come to China,” Yao told Reuters.

At least one Dandong hotel was told by Chinese authorities not to book rooms facing the bridge, while tours from China into the North were canceled on Sunday, a source familiar with the matter told Reuters. A local resident said that a wedding party along the river on Sunday had been told not to set off firecrackers.

By Monday morning sighting rumors and pictures were making the rounds on Chinese social media, before being blocked or deleted by censors, while railway bureaus began warning travelers to expect delays or cancellations on Monday and Tuesday.

The disruptions were noteworthy in a country with a vast rail network that prides itself on its efficiency, with 98.8 percent of trains departing on time in 2016 and 95.4 percent arriving on schedule, and prompted complaints online.

Zhao Jian, a professor at Beijing Jiaotong University who researches the country’s railway system, said Kim’s train traveled on the regular track network, rather than on the tracks used by the country’s high-speed trains.

“Passenger and freight traffic would have been affected,” he said.

A person answering the official phone line at Dandong station on Thursday stressed that everything had been “normal” this week, and asked, “who told you the station was closed?”

An official in the international cooperation department of the China Railway Corporation declined immediate comment on Kim’s visit.

MANCHURIA AND THE GREAT WALL

China has not disclosed the route taken by Kim in the train – green with a yellow stripe resembling one used by his late father, Kim Jong Il, on his last visit to China in 2011.

Based on photos from the elder Kim’s visit, the only visible difference between the two trains was a license plate. The younger Kim’s license plate showed DF0002; the plate on the train used by his father displayed DF0001.

North Korean state media showed Kim and his entourage, including his wife Ri Sol Ju, seated on stuffed pink sofas inside the train carriage with Song Tao, the head of the Chinese Communist Party’s international affairs department, during their inbound stop in Dandong.

There are at least two likely rail routes between Dandong and Beijing, and an ordinary service takes at least 14 hours, according to Chinese railway timetables. The route is also covered by China’s high-speed trains, which travel on separate tracks, in just over six hours.

But social media posts made by local railway bureaus and ordinary users on social media suggest a surge in delays around the route from Dandong that heads north to Shenyang, in the region previously known as Manchuria. The route then snakes west along the Hebei province coast towards Beijing.

On Monday morning, Weibo users at rail stations in Tangshan and Tianjin began complaining of unexpected cancellations to regular services bound for Beijing, which they said were made without explanation.

In a Weibo post published at 5:14 p.m. on Monday and since deleted, the Beijing Railway Bureau told travelers waiting at stations in Beijing, Tianjin and Shijiazhuang to expect delays of up to two hours for trains from Shenyang and Qinhuangdao.

On Tuesday evening, a Twitter user with the handle “2018you333” posted a grainy video of a train with a single horizontal stripe hurtling across an empty car underpass, which the user said was taken at the Shanhai Pass area, 300 km east of Beijing and a major pass in the Great Wall of China.

“Let’s guess where this distinguished guest is coming from!”, the post said.

Reuters was unable to verify the authenticity of the video.

(Additional reporting by Michael Martina, Philip Wen and the Shanghai and Beijing newsrooms; Editing by Tony Munroe and Alex Richardson)