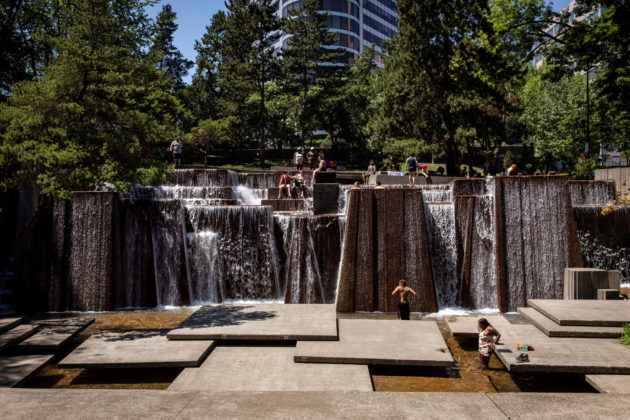 PORTLAND, Ore. (Reuters) – Temperatures were expected to shatter records in the Pacific Northwest again on Monday, bringing the city of Portland to a standstill as residents hunkered down in air conditioned homes or cooling centers.

One day after Portland saw temperatures reach 112 degrees F (44.5 degrees Celsius) on Sunday, the hottest recorded there since daily record-keeping began in 1940, the National Weather Service predicted more of the same for Monday.

“To put it in perspective, today will likely go down in history as the hottest day ever recorded for places such as Seattle, WA and Portland, OR,” the weather service said in its forecast for the region.

The heat has been attributed to a dome of atmospheric high pressure over the upper U.S. Northwest and Canada, similar to conditions that punished California and southwestern states earlier this month.

The Canadian city of Vancouver also set an all-time heat record on Sunday and was not expected to cool off until Tuesday.

Portland, known for rainy weather and sparse sunshine, was especially ill-prepared to handle the high temperatures. Stores sold out of air conditioning units and ice was hard to find.

Bars and restaurants closed because kitchen vents could not keep up with the rising temperatures, creating dangerous conditions for cooks.

Multnomah County, which includes Portland, has opened 11 emergency “cooling shelters,” most of them in public libraries, where residents without air conditioning could escape the sweltering heat.

Oregon Governor Kate Brown, a Democrat, eased COVID-19 restrictions for theaters, swimming pools and shopping malls and residents flocked to public pools and even fountains to cool off.

In Seattle, Washington state’s largest city, the mercury climbed on Sunday to an all-time high of 104 degrees F, surpassing a 2009 record of 103 degrees.

The state capital of Olympia likewise set a new benchmark high of 105 degrees, exceeding its 2009 record by 1 degree, according to the Weather Service.

The heat wave was expected to ease somewhat west of the Cascade range by Tuesday but persist through the week to the east of those mountains, it added.

Experts say extreme weather events such as the heatwaves that have descended on parts of the United States this year cannot be linked directly to climate change.