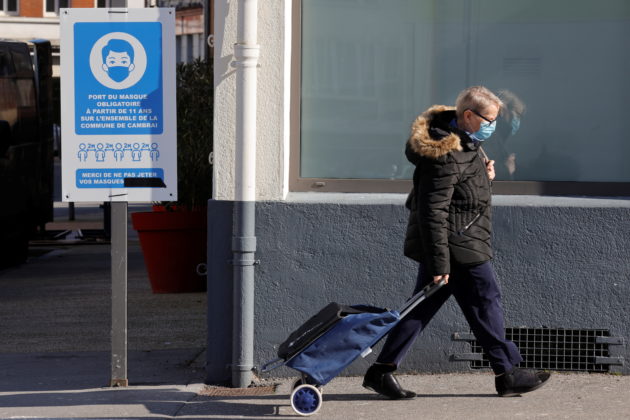 A woman, wearing a protective face mask, walks with her shopping trolley in a street in Cambrai before new lockdowns imposed during a month-long on Paris and parts of the north after a faltering vaccine rollout and spread of highly contagious coronavirus disease (COVID-19) variants in France, March 19, 2021. REUTERS/Pascal Rossignol

By Yiming Woo and Elizabeth Pineau

PARIS (Reuters) – Camila Campodonico was at work in Paris on Thursday evening when the government announced the city was entering a new lockdown to combat COVID-19, and she knew her plans for a get-together with friends this weekend were over.

“I heard that and I said: ‘Oh no, not again. A lockdown.’ I wasn’t very happy,” said Campodonico, a student from Argentina who is working temporarily for a marketing company.

With intensive care units close to overflowing, French Prime Minister Jean Castex announced that Paris residents could only leave home for essential trips or exercise, and non-essential travel to other parts of the country was banned.

Large numbers of Paris residents headed to railway stations on Friday morning so they could get out of the city before the restrictions, due to last for a month, come into force at midnight.

At the Gare de l’Est station in Paris, there were long lines of people at the ticket office. People, some with pets, rushed to board trains heading for Strasbourg and Luxembourg.

Valentino Armilli, 27, was going to visit his parents in Thionville, in the Lorraine region in eastern France, for the weekend. He took the decision to go there on Thursday night, because of the new lockdown.

“My parents had COVID a month ago and I have not seen them since. This weekend is the last time for a long while that I’ll be able to see them,” he said.

At the Montparnasse train station, Anna Henry, a 21-year-old student, said she had decided to go to her parents’ place in Brittany, western France, describing the latest Paris lockdown as “a bit too much”.

Anthony Massat, 23, also a student, was catching a train to Toulouse in south-western France: “There’s no lockdown in the south, so it will be a bit more free.”