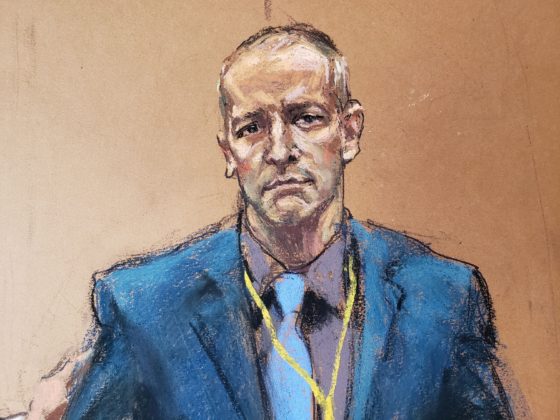 FILE PHOTO: Derek Chauvin, the former Minneapolis police officer facing murder charges in the death of George Floyd, is introduced to potential jurors during jury selection in his trial in Minneapolis, Minnesota, U.S., March 15, 2021 in this courtroom sketch from a video feed of the proceedings. REUTERS/Jane Rosenberg/

(Reuters) – The judge in the murder trial of Derek Chauvin, the former Minneapolis police officer charged in the death of George Floyd, denied Chauvin’s request to delay or move his trial out of the county on Friday morning.

Chauvin’s lead lawyer, Eric Nelson, has complained to the court that publicity around the trial has tainted the jury pool in and around Minneapolis, not least the city’s announcement last week it would pay Floyd’s relatives $27 million to settle their wrongful-death lawsuit.

Hennepin County District Judge Peter Cahill ruled against Chauvin from the bench on Friday, saying that delaying or moving the trial would make it no easier to seat an impartial jury.

“I don’t think there’s any place in the state of Minnesota that has not been subjected to extreme amounts of publicity in this case,” Cahill said.