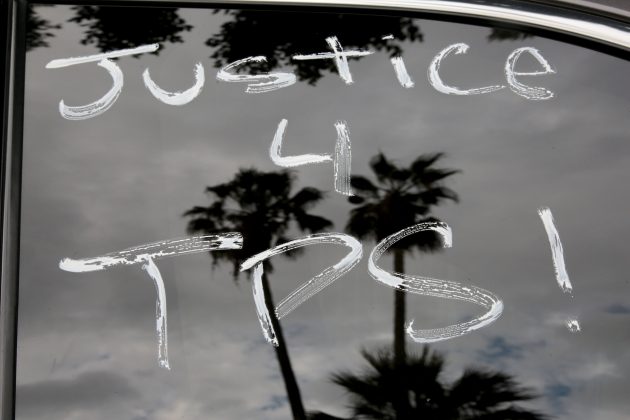 Paint is seen on cars before members of the Teamsters Union participate in a tractor trailer caravan surrounding the LA Metro Detention Center in support of port truck drivers and others threatened by deportation if the courts or congress don't stop the termination of Temporary Protected Status (TPS) in Los Angeles, California, U.S. October 3, 2018. REUTERS/Kyle Grillot

WASHINGTON (Reuters) – A U.S. federal judge in California barred the Trump administration on Wednesday from implementing a plan to end temporary protections for more than 300,000 immigrants in the United States from El Salvador, Haiti, Nicaragua, and Sudan.

U.S. District Judge Edward M. Chen issued a preliminary injunction in a suit brought by a number of immigrants with temporary protected status, or TPS.

The TPS designation offers protection from deportation to immigrants already in the United States, including those who entered illegally, from countries affected by natural disasters, civil conflicts, and other problems.

The government has failed to establish any real harm if “the status quo (which has been in existence for as long as two decades) is maintained during the pendency of this litigation,” Chen wrote in the order.

“Indeed, if anything, Plaintiffs and amici have established without dispute that local and national economies will be hurt if hundreds of thousands of TPS beneficiaries are uprooted and removed,” he said.

The Trump administration has shown a deep skepticism toward the temporary protected status program and has moved to revoke the special status afforded to thousands of immigrants from a number of countries, including the four named in the suit.