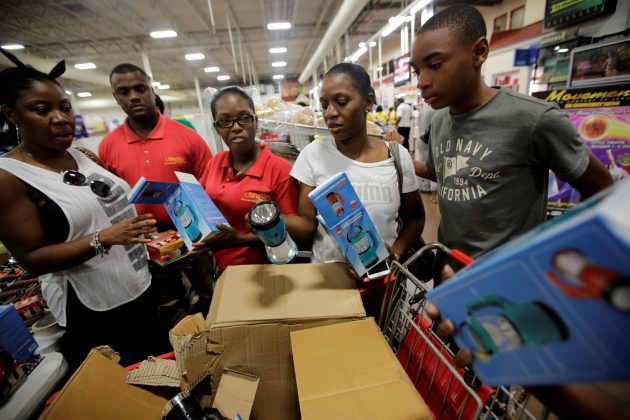 A saleswoman shows lamps to a customers while other people flock to the supermarket to take care of last minute shopping as Hurricane Matthew approaches in Kingston, Jamaica. REUTERS/Henry Romero

LES CAYES, Haiti (Reuters) – The fiercest Caribbean storm in almost a decade ripped into Haiti’s southwestern peninsula early on Tuesday with 145 mile-per-hour (230 kph) winds and storm surges that killed at least one person and damaged homes.

The eye of the violent Category 4 storm made landfall near Les Anglais on the western tip of Haiti at 7 a.m EDT, the U.S. National Hurricane Center said, pounding coastal villages with strong gusts.

One man died when a wave crashed through his home in the beach town of Port Salut, Haiti’s civil protection service said. He had been too sick to leave for a shelter, officials said. A fisherman also was missing, they said.

About 3 feet (1 meter) of rain is forecast to fall over denuded hills prone to flash floods and mudslides, threatening villages as well as shanty towns in the capital Port-au-Prince, where heavy rain fell overnight.

Life-threatening flash floods and mudslides were likely in southern and northwestern Haiti, the hurricane center said. It expected Matthew to remain a powerful hurricane through at least Wednesday night.

The outer bands of the cyclone already had reached the area late on Monday, flooding dozens of houses in Les Anglais when the ocean rose, the mayor said. In the town of Les Cayes on the southern coast, the wind bent trees and the power went out. 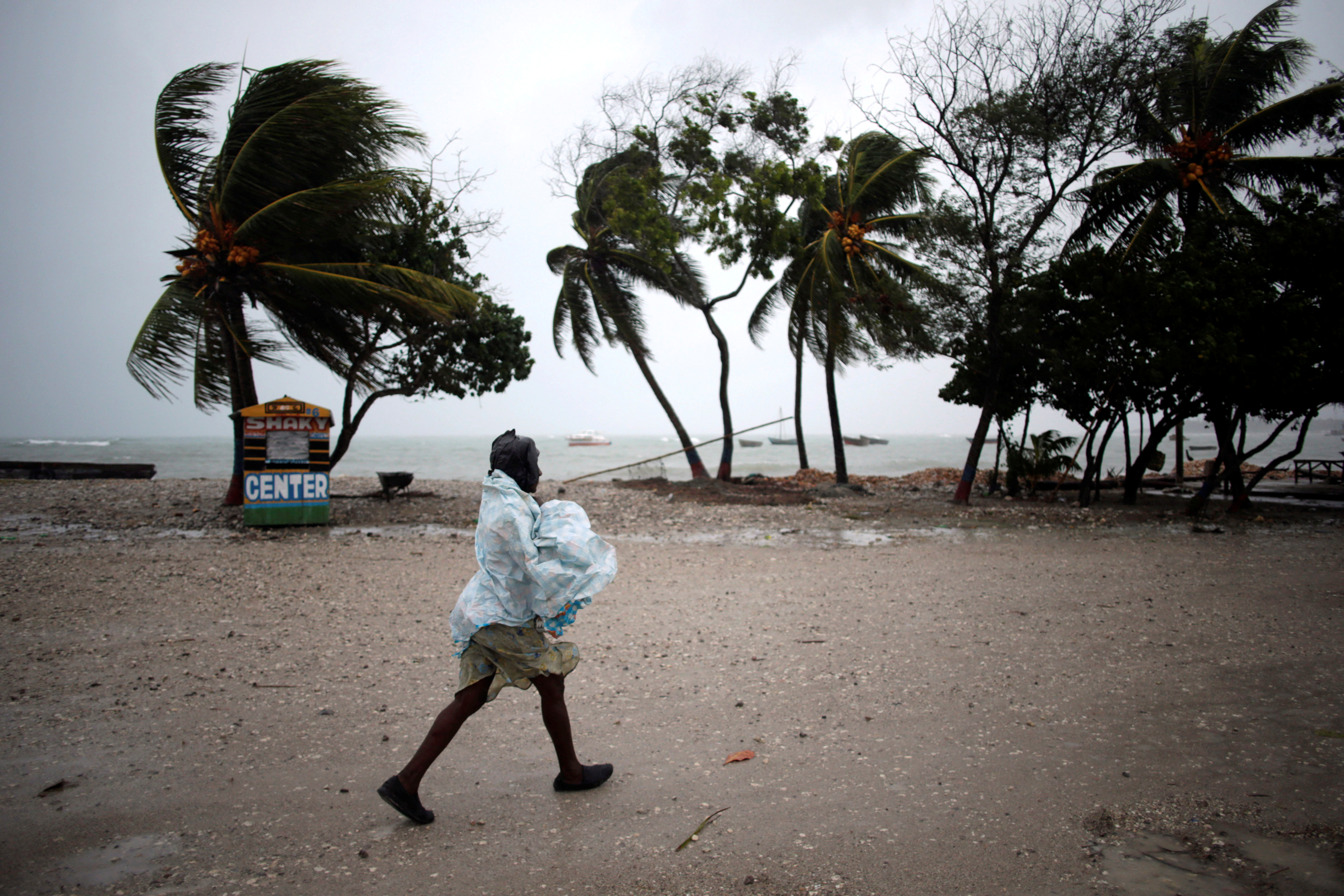 “We have gusts of wind hitting the whole area and the people have fled to a shelter,” Les Anglais mayor Jean-Claude Despierre said.

In the nearby town of Tiburon, the mayor said people who had been reluctant to leave their homes also ran for cover when the sea rose.

“Everyone is trying to find a safe place to protect themselves, the situation is very difficult,” Mayor Remiza Denize said, describing large waves hitting the town.

Poor Haitians are often reluctant to leave home in the face of storms, fearing their few belongings will be stolen.

Civil protection authorities said 130 children were evacuated by bus to a high school in the capital from an orphanage in the shoreside Cite Soleil slum, made up of tin shacks and open sewers and known as Haiti’s largest shanty town.

On the northern coast, about 300 detainees were transferred from a prison near the sea in the town of Jeremie, the Interior Ministry said.

The cyclone comes at a bad time for Haiti, where tens of thousands of people still live in tents after a 2010 earthquake that killed upwards of 200,000 people.

Cholera introduced by U.N. peacekeepers is expected to rise in the October rainy season, and the country was due to hold a long-delayed presidential election on Oct. 9.

The office of Interim President Jocelerme Privert said there was no change to the election date.

Crawling north at about 9 miles-per-hour (15 kph), the strongest storm since Hurricane Felix in 2009 threatens to linger long enough for its winds and rain to cause great damage in Haiti, where it will spend much of the day before hitting Cuba and the Bahamas later on Tuesday.

It will possibly reach Florida by Thursday as a major hurricane, although weaker than at present, the hurricane center said. Governor Rick Scott declared a state of emergency for Florida on Monday, designating resources for evacuations and shelters and putting the National Guard on standby.

In Les Cayes about 150 people huddled without electricity or food in the town’s largest shelter, a school.

“Since yesterday we’ve had nothing … We must sleep on the floor … Everyone is hungry,” said Erick Cange, 69 years old, a resident of the La Savanne neighborhood surrounding the school.

The conditions in the shelter compared unfavorably with Haiti’s neighbor Cuba, where authorities spent days organizing teams of volunteers to move residents to safety and secure property.

The storm is expected to make a direct hit later on Tuesday in the province of Guantanamo, the disputed home to a U.S. Naval base and military prison but also a small Cuban city. The U.S. Navy ordered the evacuation of 700 spouses and children of service personnel as the storm approached.

Guantanamo’s mountainous terrain is the country’s second coffee producer after nearby Santiago, and the storm poses a major threat to the current harvest.

The U.S. Agency for International Development said on Monday it was providing a combined $400,000 in aid to Haiti and Jamaica. The agency said in a statement it had pre-positioned relief supplies and was preparing to ship in additional supplies to the central Caribbean.