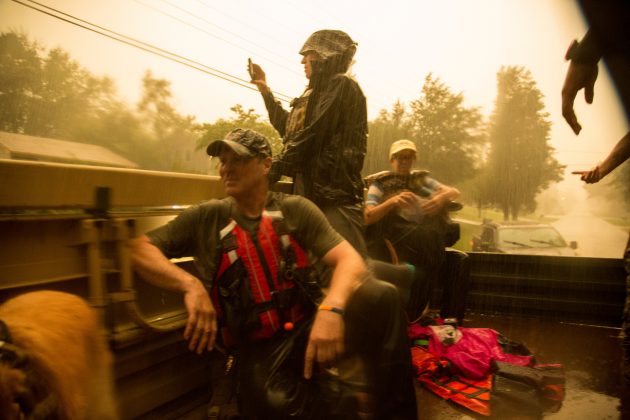 KINSTON, N.C. (Reuters) – Flooding from rain-swollen rivers was expected to worsen across the Carolinas on Thursday and the next couple of days in the aftermath of Hurricane Florence, which killed 36 people in three states, forecasters said.

Twenty flood gauges showed some level of flooding in North Carolina, South Carolina and Virginia, where some major waterways, well above their flood stages, were expected to rise through the weekend before they crest, the National Weather Service said.

“People in flood prone areas or near waterways need to remain alert as rivers crest and stay above their banks in coming days,” North Carolina Governor Roy Cooper said in a written statement. “Stay alert and stay safe.”

“Now it looks nice but it’s really the calm before the storm,” he said.

Florence dumped up to 36 inches (91 cm) of rain on parts of North Carolina and many areas remained cut off by floodwaters and inundated roads. The slow-moving storm made landfall on Friday as a Category 1 hurricane.

In Lenoir County, North Carolina, where the rising Neuse River has flooded some roads, emergency medical workers have been running a “mobile disaster hospital,” which provides urgent care to residents cut off from the nearest hospital.

Tripp Winslow, medical director of North Carolina Emergency Medical Services, helped set up the mobile emergency room during a downpour on Saturday night. They have received 20 to 30 patients a day so far, he said, but expect to be busier as the river crests.

“Once we get isolated we expect to see more,” he said. “No pun intended, it’s a fluid situation.” 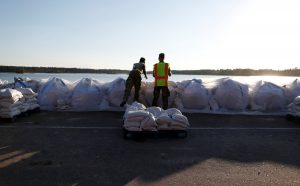 Members of the National Guard work on a long sand bag flood barrier being built by the South Carolina Department of Transportation on U.S. 501 to lesson damage to roads anticipated from floods caused by Hurricane Florence, now downgraded to a tropical depression, in Conway, South Carolina, U.S. September 19, 2018. REUTERS/Randall Hill

MANY STILL WITHOUT POWER

At least 36 deaths have been attributed to the storm, including 27 in North Carolina, eight in South Carolina and one in Virginia.

Some 2,600 people had been rescued by boat or helicopter in North Carolina alone since the storm made landfall, and about 10,000 people remain in shelters, according to state officials.

More than 121,000 customers were without power across North Carolina, and more than 2.1 million customers across the southeast United States were affected by the storm, according to utilities.

Duke Energy Corp started to return its Brunswick nuclear power plant in North Carolina to service on Thursday. The company shut both reactors at the 1,870-megawatt facility before Florence hit the coast near the plant in Southport, about 30 miles (48 km) south of Wilmington.

As floodwaters continue to rise, concerns are growing about the environmental and health dangers lurking in the water.

The flooding has caused 21 hog “lagoons,” which store manure from pig farms, to overflow, creating a risk that standing water will be contaminated, according to the state’s Department of Environmental Quality. North Carolina is one of the leading hog-producing states in the country.

Several sewer systems in the region also have released untreated or partly treated sewage and storm water into waterways over the last week, local media reported.

Experts have said that climate change has increased the likelihood of more massive, sluggish storms like Florence, capable of dropping record amounts of rain and touching off catastrophic flooding.