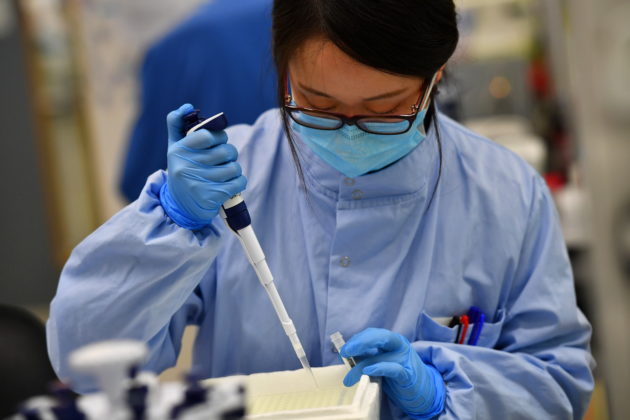 Scientists work at a laboratory where they sequence the novel coronavirus genomes at COVID-19 Genomics UK, on the Wellcome Sanger Institute's 55-acre campus south of Cambridge, Britain March 12, 2021. REUTERS/Dylan Martinez

CAMBRIDGE, England (Reuters) – Regular booster vaccines against the novel coronavirus will be needed because of mutations that make it more transmissible and better able to evade human immunity, the head of Britain’s effort to sequence the virus’s genomes told Reuters.

The novel coronavirus, which has killed 2.65 million people globally since it emerged in China in late 2019, mutates around once every two weeks, slower than influenza or HIV, but enough to require tweaks to vaccines.

Sharon Peacock, who heads COVID-19 Genomics UK (COG-UK) which has sequenced nearly half of all the novel coronavirus genomes so far mapped globally, said international cooperation was needed in the “cat and mouse” battle with the virus.

“We have to appreciate that we were always going to have to have booster doses; immunity to coronavirus doesn’t last forever,” Peacock told Reuters at the non-profit Wellcome Sanger Institute’s 55-acre campus outside Cambridge.

“We already are tweaking the vaccines to deal with what the virus is doing in terms of evolution – so there are variants arising that have a combination of increased transmissibility and an ability to partially evade our immune response,” she said.

Peacock said she was confident regular booster shots – such as for influenza – would be needed to deal with future variants but that the speed of vaccine innovation meant those shots could be developed at pace and rolled out to the population.

COG-UK was set up by Peacock, a professor at Cambridge, exactly a year ago with the help of the British’s government’s chief scientific adviser, Patrick Vallance, as the virus spread across the globe to Britain.

The consortium of public health and academic institutions is now the world’s deepest pool of knowledge about the virus’s genetics: At sites across Britain, it has sequenced 349,205 genomes of the virus out of a global effort of around 778,000 genomes.

On the intellectual frontline at the Wellcome Sanger Institute, hundreds of scientists – many with PhDs, many working on a voluntary basis and some listening to heavy metal or electronic beats – work seven days a week to map the virus’s growing family tree for patterns of concern.

Wellcome Sanger Institute has sequenced over half of the UK total sequenced genomes of the virus after processing 19 million samples from PCR tests in a year. COG-UK is sequencing around 30,000 genomes per week – more than the UK used to do in a year.

Three main coronavirus variants – which were first identified in Britain (known as B.1.1.7), Brazil (known as P1) and South Africa (known as B.1.351) – are under particular scrutiny.

Peacock said she was most worried about B.1.351.

“It is more transmissible, but it also has a change in a gene mutation, which we refer to as E484K, which is associated with reduced immunity – so our immunity is reduced against that virus,” Peacock said.

With 120 million cases of COVID-19 around the world, it is getting hard to keep track of all the alphabet soup of variants, so Peacock’s teams are thinking in terms of “constellations of mutations”.

“So a constellation of mutations would be like a leaderboard if you like – which mutations in the genome that we’re particularly concerned about, the E484K is must be one of the top of the leaderboard,” she said.

“So we’re developing our thinking around that leaderboard to think, regardless of the background and lineage, about what mutations or constellation of mutations are going to be important biologically and different combinations that may have slightly different biological effects.”

Peacock, though, warned of humility in the face of a virus that has brought so much death and economic destruction.

“One of the things that the virus has taught me is that I can be wrong quite regularly – I have to be quite humble in the face of a virus that we know very little about still,” she said.

“There may be a variant out there that we haven’t even discovered yet.”

There will, though, be future pandemics.

“I think its inevitable that we will have another virus emerge that is of concern. What I hope is that having learned what we have in this global pandemic, that we will be better prepared to detect it and contain it.”