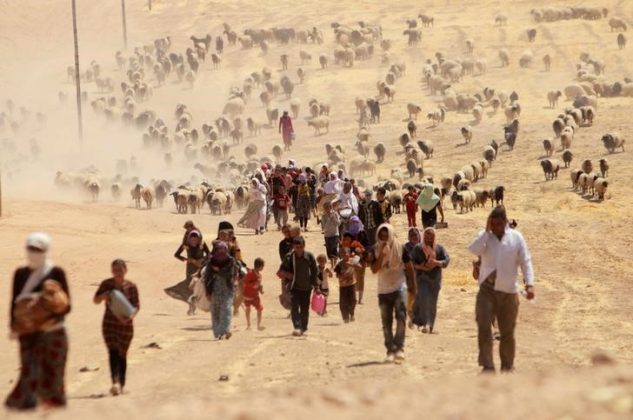 Displaced people from the minority Yazidi sect, fleeing violence from forces loyal to the Islamic State in Sinjar town, walk towards the Syrian border, on the outskirts of Sinjar mountain, near the Syrian border town of Elierbeh of Al-Hasakah Governorate August 10, 2014. REUTERS/Rodi Said/File Photo

BAGHDAD (Reuters) – Thousands of Yazidis are being held captive by Islamic State in Syria where many are used for sexual slavery or forced to fight for the group, the United Nations said on Wednesday, on the second anniversary of what investigators termed a genocide.

A U.N.-appointed commission of independent war crimes investigators said in June that Islamic State was committing genocide against the Yazidis, a religious community of 400,000 people in northern Iraq, beginning with an attack on their city of Sinjar on Aug. 3, 2014.

The U.N. said most of the captives have been taken to neighboring Syria “where Yazidi women and girls continue to be sexually enslaved and Yazidi boys indoctrinated, trained and used in hostilities.”

Around 3,200 Yazidi women and girls are being held captive, and thousands of men and boys are missing, the U.N. said.

The designation of genocide, rare under international law, would mark the first recognized genocide carried out by non-state actors, rather than a state or paramilitaries acting on its behalf.

Historical victims of genocide include Armenians in 1915, Jews during the Nazi Holocaust, Tutsis in Rwanda in 1994 and Bosnian Muslims in Srebrenica in 1995.