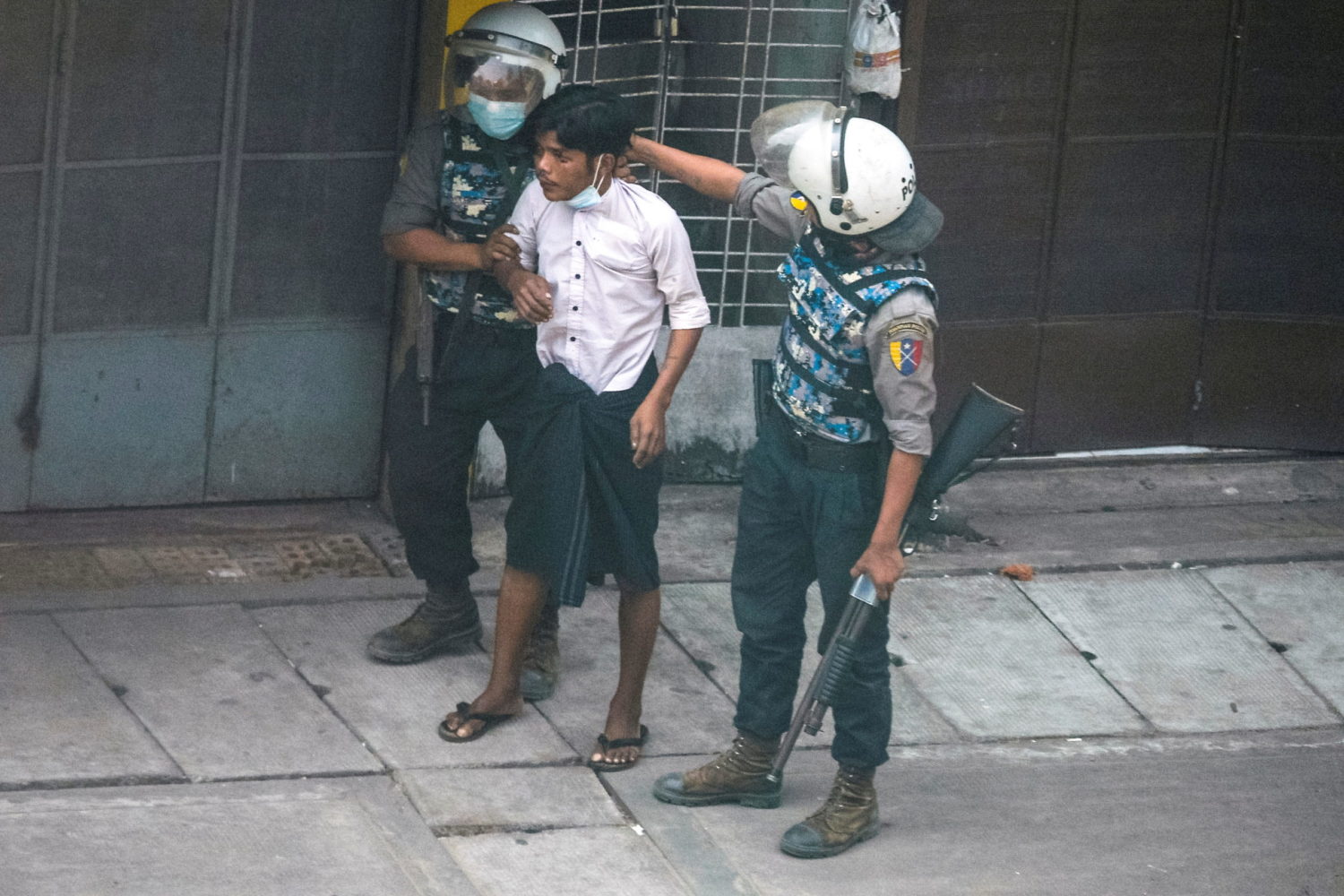 (Reuters) – Security forces killed at least nine opponents of Myanmar’s Feb. 1 coup on Friday, a funeral service and media said, as Indonesia urged an end to violence and Western ambassadors condemned what they called the military’s immoral, indefensible actions.

Police and soldiers have used increasingly violent tactics to suppress demonstrations by supporters of detained elected leader Aung San Suu Kyi, but that has not deterred the protesters and crowds turned out again on Friday.

Security forces opened fire in a confrontation in the central town of Aungban as they tried to clear a protesters’ barricade, media and a witness reported.

“Security forces came to remove barriers but the people resisted and they fired,” the witness, who declined to be identified, said by telephone.

An official with Aungban’s funerary service, who declined to be identified, told Reuters eight people were killed, seven on the spot and one wounded person who died after being taken to hospital in the nearby town of Kalaw.

The spokesman for the junta was not immediately available for comment but has previously said security forces have used force only when necessary. Critics have derided that.

One protester was killed in the northeastern town of Loikaw, the Myanmar Now news portal said. One person was shot and killed in the main city of Yangon, social media posts showed. Reuters could not confirm that death.

Police ordered people in some Yangon neighborhoods to dismantle barricades and have been hunting for protest leaders, residents said. Video on social media showed police forcing a man to crawl down on a street on all fours.

Demonstrators were also out in the second city of Mandalay, the central towns of Myingyan and Katha, and Myawaddy in the east, witnesses and media reported.

Ambassadors of Western countries condemned the violence as “immoral and indefensible”, in particular in Yangon’s Hlaing Tharyar industrial district, where dozens were killed over several days after Chinese-owned garment factories were torched last weekend.

“Internet blackouts and suppression of the media will not hide the military’s abhorrent actions,” they said in a statement.

The total number of people killed in weeks of unrest has risen to at least 234, based on a tally by the Assistance Association for Political Prisoners activist group.

Myanmar’s Asian neighbors, led by Indonesia, have offered to help find a solution but failed to make headway.

The 10 countries of the Association of Southeast Asian Nations (ASEAN) has long held to the principle of not commenting on each other’s internal affairs, but there are growing signs that the Myanmar crisis is forcing a reassessment of that.

Indonesian President Joko Widodo made some of the strongest comments yet from a regional leader on the crackdown.

“Indonesia urges that the use of violence in Myanmar be stopped immediately so that there are no more victims,” Jokowi, as he is known, said in a virtual address.

“The safety and welfare of the people must be the top priority. Indonesia also urges dialogue, that reconciliation is carried out immediately to restore democracy.”

At the meeting, the head of Indonesia’s armed forces, Hadi Tjahjanto, expressed concern over the Myanmar situation, the Indonesian military said on its website.

Authorities have tightened restricted on internet services, making information increasingly difficult to verify, and also clamped down on private media.

The U.N. human rights office said this week about 37 journalists had been arrested so far. Two more were detained in the capital, Naypyitaw, on Friday while covering a hearing for an arrested member of Suu Kyi’s party, said the Mizzima news portal, the former employer of one of them, Than Htike Aung.

The other detained reporter was Aung Thura of the British Broadcasting Corp (BBC). The BBC said they were taken away by unidentified men and it called on authorities to help find its accredited journalist and confirm he was safe.

Suu Kyi, 75, faces accusations of bribery and other crimes that could see her banned from politics and jailed if convicted. Her lawyer says the charges are trumped up.

The army has defended its takeover, saying its accusations of fraud in a Nov. 8 election swept by Suu Kyi’s party were ignored by the electoral commission. It has promised a new election but not set a date.