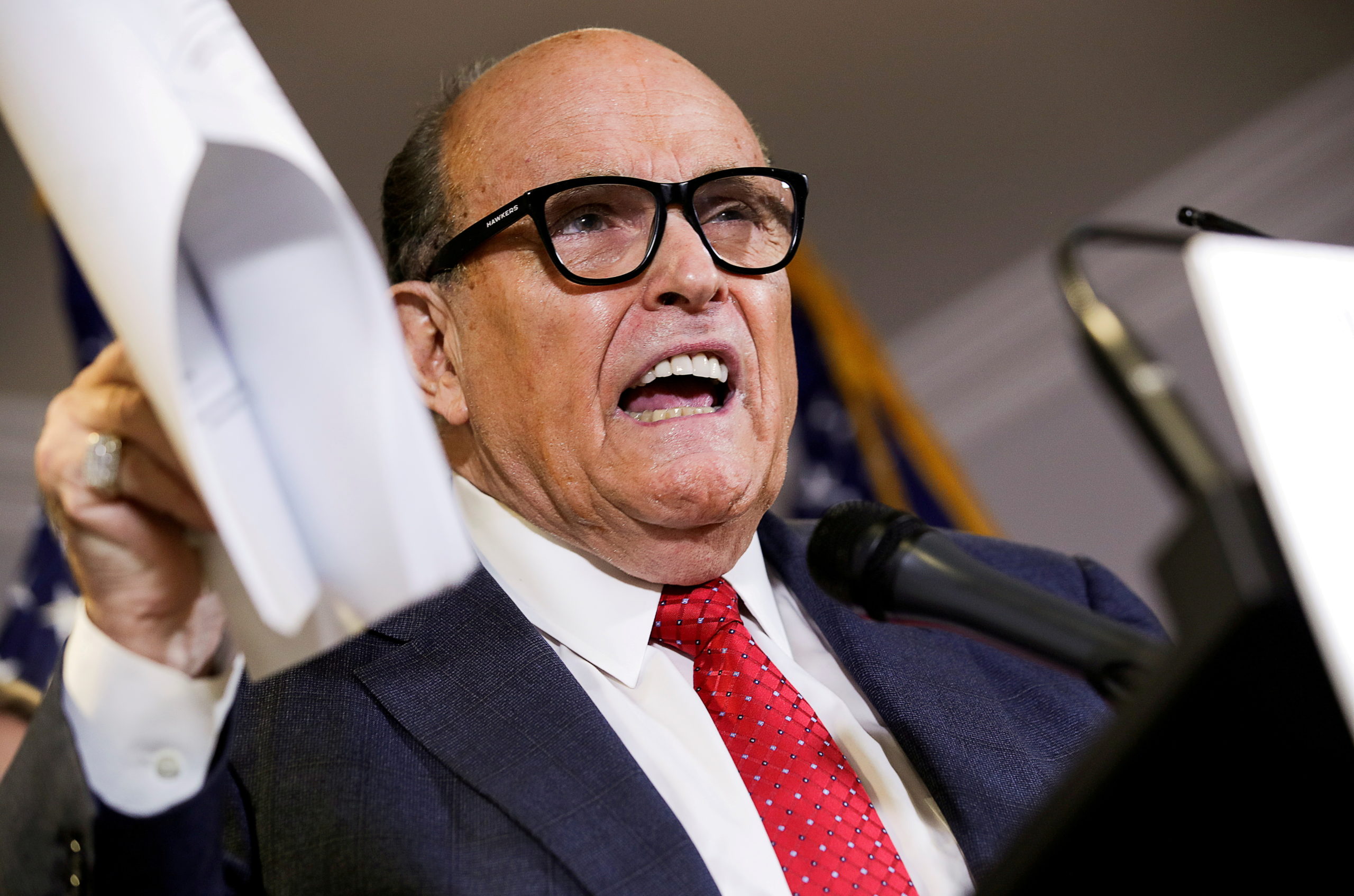 NEW YORK (Reuters) -Rudy Giuliani’s New York law license was suspended on Thursday, after a state appeals court found he had lied in arguing that the 2020 presidential election was stolen from his client, former U.S. President Donald Trump.

Citing the Jan. 6 riot at the U.S. Capitol, the Appellate Division said Giuliani’s eagerness to trumpet false claims “immediately threatens the public interest” and could erode public confidence in the election process, a hallmark of American democracy, as well as the legal profession.

“This country is being torn apart by continued attacks on the legitimacy of the 2020 election and of our current president, Joseph R. Biden,” the court said.

“Where, as here, the false statements are being made by (Giuliani), acting with the authority of being an attorney, and using his large megaphone, the harm is magnified.”

Speaking to reporters outside his home on Manhattan’s Upper East Side, a combative Giuliani called the suspension “a one-sided decision not based on evidence.”

The Republican also blamed Democrats for his growing legal troubles, including over his dealings in Ukraine, and he said dozens of witnesses could back up his election fraud claims.

“I fight back. That’s what I do,” Giuliani said. “I go to court and I prove what I’m telling you in court. There are appellate courts. This isn’t yet a dictatorship.”

In a statement, Trump expressed disbelief that Giuliani could lose his law license for “fighting what has already been proven to be a Fraudulent Election.”

The appeals court said Giuliani’s temporary suspension could become permanent after a hearing by the attorney grievance committee that recommended it.

John Leventhal and Barry Kamins, two lawyers for Giuliani, said they were disappointed with the suspension but believed that after a hearing he would be reinstated as “a valued member of the legal profession that he has served so well.”

Giuliani’s other legal problems include a $1.3 billion lawsuit where Dominion Voting Systems accused him of defamation for claiming its machines helped flip votes to Biden from Trump.

Federal prosecutors in Manhattan are separately examining Giuliani’s dealings in Ukraine, including whether he violated lobbying laws while working as Trump’s lawyer.

Eighteen devices, including cellphones and computers were seized in April 28 raids of Giuliani’s home and office for the Ukraine probe. Giuliani has denied wrongdoing.

The appeals court said Giuliani made numerous false statements about voting in Arizona, Georgia and Pennsylvania, including over the counting of absentee ballots.

It highlighted a Pennsylvania court hearing on Nov. 17 where Giuliani alleged widespread voter fraud, though his formal written complaint on Trump’s behalf made no mention of it.

The court also criticized Giuliani’s unsubstantiated claims of voting by dead people, including the boxing heavyweight champion Joe Frazier, who died in 2011.

“There is evidence of continuing misconduct, the underlying offense is incredibly serious, and the uncontroverted misconduct in itself will likely result in substantial permanent sanctions,” the court said.

Though the court rejected Giuliani’s claim that the grievance committee violated his free speech rights, the suspension does not muzzle his ability to speak publicly.

That contrasts with Twitter’s permanent ban and Facebook’s two-year suspension of Trump from their respective platforms.

Giuliani received his law license in 1969, and as New York City mayor won wide praise for his response to the Sept. 11, 2001, attacks.