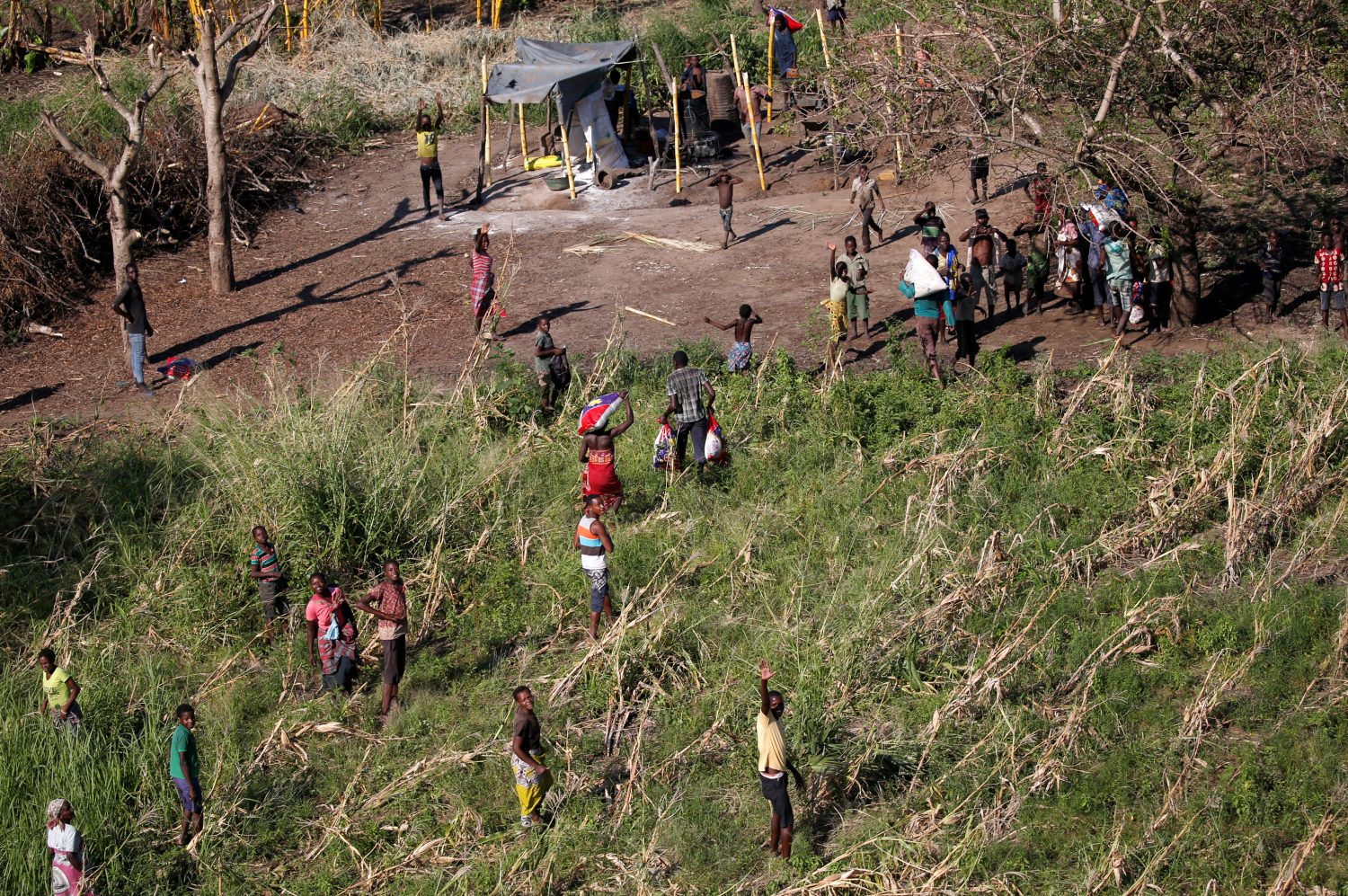 By Emma Rumney and Stephen Eisenhammer

BEIRA, Mozambique (Reuters) – Dozens of fragile patients poured into a clinic in the wrecked Mozambican port city of Beira on Wednesday, as the government said it had confirmed the first five cases of cholera in the wake of deadly Cyclone Idai. 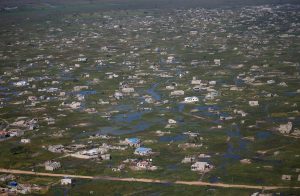 Thousands of people were trapped for more than a week in submerged villages without access to clean water after the cyclone smashed into Mozambique on March 14, causing catastrophic flooding. Relief efforts have increasingly focused on containing outbreaks of waterborne and infectious diseases.

In Munhava in central Beira, doctors and nurses at a newly set up treatment center said they are treating around 140 patients a day for diarrhea. Many of the patients arrive too weak to walk.

A Reuters reporter saw two men carrying an unconscious woman from a rickshaw into the clinic, trying to cover her naked body with a sheet.

Inside, those too ill to sit lay on concrete benches attached to intravenous drips. Mothers were perched on plastic chairs in the courtyard, trying to get their children to drink rehydration salts from green cups.

It was the second time she had been to the clinic this week, Salgado said. Her child’s diarrhea returned as soon as she got home, despite the chlorine solution nurses gave her to purify their water.

Cholera is endemic to Mozambique, which has had regular outbreaks over the past five years. About 2,000 people were infected in the last outbreak, which ended in February 2018, according to the World Health Organisation (WHO).

But the scale of the damage to Beira’s water and sanitation infrastructure coupled with its dense population have raised fears that an epidemic now would be difficult to put down. 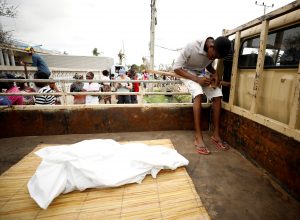 A relative writes the name of a one-year-old child who died at a health centre dealing with water borne diseases onto a a cross in Beira, Mozambique, March 27, 2019. REUTERS/Mike Hutchings

Ussene Isse, national director of medical assistance at the Health Ministry, said he expected cholera to spread beyond the five cases confirmed as of Wednesday morning.

“When you have one case, you have to expect more cases in the community,” he told reporters. Health workers are battling 2,700 cases of acute diarrhea, which could be a symptom of cholera, Isse added.

Such diseases are another threat in the aftermath of Idai, which tore through Mozambique and into neighboring Zimbabwe and Malawi, killing more than 700 people and displacing hundreds of thousands of others.

Cholera is spread by faeces in sewage-contaminated water or food, and outbreaks can develop quickly in a humanitarian crisis where sanitation systems are disrupted. It can kill within hours if left untreated.

Lin Lovue, 27, said he had rushed his son to the clinic late on Tuesday after a day of diarrhea. Within an hour of getting there, the child died.

“The biggest challenge is organization,” said a coordinator at the clinic who did not want to be named. “The health system was completely broken after the storm and we have to re-establish capacity fast.”

Medical charity Medecins Sans Frontieres (MSF), which runs the emergency center at Munhava, has set up two others in Beira and is providing consultations via mobile clinics in several neighborhoods.

Outside the clinic, two medics dressed in blue overalls lifted the body of a 1-year-old child wrapped in a white bag on to the back of an open-top truck. The father laid his child down on a bamboo mat as someone wrote the baby’s name on a wooden cross.

The WHO is sending 900,000 doses of oral cholera vaccine to affected areas from a global stockpile. The shipment is expected to arrive in Mozambique later this week.

For now families, like that of Nelson Vasco, are being given a chlorine solution to purify their water. Three of Vasco’s children were discharged on Wednesday after recovering from severe diarrhea.

Vasco and his wife and mother carried the frail children on their backs as they walked through the mud to reach their two-room house in Goto, a poor community in central Beira.

Their home lost its roof in the storm and although Vasco managed to salvage some of the metal sheeting, the rain still comes in. But the biggest danger right now is the water from the mains supply.

Like most in this community of mud-brick homes, the family do not have running water, instead buying it from a neighbor who does. But they now worry it has been contaminated.

The death toll in Mozambique from Cyclone Idai has risen to 468, Mozambican disaster management official Augusta Maita said. That takes the total number of deaths in Mozambique, Zimbabwe and Malawi to 707 people, with many more missing. 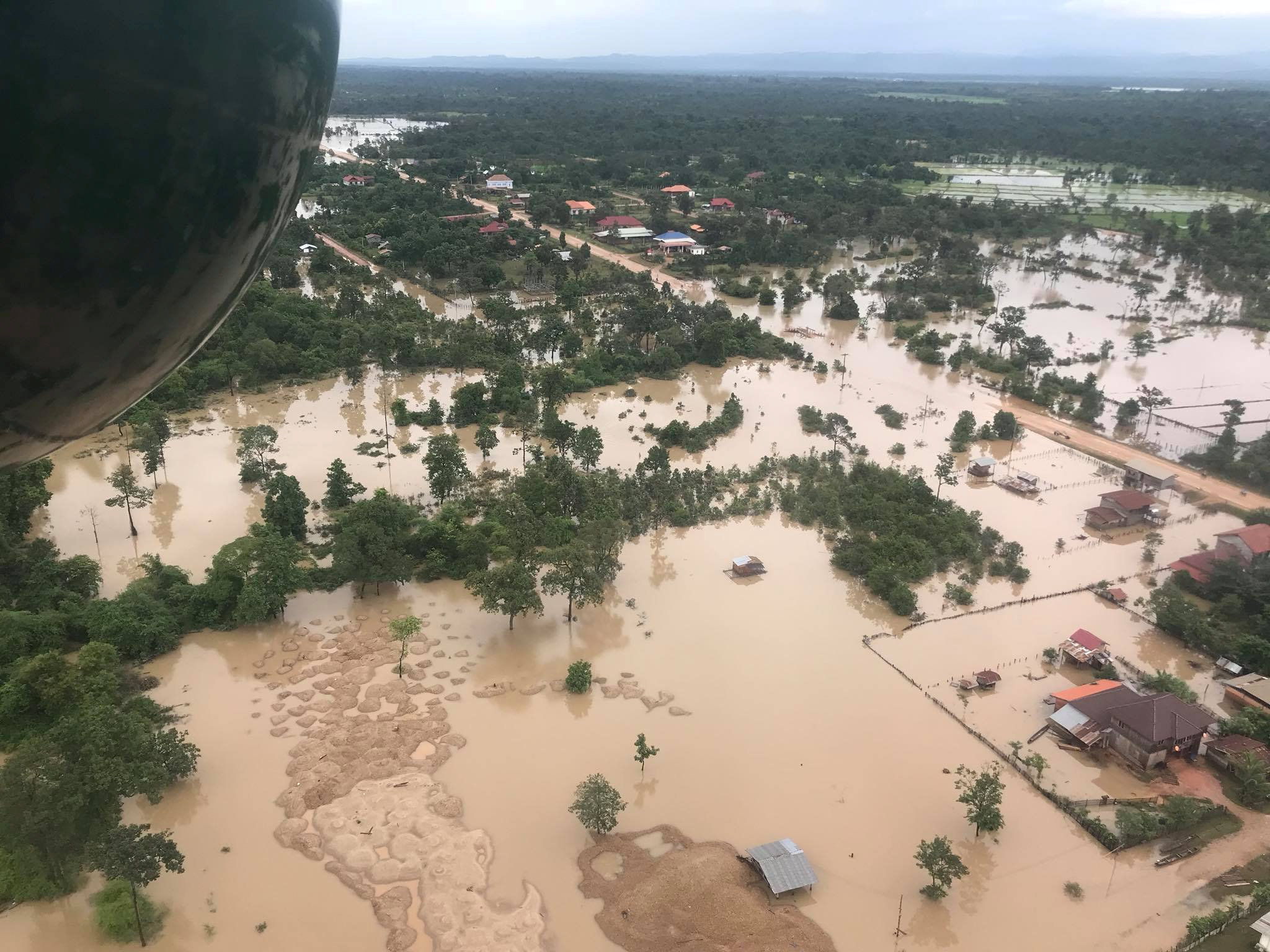 By James Pearson and Panu Wongcha-um

SEKONG, Laos (Reuters) – Rescue teams from China and Thailand headed on Wednesday into a remote part of landlocked Laos, where more than 3,000 people were stranded after a dam collapse sent a deluge of water across a swathe of villages, domestic media said.

The Vientiane Times, citing district Governor Bounhom Phommasane, said about 19 people had been “found dead”. While nearly 3,000 had been plucked to safety, more than that number were awaiting rescue, many on the rooftops of submerged homes.

A senior Lao government official told Reuters by telephone from the capital, Vientiane, that dozens were feared dead after the failure of the dam – a subsidiary structure under construction as part of a hydroelectric project – on Monday.

“We will continue with rescue efforts today, but it’s very difficult, the conditions are very difficult. Dozens of people are dead. It could be higher,” said the official, who declined to be identified as he was not authorized to speak to the media.

A United Nations report on the disaster put the death toll at five, with 34 missing, 1,494 evacuated and 11,777 people in 357 villages affected. It said 20 houses were destroyed and more than 223 houses and 14 bridges damaged by the flooding.

However, a government official said hundreds were reported missing after at least seven villages were submerged in the Attapeu province, the southernmost part of the country.

State media showed pictures of villagers, some with young children, stranded on roofs of submerged houses, and others trying to board wooden boats. 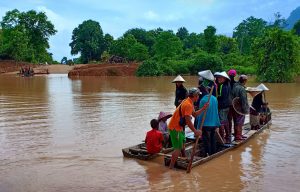 Experts said the remoteness of the affected area could hamper relief operations.

“The roads are very poor,” Ian Baird, a professor of geography at the University of Wisconsin-Madison and a Laos expert, told Reuters by telephone.

“People don’t usually go in that area during the rainy season. There are mountains nearby that villagers might be able to get up on … I don’t think anybody really knows for sure.”

State media said a joint team of Lao and Chinese rescuers would reach Attapeu on Wednesday afternoon, and it showed a long line of cars with boats on trailers heading into the country from northeast Thailand. South Korea and Singapore have also offered to help in the rescue effort.

Laos, one of the world’s few remaining communist states and one of Asia’s poorest countries, has ambitions to become the “battery of Asia” through the construction of multiple dams.

Its government depends almost entirely on outside developers to build the dams under commercial concessions that involve the export of electricity to more developed neighbors, including power-hungry Thailand.

Rights groups have repeatedly warned against the human and environmental cost of the dam drive, including damage to the already fragile ecosystem of the region’s rivers.

Attapeu is a largely agricultural province that borders Vietnam to the east and Cambodia to the south.

The dam that collapsed was part of the $1.2 billion Xe-Pian Xe-Namnoy power project, which involves Laotian, Thai and South Korean firms. Known as “Saddle Dam D”, it was part of a network of two main dams and five subsidiary dams. 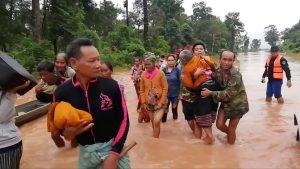 People walk through flooded area after being brought to safety by boat in Sanam Xay district, Attapeu Province, Laos after a hydropower dam under construction in Southern Laos collapsed, in this still picture taken from social media video obtained July 24, 2018. ATTAPEU TODAY/ via REUTERS

The project’s main partner, South Korea’s SK Engineering Construction, said part of a small supply dam was washed away and the company was cooperating with the Laos government to help rescue villagers.

The firm blamed the collapse on heavy rain.

Laos and its neighbors are in the middle of the monsoon season that brings tropical storms and heavy rain. Lao state media also posted images of flash flooding, with buildings and roads under water, further north in Khammouane province.

An official at SK Engineering Construction said fractures were discovered on the dam on Sunday and the company ordered the evacuation of 12 villages as soon the danger became clear.

Laos expert Baird said the collapse of the subsidiary dam was unlikely to affect others in the project.

“The water’s all out of the reservoir now and the water levels are already going down but I don’t think they’ll be able to fix it until the dry season,” he said.

Hydropower dams on the Mekong River’s lower mainstream pose a serious threat to the region, International Rivers, which works to stop destructive hydropower projects in Laos, said in April.

Predicted impacts include a decrease of 30 to 40 percent in fisheries by 2040 as well as a drastic cut in food security and farm productivity, as well as greater poverty in much of the Lower Mekong Basin.