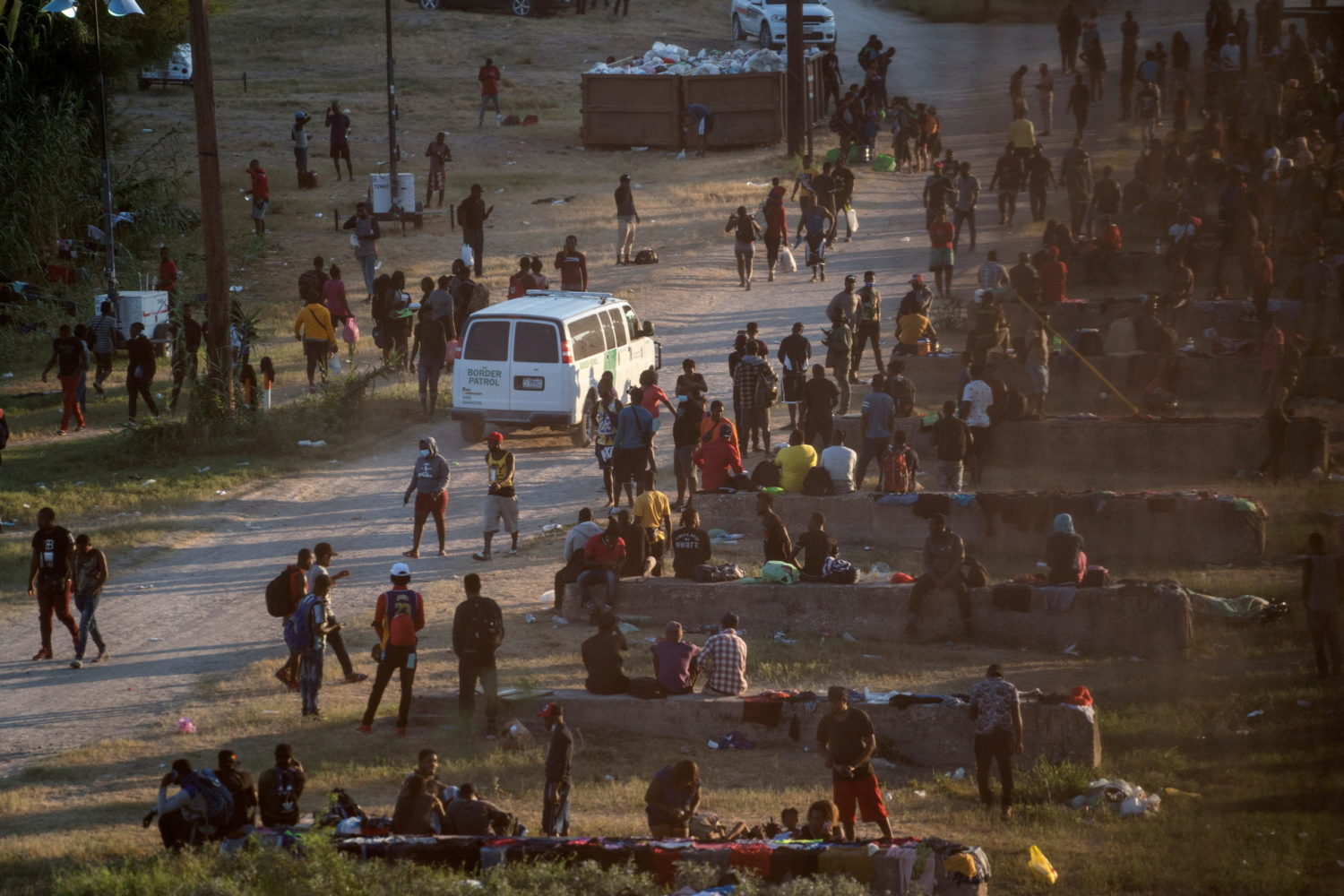 CIUDAD ACUÑA, Mexico (Reuters) – Haitians fleeing a country hammered by political turmoil and two natural disasters made up most of over 10,000 migrants sleeping on the ground and desperate for food in a squalid camp under a bridge in southern Texas on Friday, in a growing humanitarian and political challenge for U.S. President Joe Biden.

The Haitians were joined by Cubans, Venezuelans and Nicaraguans under the Del Rio International Bridge connecting Mexico to south Texas. They slept under light blankets. A few pitched small tents.

More migrants were expected after long and harrowing journeys through Mexico and Central and South America. Officials on both sides of the U.S.-Mexico border said most of the migrants were Haitians.

Several Haitians told Reuters they followed instructions shared on WhatsApp by other Haitians looking for a safe route to avoid being caught by Mexican authorities.

James Pierre, a 28-year-old Haitian interviewed in Del Rio, Texas, shared a WhatsApp list of 15 stops through Mexico – culminating in Ciudad Acuña, just across from Del Rio – that he said was circulating among migrants.

“Those ahead sent directions by phone. I helped people coming behind me,” Pierre said. Still, he said he got lost for days in the mountains and survived on little but water and fruit.

Haiti’s president was assassinated in July and that was in August battered by both a 7.2 magnitude earthquake and a powerful storm.

Del Rio Mayor Bruno Lozano said the number of migrants under the bridge that crosses into Mexico had jumped by around 2,000 during the day on Thursday, from 8,200 in the morning to 10,503 by the evening.

Most of the migrants at the camp appeared to be men, but women nursing or carrying kids also could be seen.

Reuters witnessed hundreds of migrants wading through the shallow Rio Grande River, which divides the two countries, back into Mexico to stock up on essentials they say they are not receiving on the American side.

Temperatures were forecast to stay above 100 degrees Fahrenheit (38 Celsius) in coming days.

The U.S. Border Patrol said in a statement on Thursday it was increasing staffing in Del Rio and providing drinking water, towels and portable toilets as migrants wait to be transported to U.S. facilities.

Biden, a Democrat who took office in January, pledged a more humane approach to immigration than that of former President Donald Trump, whose fellow Republicans seized on the camp as evidence Biden’s policies were drawing more migrants.

“When you have open borders, this is what happens. This is not humane, this is not compassionate,” said Republican Senator Ted Cruz from Texas in a video on Twitter recorded under the bridge on Thursday.

Republican Texas Governor Greg Abbott, whose administration has arrested migrants for trespassing and is planning to build its own wall on the border after Biden halted Trump’s signature project, said in a tweet on Thursday he would sign a law to increase border security funding in the state to $3 billion.

U.S. authorities arrested more than 195,000 migrants at the southwest border in August, according to government data released on Wednesday, a slight dip from the previous month but still around 20-year-highs.

While Biden rolled back many of Trump’s immigration actions early in his presidency, he left in place a sweeping pandemic-era expulsion policy that has allowed his administration to quickly turn around most migrants caught crossing the U.S.-Mexico border.

The policy issued by the U.S. Centers for Disease Control and Prevention has been criticized by pro-migrant groups and some Democrats as cutting off legal access to asylum. On Thursday, a U.S. federal judge the policy could no longer be applied to families.

The judge’s order takes effect in 14 days and the Biden administration may appeal.