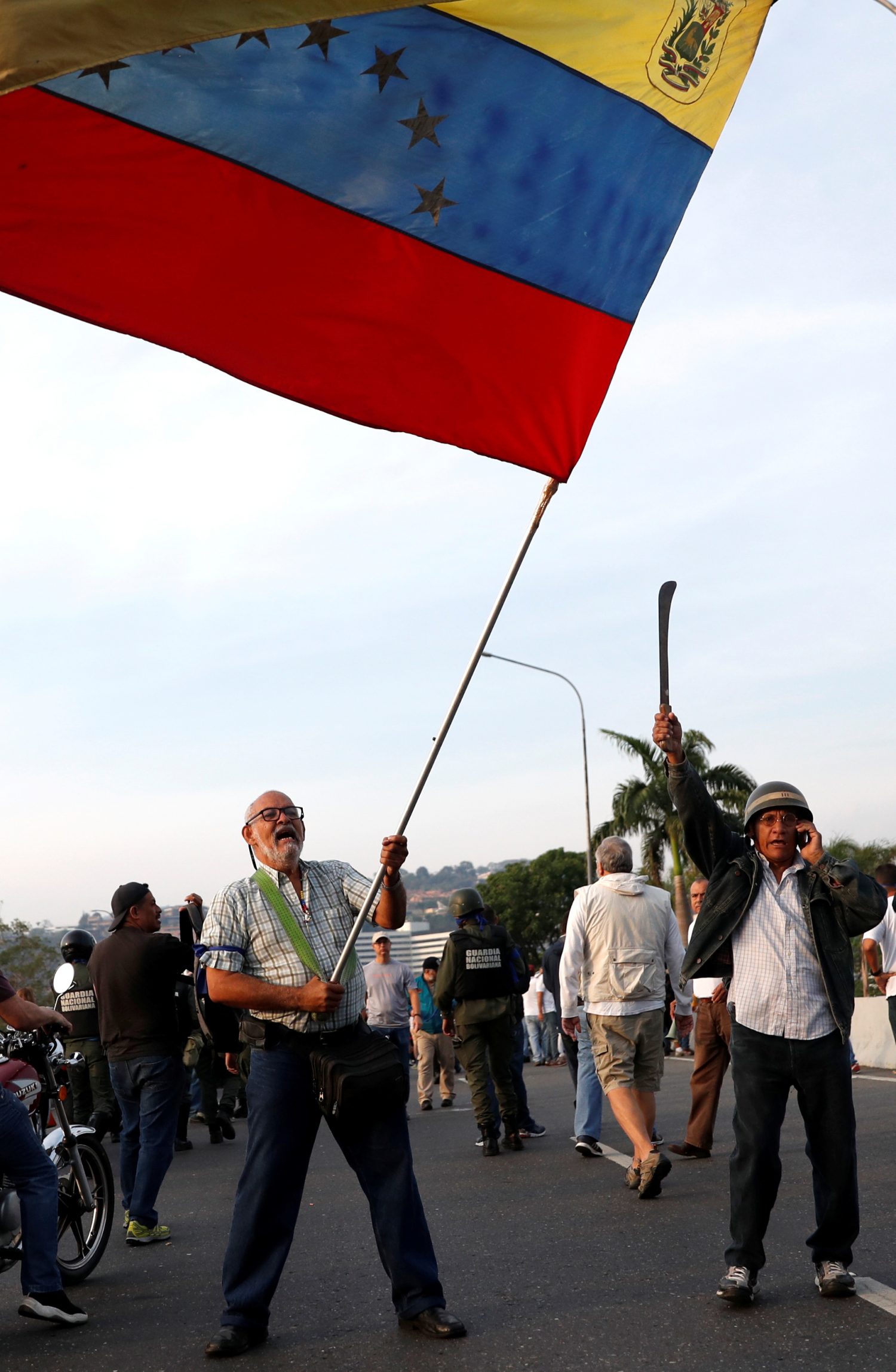 By Vivian Sequera and Angus Berwick

CARACAS (Reuters) – Venezuelan opposition leader Juan Guaido on Tuesday called for a military uprising to oust President Nicolas Maduro and armed factions exchanged gunfire outside a Caracas air base as the country hit a new crisis point after years of political and economic chaos.

Several dozen armed men in military uniform accompanying Guaido clashed with soldiers supporting Maduro at a protest outside the La Carlota air base, Reuters witnesses said, but the incident fizzled out and did not appear to be part of an immediate attempt by the opposition to take power by force.

Guaido, in a video posted on Twitter earlier on Tuesday, said he had begun the “final phase” of his campaign to topple Maduro, calling on Venezuelans and the military to back him.

Defense Minister Vladimir Padrino called the latest instability a “coup movement” but several hours after Guaido’s announcement there was no sign of any other military activity and there were no immediate reports of casualties. Guaido later left a rally he was holding with military supporters at the air base.

Maduro said he had spoken with military leaders and that they had shown him “their total loyalty.” “Nerves of steel!” Maduro wrote on Twitter. “I call for maximum popular mobilization to assure the victory of peace. We will win!”

The move was Guaido’s boldest effort yet to convince the military to rise up against Maduro. If it fails, it could be seen as evidence that he lacks the support he says he has. It might also encourage the authorities, which have already stripped him of parliamentary immunity and opened multiple investigations into him, to arrest him.

The United States is among some 50 countries that recognize Guaido as Venezuela’s president and has imposed sanctions to try to dislodge Maduro who they say won re-election last year through fraud.

Oil prices topped $73, partly driven higher by the uncertainty in Venezuela, an OPEC member whose oil exports have been hit by U.S. sanctions and an economic crisis.

A former U.S. official said that while it was unclear whether Guaido’s efforts would touch off a broader military uprising against Maduro, it appeared aimed at building momentum toward May Day Street protests planned for Wednesday and making them a turning point.

Guaido has said Wednesday’s protests will be “the largest march in Venezuela’s history” and part of what he calls the “definitive phase” of his effort to take office in order to call fresh elections.

Venezuela is mired in a deep economic crisis. Shortages of food and medicine have prompted more than three million Venezuelans to emigrate in recent years.

Guaido, the leader of Venezuela’s opposition-controlled National Assembly, in January invoked the constitution to assume an interim presidency, arguing that Maduro’s re-election in 2018 was illegitimate.

U.S. President Donald Trump “has been briefed and is monitoring the ongoing situation,” White House spokeswoman Sarah Sanders said on Tuesday. The White House declined comment on whether the administration had been consulted or had advance knowledge of what Guaido was planning.

U.S. national security adviser John Bolton appeared to back Guaido’s actions on Tuesday. “The FANB must protect the Constitution and the Venezuelan people. It should stand by the National Assembly and the legitimate institutions against the usurpation of democracy,” Bolton tweeted, referring to the FANB armed forces.

Conservative Republicans in Washington welcomed the reports from Venezuela. Senator Marco Rubio, a hardliner on Venezuela, urged Venezuelans to take to the streets: “Do not allow this moment to slip away. It may not come again,” he wrote on Twitter.

Venezuelan Information Minister Jorge Rodriguez on Tuesday tweeted that the government was confronting a small group of “military traitors” seeking to promote a coup.

Diosdado Cabello, head of the Constituent Assembly, a legislative body that acts in support of the government, said the opposition had not been able to take over the air base. He urged Maduro’s backers to rally at the presidential palace in Caracas to support him.

Guaido, in the video on his Twitter account, was accompanied by men in military uniform and opposition politician Leopoldo Lopez, who had been placed under house arrest.

“The national armed forces have taken the correct decision, and they are counting on the support of the Venezuelan people,” Guaido said.

Maduro, for his part, has appeared to retain control of state institutions and the loyalty of senior military officers.

He has called Guaido a U.S-backed puppet who seeks to oust him in a coup. The government has arrested his top aide, stripped Guaido of his parliamentary immunity and opened multiple probes. It has also barred him from leaving the country, a ban Guaido openly violated earlier this year.

Last week, Guaido said his congressional ally – opposition lawmaker Gilber Caro – had been detained, and that 11 members of his team had been summoned to appear before the Sebin intelligence agency.

Lopez, seen with Guaido, appeared to have left his home for the first time since being placed under house arrest in 2017, after three years in jail.

“I have been freed by soldiers on the side of the constitution and President Guaido,” he tweeted. All of us have to mobilize. It’s time to win our freedom.”

A soldier in the group with Guaido, who identified himself just as Rivas, denied government accusations that they had been tricked into backing Guaido.

Spain, instrumental in setting the European Union line, said that, although it considered Guaido the legitimate leader of Venezuela, it did not support a military coup and wanted to see elections.