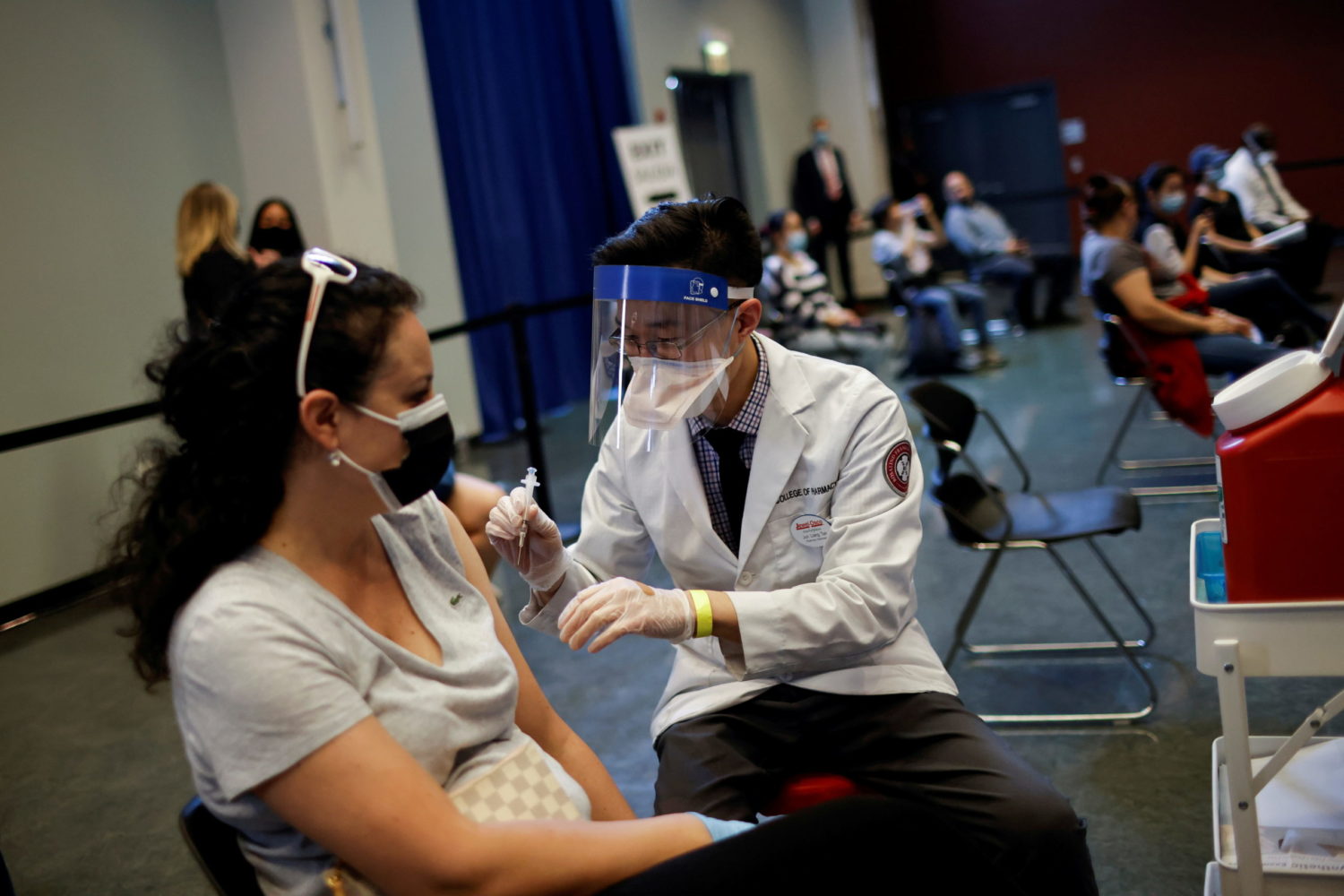 By Manas Mishra and Michael Erman

(Reuters) – U.S. federal health agencies on Tuesday recommended pausing the use of Johnson & Johnson’s COVID-19 vaccine after six women under 50 developed rare blood clots after receiving the shot, dealing a fresh setback to efforts to tackle the pandemic.

The move comes a week after European regulators said they had found a possible link between AstraZeneca’s COVID-19 vaccine and a similar rare blood clotting problem that led to a small number of deaths.

Johnson & Johnson’s (J&J) single dose vaccine – most COVID-19 shots are delivered over two doses – and AstraZeneca’s low-cost vaccine are seen as vital tools in the fight against a pandemic that has claimed more than three million lives.

An advisory committee to the U.S. Centers for Disease Control and Prevention (CDC) will meet on Wednesday to review the cases, and the U.S. Food and Drug Administration (FDA) will review the analysis, the agencies said in a joint statement.

All six cases involved women between the ages of 18 and 48, and the symptoms occurred six to 13 days after vaccination.

In the cases, a type of blood clot called cerebral venous sinus thrombosis (CVST) was seen in combination with low levels of blood platelets (thrombocytopenia).

The CDC and FDA said the adverse events appeared to be extremely rare.

“I think this is a very low risk issue, even if causally linked to the vaccine: 6 cases with about 7 million doses (lower than the risk of clots with oral contraceptives) is not something to panic about,” Dr. Amesh Adalja, an infectious disease expert at the Johns Hopkins Center for Health Security in Baltimore, said in an email.

“People are asking me if they should cancel their J&J vaccine appointments and I have told them not to but I know many will and this will stall progress in controlling the pandemic.”

J&J said it was working closely with regulators and noted no clear causal relationship had been established between the cases and the COVID-19 vaccine made by its Janssen unit.

One woman died and a second in Nebraska has been hospitalized in a critical condition, the New York Times reported, citing officials.

“The FDA recommendation to pause the administration of the Johnson and Johnson vaccine out of an abundance of caution makes sense in terms of the nature of the unusual and serious side effect not seen with the other vaccines,” said Dr. Robert Klugman at the UMass Memorial Medical Center in Massachusetts in an email.

“While the incidence is very low, the severity and potential for brain damage and other blood clot-related injuries is of great concern.”

J&J’s shares were down 3% before the opening bell.

The U.S. move comes less than a week after Europe’s drugs regulator said it was reviewing rare blood clots in four people in the United States who had received the J&J shot.

The J&J and AstraZeneca vaccines both use an adenovirus vector – a harmless cold virus that instructs human cells to produce a protein found on the surface of the coronavirus, thereby spurring the immune system to prepare an arsenal against the COVID-19-causing virus.

Among leading global COVID-19 vaccine developers, China’s CanSino Biological and Russia’s Gamaleya Institute with its Sputnik V vaccine are also relying on this approach. The Pfizer/BioNtech and Moderna vaccines use mRNA technology.

The rollout of J&J’s vaccine has been slowed by issues at production plants.

The company has supplied the United States with at least 20 million doses but is behind schedule on its deliveries. Problems at a Baltimore, Maryland plant run by outside contractor Emergent BioSolutions forced the companies to trash a batch of vaccine substance.

The plant – meant to be one of J&J’s main U.S. manufacturing facilities – has yet to be approved by U.S. regulators to supply vaccine doses, and J&J shipments to the states were expected to fall sharply next week.

J&J only began delivering its COVID-19 vaccine to European Union countries this week. It has committed to delivering 55 million doses to the bloc by the end of June and another 120 million in the third quarter.

J&J has been doing vaccinations in South Africa to study the effects on health workers, and had vaccinated just under 300,000 people there as of Monday, according to data from the country’s health department. J&J recently struck a deal with the African Union for up to 400 million doses.

Europe’s drugs regulator continues to recommend the use of AstraZeneca’s COVID-19 vaccine, saying the benefits outweigh the risks. Several EU countries, however, have limited its use to certain age groups.

Australia has no current plans to add J&J’s coronavirus vaccine to its immunization drive, authorities said on Tuesday, as it moves away from procuring vaccines under review for potential links to blood clots.

(Reporting by Manas Mishra in Bengaluru and Michael Erman in Maplewood, N.J., additional reporting by Julie Steenhuysen in Chicago and Ludwig Burger in Frankfurt; Editing by Sriraj Kalluvila and Mark Potter)