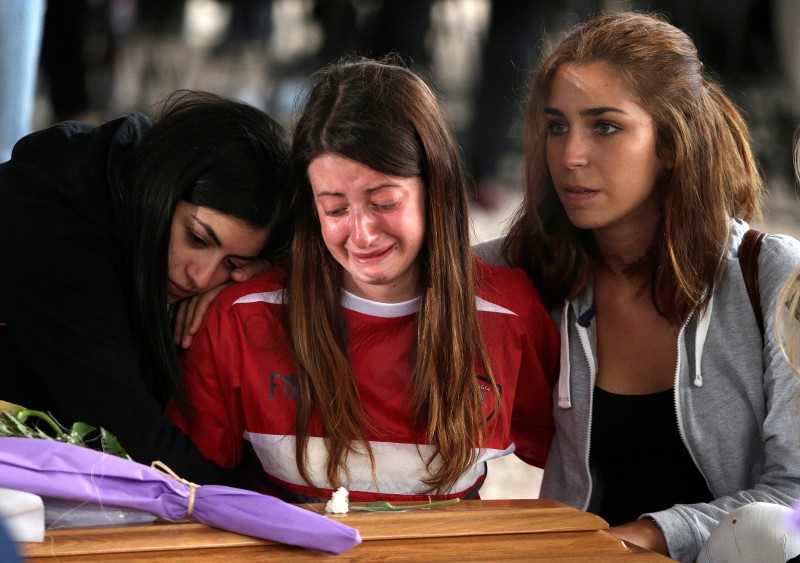 By Matteo Berlenga and Iona Serrapica

AMATRICE, Italy (Reuters) – Italy hurriedly revised preparations for a mass funeral for earthquake victims on Tuesday after protests by bereaved relatives, as crews continued to dig for bodies under mounds of rubble.

Family members had objected to plans to hold the ceremony in an aircraft hangar in the town of Rieti where the bodies had been stored. The funeral will instead be held in Amatrice, the place hardest-hit by last week’s 6.2-magnitude quake.

Of the 292 confirmed dead, 231 were found in Amatrice, which was left in ruins.

A number of foreigners were among the dead, including 11 Romanians and three Britons.

Tuesday’s funeral is for some three dozen of the victims. Many of those who died in Amatrice on Aug. 24 were not residents and their funerals are being held in their hometowns.

Workers used heavy machinery to gravel over an area on Amatrice’s outskirts where the ceremony will take place within sight of shattered buildings. 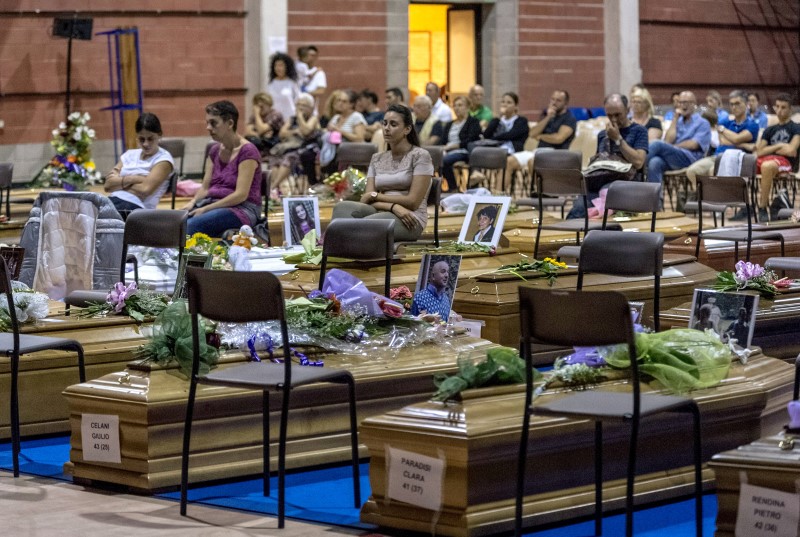 Coffins of some of the victims of the earthquake in central Italy are seen inside a gym in Ascoli Piceno, August 26, 2016. REUTERS/Adamo Di Loreto

Marquees were still being erected for the funeral ceremony as the first caskets arrived. A hearse and a van carrying at least four coffins had to be turned away until the work could be completed.

In the center of town emergency workers used mechanical diggers and bulldozers to search for bodies, an unknown number of which may still be trapped beneath dust and debris.

It is the second state-sponsored funeral in three days. On Saturday rites were held for victims of the quake from the adjoining Marche region. Amatrice is in the region of Lazio.

Controversy has grown over poor construction techniques, which may have been responsible for many deaths.

Investigators are looking into work done on the bell tower in Accumoli, which was recently restored but collapsed during the quake onto the home of a family of four, killing them all.

Italy sits on two seismic faultlines. Many of its buildings are hundreds of years old and susceptible to earthquake damage. 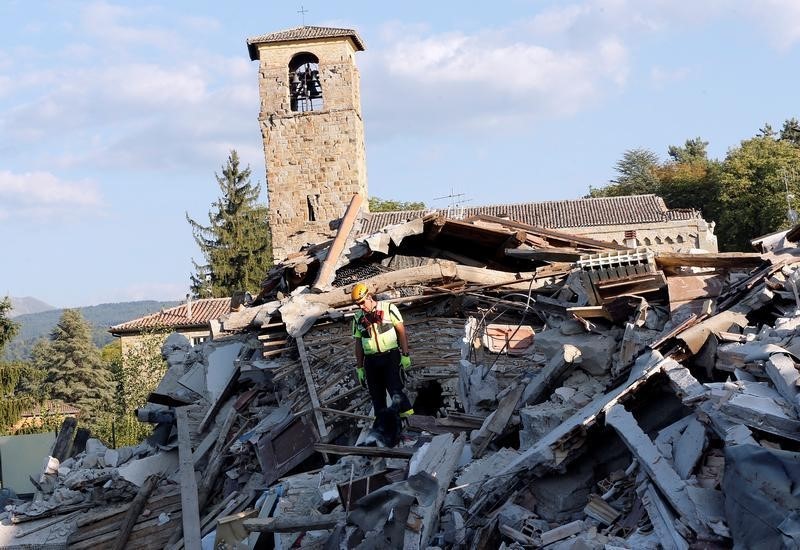 Residents of the hill town estimated that up to 10 people were still missing and emergency services said they had located three corpses in Amatrice’s Hotel Roma, which, like much of the historic center, was wrecked by Wednesday’s quake.

Deputy Mayor Gianluca Carloni said his uncle’s body had still not been recovered from the hotel, which was particularly busy at this time of year because of a food festival.

“It is absolutely vital to finish as soon as possible this initial (search) phase to make sure that there are no more bodies under the rubble,” he said.

Museums across Italy donated proceeds from their ticket sales on Sunday to help the rebuilding effort, while top flight soccer teams held a minute’s silence before their weekend matches out of respect for the victims.

Pope Francis led prayers for the dead in his weekly address in St Peter’s Square in Rome, saying he wanted to go to the earthquake zone to bring comfort to the survivors.

“Dear brothers and sisters, as soon as it is possible, I hope to come and visit you,” he said.

Priests in the quake zone held their regular Sunday services in large tents. Amatrice’s municipal website said the town had 100 churches, but every one was damaged by the disaster and many would have to be demolished.

With aftershocks continuing to rattle the region, including a magnitude 4.4 quake centered on the nearby city of Ascoli Piceno, residents were still struggling to absorb the disaster.

“It took me 20 years to get my house, and then, in just 10 seconds, it was gone, like so many others,” said Ascenzio Attenni, who lived in the hamlet of Sant’Angelo outside Amatrice, where eight people died.

“We have to thank God that we are alive,” he said, before breaking down in tears.

Rescue operations in most of the area were halted two days ago, but teams were still combing Amatrice, which is 105 km (65 miles) east of Rome. The fire service said it was trying to remove some of the fallen masonry at the Hotel Roma and create a safe path to retrieve the three bodies as soon as possible.

The Civil Protection Department lowered the official death toll on Sunday to 290 from a previously given 291. A number of foreigners were among the dead, including 11 Romanians, the foreign ministry in Bucharest said.

Many Romanians work in Italy and Bucharest said 14 of its nationals were still unaccounted for.

Italy has promised to rebuild the shattered communities and has said it will learn from the mistakes following a similar earthquake in the nearby city of L’Aquila in 2009, where much of the center is still out of bounds.

The rebuilding effort was stalled following allegations that organized crime groups had muscled in to obtain lucrative contracts. Italy’s anti-mafia chief Franco Roberti said the experience of L’Aquila would serve well this time around, but warned that the government could not lower its guard.

“The risks are there and it is pointless to pretend otherwise,” he told la Repubblica newspaper. “Post-quake reconstruction is always very appetising for criminal gangs and their business partners.”