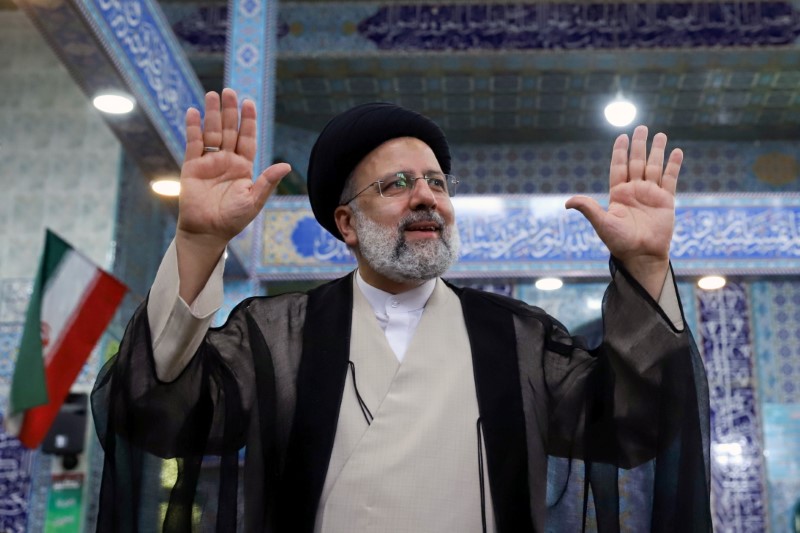 DUBAI (Reuters) – Millions of Iranians voted on Friday in a contest set to hand the presidency to a hardline judge who is subject to U.S. sanctions, though anger over economic hardship means many will heed calls for a boycott.

Senior officials appealed for a large turnout in an election widely seen as a referendum on their handling of the economy, including rising prices and unemployment and a collapse in the value of its currency.

“I urge everyone with any political view to vote,” judiciary head Ebrahim Raisi, the front-runner in the contest, said after casting his ballot.

“Our people’s grievances over shortcomings are real, but if it is the reason for not participating, then it is wrong.”

While state television showed long queues at polling stations in several cities, the semi-official Fars news agency reported 22 million or 37% of voters had cast ballots by 7:30 pm (1500 GMT), citing its own reporter. The interior ministry said it could not confirm turnout figures.

Raisi, 60, is backed by security hawks in his bid to succeed Hassan Rouhani, a pragmatist prevented under the constitution from serving a third four-year term in the post, which runs the government day-to-day and reports to Khamenei.

Supported by the powerful Revolutionary Guards Corps, Raisi, a close Khamenei ally who vows to fight corruption, is under U.S. sanctions for alleged involvement in executions of political prisoners decades ago.

Maryam, 52, a hairdresser in Karaj near Tehran, said she would not vote because “I have lost confidence in the system.”

“Every time I voted in the past, I had hope that my living standard would improve. But I lost hope when I saw the highest official in the country wasn’t brave enough to resign when he couldn’t make things better,” she said, referring to Rouhani.

Asked which candidate he preferred, Mohammad, 32, at a polling station in a hamlet in southern Iran, replied: “To be honest none of them, but our representative in parliament says we should vote for Raisi so that everything will improve.”

“My vote is a big NO to the Islamic Republic,” said Farzaneh, 58, from the central city of Yazd, referring to the country’s system of clerical rule. She said contrary to what state TV reported, “the polling stations are almost empty here”.

Mohammad, 40, an engineer, said he would not vote because “the results are known beforehand and more important, if Mr. Raisi was serious about tackling corruption he should have done so by now”.

While hundreds of Iranians, including relatives of dissidents killed since Iran’s 1979 Islamic revolution and political prisoners, have called for an election boycott, the establishment’s religiously devout core supporters are expected to vote for Raisi.

More than 59 million Iranians can vote. Polls close at 1930 GMT but can be extended for two hours. Results are expected around midday on Saturday.

A win for Raisi would confirm the political demise of pragmatist politicians like Rouhani, weakened by the U.S. decision to quit the nuclear deal and reimpose sanctions in a move that stifled rapprochement with the West.

With inflation and joblessness at about 39% and 11% respectively, the clerical leadership needs a high vote count to boost its legitimacy, damaged after a series of protests against poverty and political curbs since 2017.

Khamenei, not the president, has the final say on Iran’s nuclear and foreign policies, so a Raisi win would not disrupt Iran’s bid to revive the 2015 nuclear agreement and break free of sanctions.

Raisi was appointed by Khamenei to the job of judiciary chief in 2019. A few months later, Washington sanctioned him for alleged abuses including what rights groups say was his role in the executions of political prisoners in 1980s and the suppression of unrest in 2009.

Iran has never acknowledged the mass executions, and Raisi has never publicly addressed allegations about his role.

Raisi’s main rival is the moderate former central bank governor Abdolnaser Hemmati, who says a win for any hardliner will mean more sanctions.