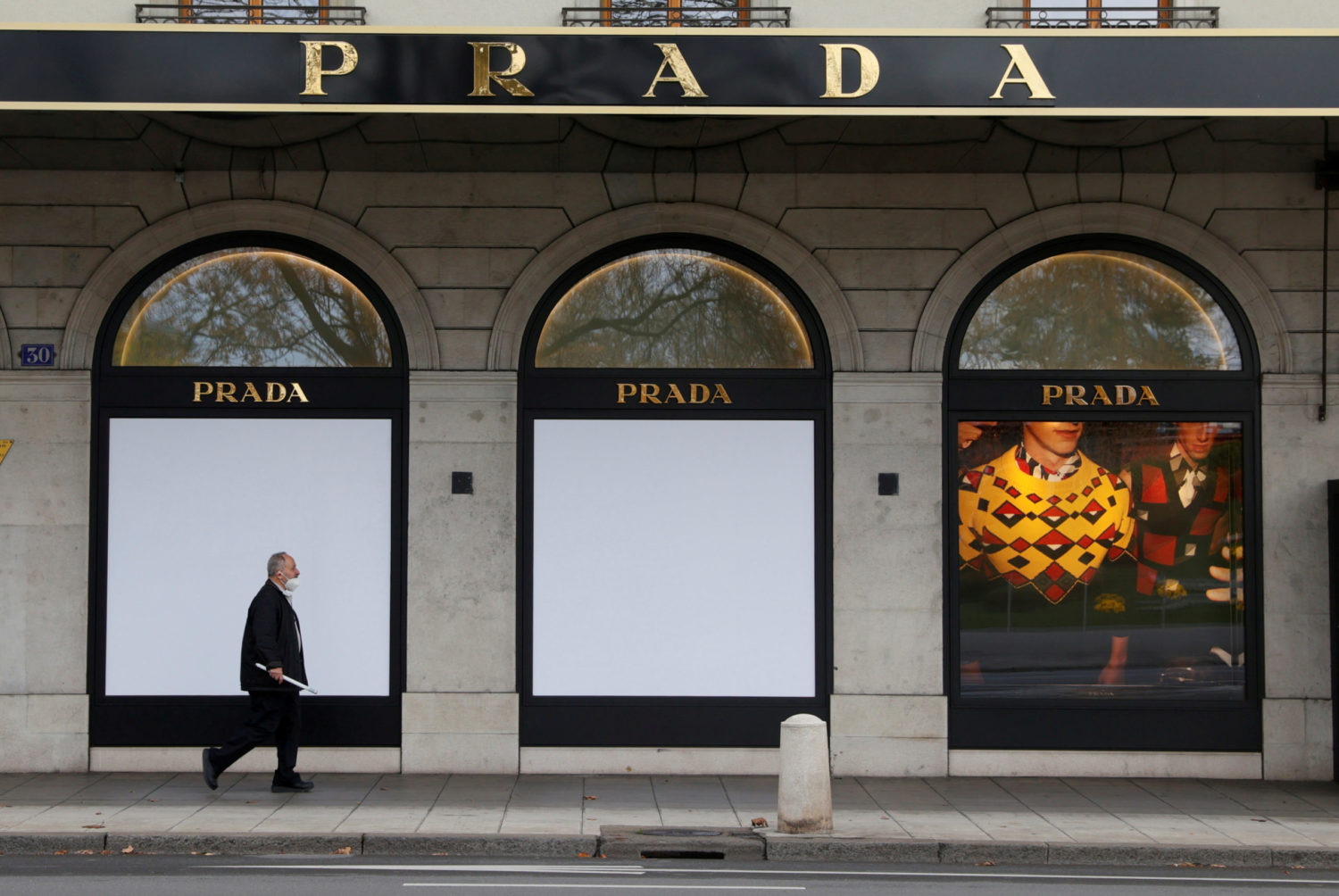 MILAN (Reuters) – Sales of luxury goods worldwide are set to fall by 23% to 217 billion euros ($258 billion) this year, their largest ever drop and first since 2009, due to the fallout from the coronavirus pandemic, consultancy Bain said on Wednesday.

The expected decline, despite a strong sales recovery in China, is at the lower end of a 20% to 35% range which Bain’s closely followed industry forecast had predicted in May.

That is due to a bigger than expected rebound during the summer, when lockdown measures were lifted or eased across the world and stores selling high-end handbags, clothes, jewelry and watches were reopened.

However, a resurgence of the pandemic in Europe and the United States since October has led to new restrictions and shop closures while uncertainty linked to the U.S. elections also weighed on consumer sentiment.

The only bright spot is China, where sales have surged since it began to emerge from the health crisis in the spring. Sales in mainland China are seen growing by 45% at current exchange rates to 44 billion euros this year.

“We have a two-speed world, with Europe and the U.S. strongly hit by the second wave and by social and political uncertainty, while China is relentlessly accelerating day after day,” Federica Levato, a partner at Bain, said.

Fourth-quarter sales are expected to drop by 10%, although the decline could be bigger depending on how much the new shutdowns hit the crucial Christmas season.

Revenues for the likes of Louis Vuitton owner LVMH, Hermes and Prada should partly recover in 2021, although Bain says it will take until the end of 2022 or even 2023 to return to 2019 levels.

The coronavirus crisis has accelerated three trends, Bain said, with purchases online almost doubling from 12% in 2019 to 23% in 2020, and e-commerce set to become the leading channel for luxury purchases by 2025.

International travel curbs have led to people buying more in their home countries, while shoppers born from 1981 onwards now account for almost 60% of total purchases. 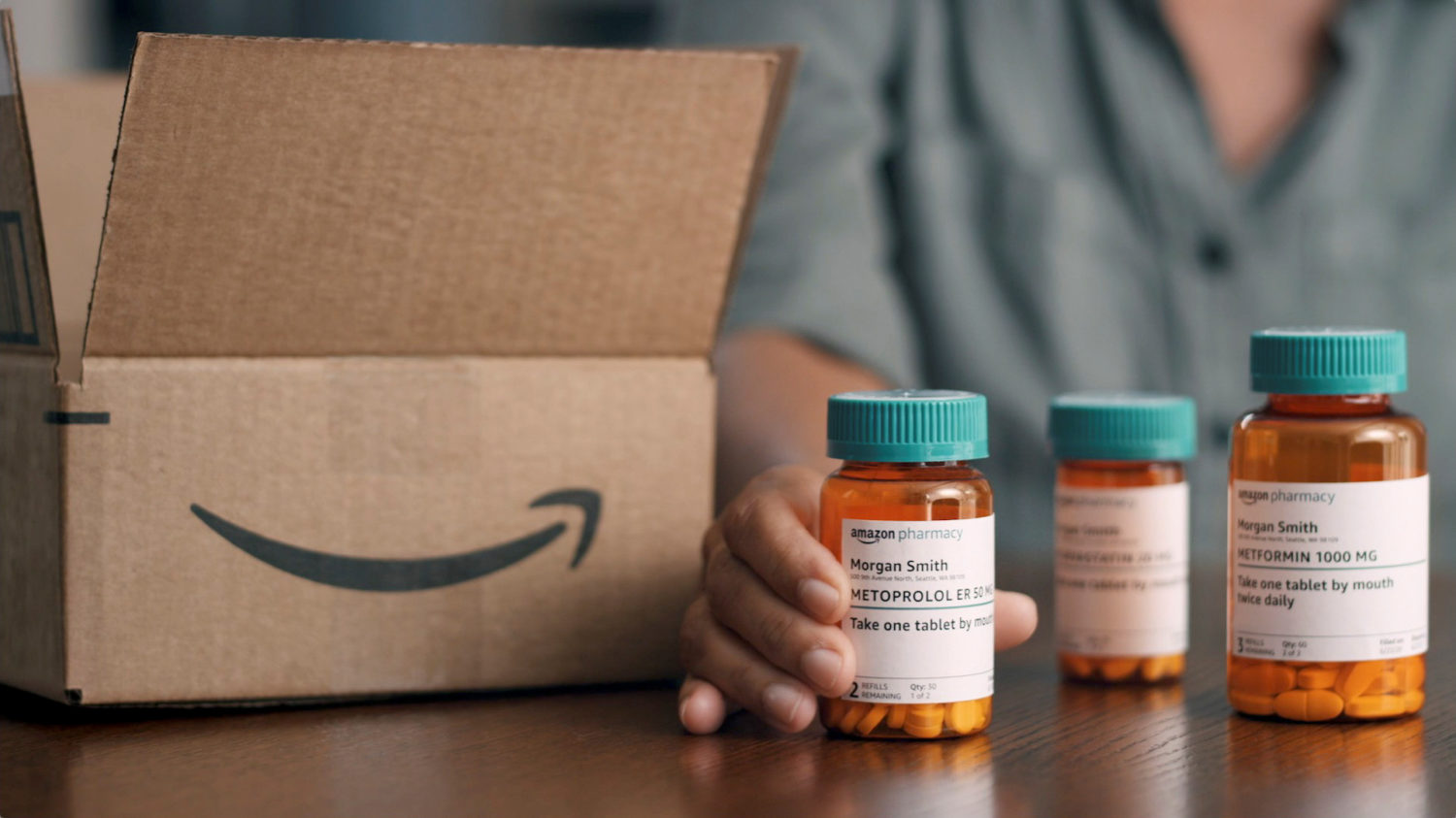 (Reuters) – Amazon.com Inc. on Tuesday launched an online pharmacy for delivering prescription medications in the United States, increasing competition with drug retailers such as Walgreens, CVS Health and Walmart.

Called Amazon Pharmacy, the new store lets customers price-compare as they buy drugs on the company’s website or app. Shoppers can toggle at checkout between their co-pay and a non-insurance option, heavily discounted for members of its loyalty club Prime.

The move builds on the web retailer’s 2018 acquisition of PillPack, which Amazon said will remain separate for customers needing pre-sorted doses of multiple drugs.

Shares of pharmacy chains, drug wholesalers and grocers fell before the bell. Amazon’s shares were up nearly 2% at $3,190.99.

Over the past two years, Amazon has worked to secure more state licenses for shipping prescriptions across the country, which had been an obstacle to its expansion into the drug supply chain, according to analyst notes from Jefferies Equity Research.

The company founded as an online bookseller has disrupted industries including retail, computing and now potentially pharmaceuticals, drawing criticism of its size and power from labor groups and lawmakers along the way.

TJ Parker, PillPack’s CEO and vice president of Amazon Pharmacy, said in a statement the retailer aimed to bring “customer obsession to an industry that can be inconvenient and confusing.”

Amazon injects a new look and feel into a space that has been dominated by a few large mail order pharmacies like CVS, Cigna Corp and UnitedHealth’s Optum, analysts from brokerage Evercore ISI said in a note.

“Consumers have historically not warmed to mail delivery of prescriptions, as customer service has been a weaker point of this service,” they added.

Shares of Walgreens Boots Alliance, Rite Aid and CVS tumbled between 8% and 12%, while those of drug distributors Mckesson Corp., Cardinal Health Inc. and Amerisourcebergen Corp were down 2% to 5%.

Should Prime members prefer buying in person, Amazon said its discounts on non-insurance purchases apply at more than 50,000 brick-and-mortar pharmacies – including those run by rivals. Inside Rx, a subsidiary of Cigna’s Evernorth, administers that benefit, Amazon said.

Still, the pandemic may help bring drug orders online. E-commerce has surged this year as governments told people to stay home to stave off infections of COVID-19, and Prime members – more than 150 million globally – may be receptive to buying medication online now that it’s from Amazon.

The company said Prime subscribers get up to 80% off generic and up to 40% off brand drugs when they pay without insurance, as well as two-day delivery.

Amazon’s online pharmacy is not yet available in Illinois, Minnesota, Louisiana, Kentucky, and Hawaii, a spokeswoman said.

(Reporting By Jeffrey Dastin in San Francisco and Caroline Humer in New York; Additional reporting by Manojna Maddipatla and Ankur Banerjee in Bengaluru; Editing by Lincoln Feast and Sriraj Kalluvila) 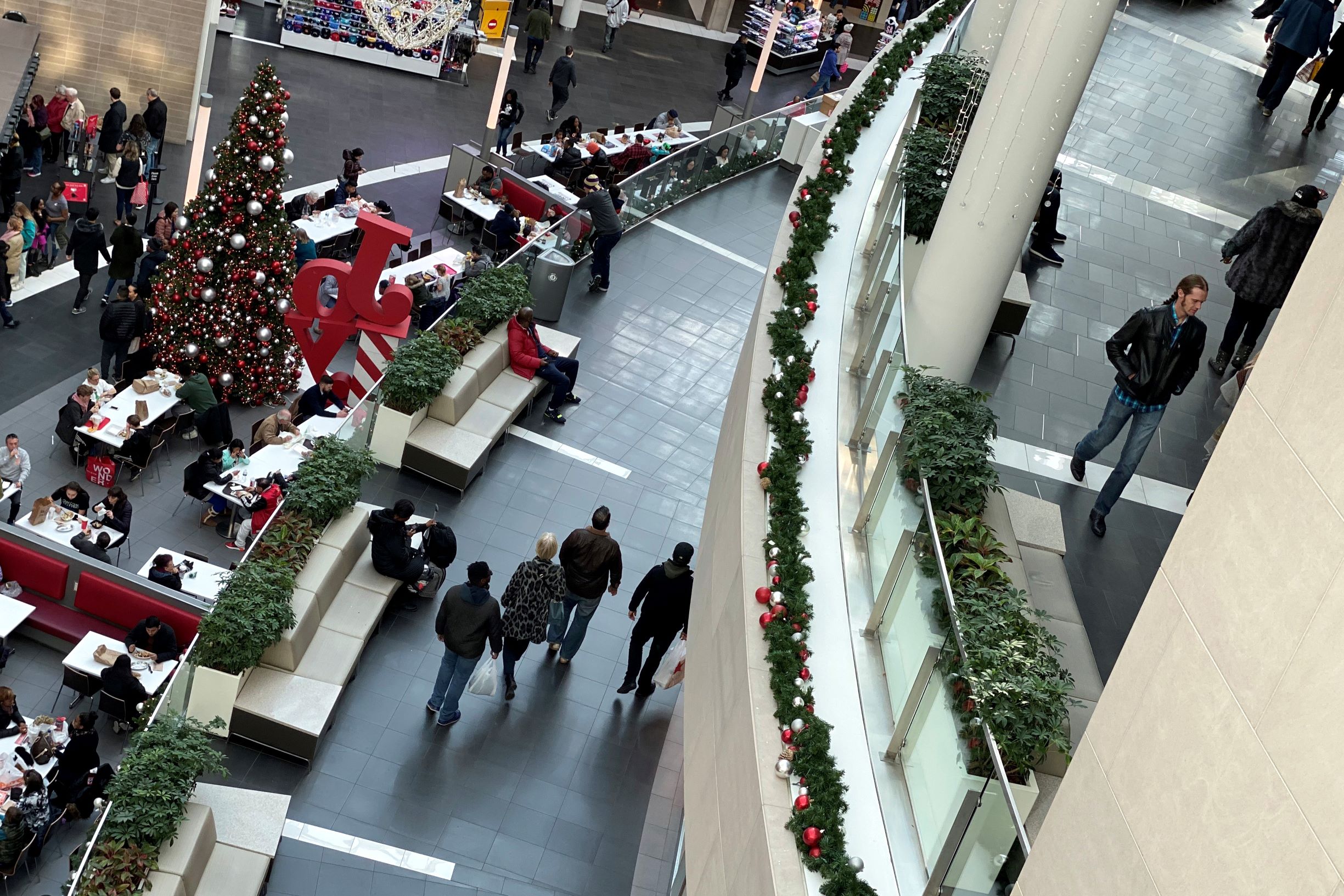 The holiday shopping season is a crucial period for retailers and can account for up to 40% of annual sales. But this year, Thanksgiving, which traditionally starts the U.S. holiday shopping period, was on Nov. 28, nearly a week later than last year’s Nov. 22, leaving retailers with six fewer days to drive sales between Thanksgiving and Christmas.

E-commerce sales this year made up 14.6% of total retail and rose 18.8% from the 2018 period, according to Mastercard’s data tracking retail sales from Nov. 1 through Christmas Eve.

“Due to a later than usual Thanksgiving holiday, we saw retailers offering omnichannel sales earlier in the season, meeting consumers’ demand for the best deals across all channels and devices,” Sadove said.

Retailers have invested heavily to provide same-day delivery, lockers for store pick-up and improve their online presence as they battle against retail giant Amazon.com Inc <AMZN.O> for market share.

U.S. President Donald Trump, whose support in the polls has been buoyed by strong economic data despite his impeachment by the House of Representatives, heralded the news in a tweet in all capital letters.

However, Mastercard spokesman William Tsang, citing 2018’s 5.1% growth in total sales, said this year’s holiday sales growth was not the biggest ever.

The White House had no immediate comment on the apparent discrepancy.

The holiday season was challenging for retailers after Amazon expanded its free return policy to include products that were not previously eligible, giving consumers until January to return even small purchases bought on the website.

The National Retail Federation had forecast U.S. holiday retail sales over the two months to increase between 3.8% and 4.2%. That compares with an average annual increase of 3.7% over the past five years.

The SpendingPulse report tracks spending by combining sales activity in Mastercard’s payments network with estimates of cash and other payment forms but excludes automobile sales.

(Reporting by Nivedita Balu and Ismail Shakil in Bengaluru and Andrea Shalal in Washington; Editing by Dan Grebler)

NEW YORK (Reuters) – U.S. states could reap billions in online sales tax revenue and buttress their budgets after the nation’s top court ruled on Thursday that e-commerce companies could be forced to collect the money, even if they have no physical presence in a state.

The Supreme Court’s ruling in favor of South Dakota and against Wayfair Inc and two other online retailers was a victory for state governments, and a boost for brick-and-mortar stores.

The effect is expected to be positive and widespread because 45 states impose sales taxes and until now were barred from requiring those companies to collect remote sales taxes.

That meant state and local governments lost as much as $13 billion of revenue in 2017, according to a federal report.

Now, states can push ahead with legislation requiring companies to collect and remit sales taxes for goods bought online elsewhere.

As many as 24 states and their local governments could see tax revenue gains of at least 1 percent, according to Fitch’s research.

For a large state like Texas, the combined state and local revenue growth could be as high as $1.2 billion per year and will likely grow over time, Walsh said.

Washington, Florida, South Dakota, Nevada and Tennessee get more than half of their total revenues from sales taxes, meaning big gains could be in store.

An analysis by Barclays found that Louisiana would get an estimated 3 percent bump in total tax receipts if it begins forcing out-of-state online retailers to collect sales taxes. Oklahoma could also see a sizeable 2.7 percent gain, Barclays found.

But the party does not extend to places that do not charge sales taxes: Alaska, Delaware, Montana, New Hampshire and Oregon.

“New Hampshire’s lack of a sales tax is a competitive advantage for our state, and this decision will unfairly punish small businesses that are the backbone of our economy,” U.S. Senator Maggie Hassan said in a statement.

The decision “will remake the landscape for state tax collection in the U.S.,” said Harley Duncan of the auditing firm KPMG.

However, the path is not clear. The court left room for future legal challenges, so state legislation could still face delays and backlash from the e-commerce industry.

The ruling “definitely goes out of its way to suggest there may have to be future litigation to decide ultimately where things will shake out,” said lawyer Paul Clement, who filed a brief backing Wayfair.

Even so, most states may look to pass bills similar to Washington state’s, said Max Behlke of the National Conference of State Legislatures.

Its law was effective even before the court ruling, Behlke said, by expanding sales tax collections to third-party marketplaces – a category that in most places has so far gone untaxed.

That led Amazon.com to start collecting taxes on its entire platform, including third-party merchants, in Washington starting in January.

Amazon then added Pennsylvania to that list after a similar law there went into effect April 1.

Even before that change, Pennsylvania got $202 million of online sales tax revenue in 2017 – 2-1/2 times as much as it did in 2014, when it received just $81.2 million, according to information the Pennsylvania Treasury provided to Reuters.

Ahead of the court ruling, Illinois enacted a budget that counts on $150 million in new tax revenue – to come from out-of-state internet retailers – for fiscal 2019, which begins July 1.

A new Connecticut law goes into effect at the end of this year to collect taxes from some online retailers. Now the legislature should consider going back into session to broaden that law and “eliminate the disadvantage retailers with physical locations in Connecticut have long struggled to overcome,” said Senate Republican President Pro Tempore Len Fasano.

In total, 38 states have considered and 15 enacted, measures aimed at collecting remote sales taxes since 2016.

“There has been pushback against these new laws but the new ruling gives states more support for these positions,” said Fitch’s Walsh. “I expect we will see both new legislation and additional legal challenges over the next few years.”

(Reporting by Hilary Russ in New York; Additional reporting by Karen Pierog in Chicago and Lawrence Hurly in Washington; Editing by Daniel Bases and Cynthia Osterman)