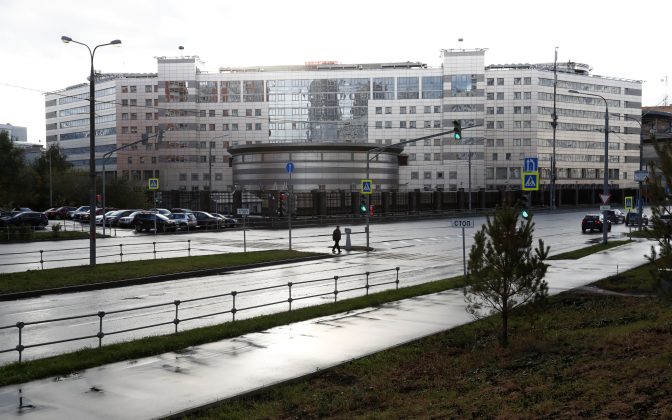 A general view shows the headquarters of the Main Directorate of the General Staff of the Armed Forces of the Russian Federation, formerly known as the Main Intelligence Directorate (GRU), in Moscow, Russia October 4, 2018. REUTERS/Stringer

LONDON (Reuters) – The West has accused Russia’s military intelligence agency (GRU) of running what it described as a global hacking campaign, targeting institutions from sports anti-doping bodies to a nuclear power company and the chemical weapons watchdog.

What is GRU and what does it do?

What is the GRU?

Russia’s military intelligence service is commonly known by the Russian acronym GRU, which stands for the Main Intelligence Directorate. Its name was formally changed in 2010 to the Main Directorate (or just GU) of the general staff, but its old acronym – GRU – is still more widely used.

Its published aims are the supply of military intelligence to the Russian president and government. Additional aims include ensuring Russia’s military, economic and technological security.

The GRU answers directly to the chief of the general staff, Valery Gerasimov, and the Russian defense minister, Sergei Shoigu, each of whom are thought to have access to Russia’s portable nuclear briefcase.

Russia’s two other main intelligence and security services were both created from the Soviet-era KGB: the Foreign Intelligence Service, or SVR, and the Federal Security Service, or FSB.

What are the GRU’s capabilities?

According to a Western assessment of GRU seen by Reuters, the GRU has a long-running program to run ‘illegal’ spies – those who work without diplomatic cover and who live under an assumed identity for years until orders from Moscow.

“It has a long-running program of ‘illegals’ reserved for the most sensitive or deniable tasks across the spectrum of GRU operations,” the assessment said.

The GRU is seen as a major Russian cyber player.

“It plays an increasingly important role in Russia’s development of Information Warfare (both defensive and offensive),” according to the Western assessment.

“It is an aggressive and well-funded organization which has the direct support of – and access to – [Russian President Vladimir] Putin, allowing freedom in its activities and leniency with regards to diplomatic and legislative scrutiny,” according to the assessment.

The GRU also has a considerable special forces unit. They are the elite of the Russian military.

“I don’t like rankings but the GRU is in the top levels of this business,” Onno Eichelsheim, director of the Netherlands Defence Intelligence and Security Service, told Reuters. “They are a very real threat.”

What are Western claims about GRU?

– The United States sanctioned GRU officers including its chief, Igor Korobov, for cyber attempts to interfere in the 2016 presidential election. Russia denied meddling in the election.

– Britain said GRU was behind the BadRabbit attack of 2017, the hack of the Democratic National Committee in 2016, and attacks on the computer systems of both the Foreign Office and the Defence Science and Technology Laboratory in 2018. Russia said the accusations were fiction.

– The Netherlands said it caught four GRU cyberspies trying to hack into the Organization for the Prohibition of Chemical Weapons. It said the same group, known as unit 26165, had targeted the investigation into the downing of Malaysia Airlines flight MH-17.

– The United States charged seven GRU officers with plots to hack the World Anti-Doping Agency which had exposed a Russian doping program.

– GRU played a significant role in the 2014 annexation of Crimea, the conflict in Ukraine and the 2008 conflict with Georgia.

Note: The GRU does not have its own public web site and does not comment publicly on its actions. Its structure, staff numbers and financing are state secrets.

What is GRU’s history?

Russian spies trace their history back to at least the reign of Ivan the Terrible in the 16th Century, who established a feared espionage service.

The GRU was founded as the Registration Directorate in 1918 after the Bolshevik Revolution. Soviet state founder Vladimir Lenin insisted on its independence from other secret services, which saw it as a rival.

While the once mighty KGB was broken up during the 1991 collapse of the Soviet Union, the GRU remained intact.

GRU officers played a significant role in some of the key junctures of the Cold War and post-Soviet history – from the Cuban Missile crisis to Afghan war and the annexation of Crimea.

The public was given a rare chance to see parts of the GRU’s Moscow headquarters when Putin visited it in 2006. He was shown taking part in shooting practice.