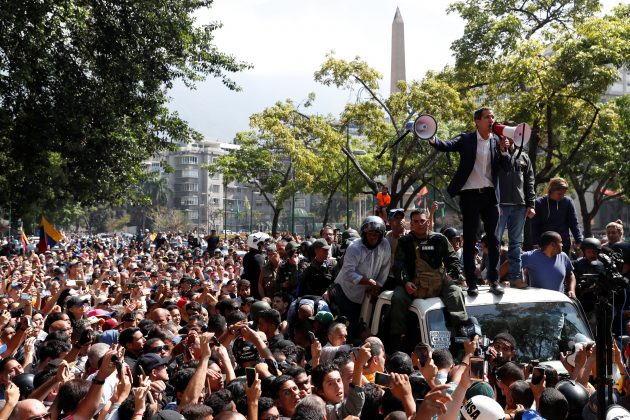 CARACAS (Reuters) – Venezuelan opposition leader Juan Guaido on Tuesday made his strongest call yet to the military to help him oust President Nicolas Maduro but there were no concrete signs of defection from the armed forces leadership.

Early on Tuesday, several dozen armed troops accompanying Guaido clashed with soldiers supporting Maduro at a rally in Caracas, and large anti-government protests in the streets turned violent. But by Tuesday afternoon an uneasy peace had returned and there was no indication that the opposition planned to take power through military force. 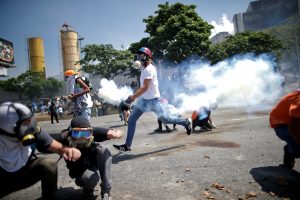 U.S. Secretary of State Mike Pompeo told CNN that “as we understand it” Maduro had been ready to depart for socialist ally Cuba, but had been persuaded to stay by Russia, which has also been a steadfast supporter.

In a message posted on his social media accounts on Tuesday evening, Guaido told supporters to take to the streets once again on Wednesday. He reiterated his call for the armed forces to take his side and said Maduro did not have the military’s support.

“Today Venezuela has the opportunity to peacefully rebel against a tyrant who is closing himself in,” Guaido said.

“Today the goal was a big show,” Maduro said, referring to the military members who sided with Guaido as a “small group.” “Their plan failed, their call failed, because Venezuela wants peace.”

Other U.S. officials said three top Maduro loyalists – Padrino, Supreme Court chief judge Maikel Moreno and presidential guard commander Ivan Rafael Hernandez Dala – had been in talks with the opposition and were ready to support a peaceful transition of power.

“They negotiated for a long time on the means of restoring democracy but it seems that today they are not going forward,” said U.S. envoy for Venezuela Elliott Abrams. U.S. national security adviser John Bolton said: “All agreed that Maduro had to go.” Neither provided evidence.

Flanked by uniformed men, Padrino said in a broadcast that the armed forces would continue to defend the constitution and “legitimate authorities,” and that military bases were operating as normal. Moreno issued a call for calm on Twitter.

Guaido, the leader of the National Assembly, invoked the constitution to assume an interim presidency in January, arguing that Maduro’s re-election in 2018 was illegitimate. But Maduro has held on, despite economic chaos, most Western countries backing Guaido, increased U.S. sanctions, and huge protests. 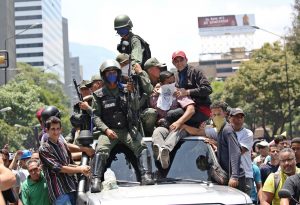 Soldiers ride on top of a car with supporters of Venezuelan opposition leader Juan Guaido (not pictured), who many nations have recognised as the country’s rightful interim ruler, during anti-government protests, in Caracas, Venezuela April 30, 2019. REUTERS/Carlos Eduardo Ramirez

Tuesday’s move was Guaido’s boldest effort yet to persuade the military to rise up against Maduro. If it fails, it could be seen as evidence that he lacks sufficient support. It might also encourage the authorities, who have already stripped him of parliamentary immunity and opened multiple investigations into him, to arrest him.

Tens of thousands of people marched in Caracas in support of Guaido early on Tuesday, clashing with riot police along the main Francisco Fajardo thoroughfare. A National Guard armored car slammed into protesters who were throwing stones and hitting the vehicle.

Human rights groups said 109 people were injured in the incidents, most of them hit with pellets or rubber bullets.

Venezuela is mired in a deep economic crisis despite its vast oil reserves. Shortages of food and medicine have prompted more than 3 million Venezuelans to emigrate in recent years.

The slump has worsened this year with large areas of territory left in the dark for days at a time by power outages.

“My mother doesn’t have medicine, my economic situation is terrible, my family has had to emigrate. We don’t earn enough money. We have no security. But we are hopeful, and I think that this is the beginning of the end of this regime,” said Jose Madera, 42, a mechanic, sitting atop his motorbike.

In a video on his Twitter account, Guaido was accompanied by men in military uniform and leading opposition politician Leopoldo Lopez, a surprise public appearance for a man who has been under house arrest since 2017.

Oil prices topped $73 before easing, partly driven higher by the uncertainty in Venezuela, an OPEC member whose oil exports have been hit by the U.S. sanctions and the economic crisis.

The crisis has pitted supporters of Guaido, including the United States, the European Union, and most Latin American nations, against Maduro’s allies, which include Russia, Cuba and China.

The White House declined to comment on whether Washington had advance knowledge of what Guaido was planning.

Carlos Vecchio, Guaido’s envoy to the United States, told reporters in Washington that the Trump administration did not help coordinate Tuesday’s events.

“This is a movement led by Venezuelans,” he said.

But accusations flew back and forth, with Venezuelan Foreign Minister Jorge Arreaza saying the events had been “directly planned” in Washington and Bolton saying that fears of Cuban retaliation had propped up Maduro. Neither provided evidence.

Trump threatened “a full and complete embargo, together with highest-level sanctions” on Cuba for its support of Maduro.

Brazil’s right-wing President Jair Bolsonaro threw his support behind Guaido and said Venezuelans were “enslaved by a dictator.” But his security adviser, a retired general, said Guaido’s support among the military appeared “weak.”

Russia’s foreign ministry on Tuesday accused the Venezuelan opposition of resorting to violence in what it said was a brazen attempt to draw the country’s armed forces into clashes. Turkey also criticized the opposition.

The United Nations and other countries urged a peaceful solution and dialogue.