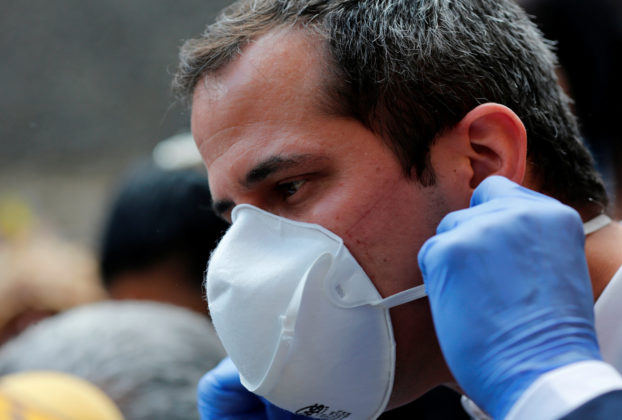 CARACAS (Reuters) – Venezuela’s opposition said on Thursday the United States has granted it access to millions of dollars of frozen Venezuelan government funds to support efforts to combat the spread of COVID-19 in the country.

The U.S. Treasury Department had approved the release of the funds, the opposition said in a statement without specifying the total amount.

The statement said part of the released funds would go to pay some 62,000 health workers $300. During a live appearance on Twitter on Thursday night, opposition leader Juan Guaido said health workers could register accounts to receive payments of $100 a month starting Monday.

Healthcare workers in Venezuela can earn as little as $5 a month.

Guaido first announced the additional support for healthcare workers four months ago, but distribution required a permit from the Office of Foreign Assets Control (OFAC), as the frozen funds were held by the New York Federal Reserve.

The opposition plans to distribute the funds using AirTM, a digital payment platform, but on Thursday, the website was blocked in Venezuela.

“You have to be very bad to block an account for men and women who are giving everything with conviction to protect our people when they are going to receive a bonus,” said Guaido.

The opposition leader added healthcare workers would be sent a manual with the steps to download a virtual private network (VPN) so they could circumvent the restrictions. AirTM also tweeted instructions how to use a VPN.

Guaido has been recognized by more than 50 countries as Venezuela’s rightful president after assuming an interim presidency in 2019 on the grounds that Maduro’s 2018 re-election was fraudulent.

In July, the opposition obtained permission to distribute $17 million in funds frozen in the United States that would be channeled through international health organizations to purchase supplies for medical workers.

The license also approves another $4.5 million to support Venezuelans at risk of death, an opposition press release said.

Venezuela is suffering economic collapse and its crumbling health system has so far registered 37,567 cases of COVID-19 and 311 deaths, although experts say the number is likely to be higher due to widespread insufficient testing.