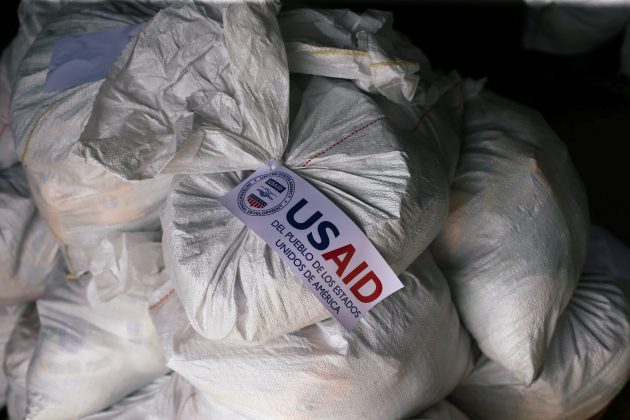 Sacks containing humanitarian aid are pictured at a warehouse near the Tienditas cross-border bridge between Colombia and Venezuela in Cucuta, Colombia February 14, 2019. REUTERS/Edgard Garrido

MUNICH (Reuters) – U.S. military aircraft are expected to deliver more than 200 tons of humanitarian aid to the Venezuelan border in Colombia, with the shipment likely to take place on Saturday, a U.S. official said on Friday.

The official, who spoke on condition of anonymity, said the U.S. State Department planned to make an announcement about the shipment on Friday but provided no further details. The State Department did not immediately respond to a request for comment.

The U.S. special envoy on Venezuela last week said the aid effort was being coordinated with the opposition team but said the aid would not be forced into Venezuela.

Venezuelan President Nicolas Maduro has overseen an economic collapse in the oil-rich South American country that has left millions struggling to buy food and medicines and has fueled an unprecedented migration crisis in the region.

An aid convoy supplied by the United States and Colombia arrived in the Colombian border town of Cucuta last week, where it is being held in warehouses. Maduro has refused to let supplies in.

Self-declared president Juan Guaido, the opposition leader, told a huge rally of supporters on Tuesday that humanitarian aid would enter the country on Feb. 23.

Guaido invoked constitutional provisions to declare himself interim president last month, arguing that Maduro’s 2018 re-election was a sham. Most Western countries, including the United States and many of Venezuela’s neighbors, have recognized Guaido as the legitimate head of state.

Maduro retains the backing of Russia and China and control of Venezuelan state institutions including the military.

Seeking to strengthen support for Guaido, the United States has said it will try to channel aid to Venezuela via Colombia and possibly Brazil.

Maduro has called the aid a U.S.-orchestrated show and denies any crisis. However, opposition member Gustavo Tarre has said the sole aim is to ease “the suffering of Venezuelans” and has denied any political, economic or military motive. [nL1N2090UC]

One thought on “U.S. to deliver over 200 tons of aid to Venezuelan border”