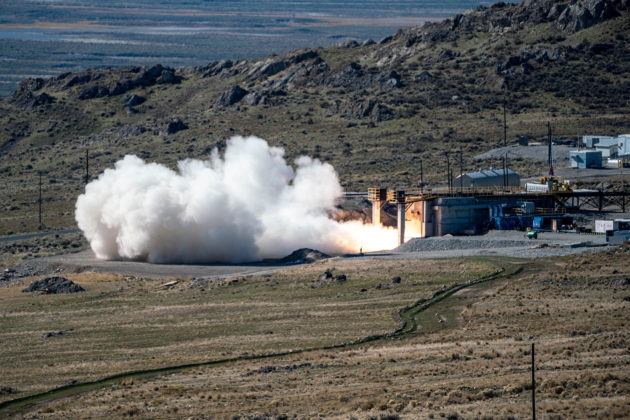 The US Navy, in collaboration with the US Army, conducts a static fire test of the first stage of the newly developed 34.5" common hypersonic missile that will be fielded by both services, in Promontory, Utah, U.S., in this handout image taken on October 28, 2021. Northrop Grumman/Handout via REUTERS

The United States and its global rivals have intensified their drive to build hypersonic weapons – the next generation of arms that rob adversaries of reaction time and traditional defeat mechanisms. Defense contractors hope to capitalize as they make the weapons and develop new detection and defeat mechanisms.

“We are on schedule for the upcoming flight test of the full common hypersonic missile,” said Vice Admiral Johnny Wolfe Jr, Director, Navy’s Strategic Systems Programs, lead designer on the program. That flight test, of the combined boost rocket and hypersonic weapon, is slated to happen before Autumn 2022.

Last week in Kodiak, Alaska, the U.S. failed a hypersonic weapon test when the booster failed.

U.S. military services will use the common hypersonic missile as a base to develop individual weapon systems and launchers tailored for launch from sea or land.

The common hypersonic missile will consist of the first stage solid rocket motor as part of a new missile booster combined with the Common Hypersonic Glide Body (CHGB).

Arms makers Lockheed Martin Corp, Northrop Grumman Corp and Raytheon Technologies Corp all touted their hypersonic weapons programs at the top of their quarterly earnings calls this week as world focus shifted to the new arms race for an emerging class of weapon.

(Reporting by Mike Stone in Washington; Editing by David Gregorio and Marguerita Choy)