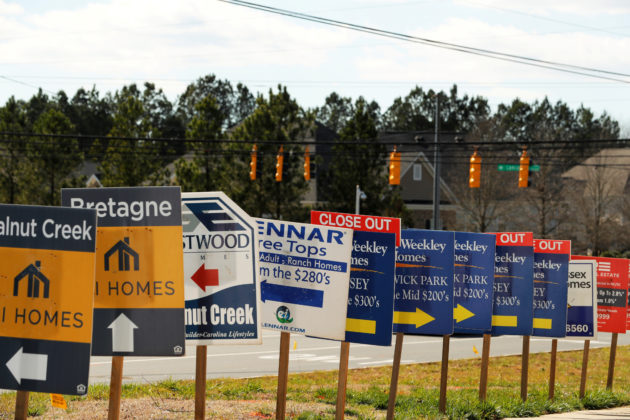 The report from the Commerce Department on Wednesday suggested the housing market would continue to underpin the economy’s recovery from the COVID-19 recession. Momentum could, however, ebb in the near term after winter storms wreaked havoc this month in Texas and large parts of the South region.

Higher house prices because of the tight inventory resulting from lack of land and very expensive lumber could push home ownership out of the reach of many first-time buyers.

“There is an insatiable demand for homes right now, and it can’t be met by resales of existing homes, so people are signing contracts for new homes,” said Holden Lewis, home and mortgage expert at NerdWallet.

The median new house price increased 5.3% from a year earlier to $346,400 in January. New home sales are drawn from a sample of houses selected from building permits and tend to be volatile on a month-to-month basis. New home sales surged 19.3% on a year-on-year basis in January.

Sales increased in the South, Midwest and West, but declined in the Northeast. They were concentrated in the $200,000-$749,000 price range. Sales below the $200,000 price bracket, the sought-after segment of the market, accounted for only 6% of transactions last month.

Stocks on Wall Street were trading higher, with the PHLX housing index outperforming the broader market. The dollar gained versus a basket of currencies. U.S. Treasury prices were lower.

The National Association of Realtors reported last week that the supply of previously owned homes available for sale plunged to a record low in January. That has pushed buyers toward the market for new homes. Demand for housing is being driven by Americans seeking more space for home offices and schooling as the year-long coronavirus pandemic drags on.

Though mortgage rates have risen in recent weeks in tandem with U.S. Treasury yields as investors anticipate stronger economic growth and higher inflation, the 30-year fixed rate remains well below 3%.

A separate report from the Mortgage Bankers Association on Wednesday showed applications for loans to buy a home decreased 12% last week from a week earlier. Mortgage loan applications were 7% higher compared to the same period last year.

Economists believed the week-to-week decline in applications reflected disruptions caused by the snow storms, which left large swathes of Texas in the dark and without water supplies.

“We would expect a bounce-back over the next few weeks as activity resumes,” said Veronica Clark, an economist at Citigroup in New York. “Housing sector activity should continue to be supportive of GDP growth at least through the first half of 2021.”

Housing and manufacturing have outperformed other sectors of the economy during the pandemic. The government reported last week that building permits soared in January to their highest level since May 2006. But expensive inputs and lack of land pose a threat to continued robust housing market gains.

According to a survey of single-family homebuilders this month, record-high lumber prices were “adding thousands of dollars to the cost of a new home and causing some builders to abruptly halt projects.” Softwood lumber prices jumped by historic 73% on a year-on-year basis in January.

“Strong demand, a shortage of supply and rapidly rising prices is the perfect combination of factors that should convince builders that now remains a really good time to get the shovels in the ground,” said Joel Naroff, chief economist at Naroff Economics in Holland, Pennsylvania.