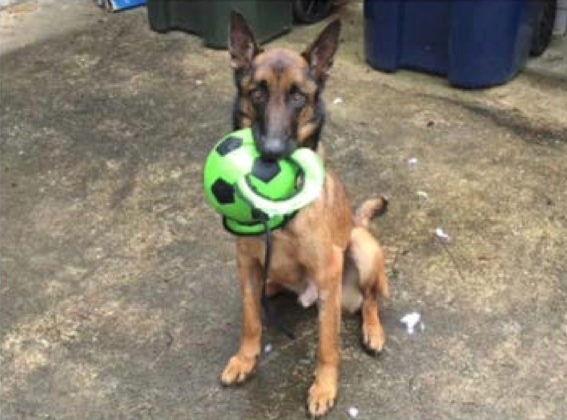 Mencey, a 3-year-old Belgian Malinois explosive-detecting dog that was euthanised in the United States in 2018 after he had been returned from Jordan for treatment of a tick-borne disease, is seen in an undated photo in a report by the U.S. State Department's Office of Inspector General. U.S. Department of State/Handout via REUTERS

WASHINGTON (Reuters) – The U.S. State Department said on Monday it has stopped sending explosive-detecting dogs to Jordan and Egypt over concerns of deaths of deployed dogs from causes like heat stroke and poisoning.

The decision came after the State Department’s Office of Inspector General identified in September the deaths of two dogs sent to Jordan, the largest recipient of the dogs. A second report released last Friday put the total deaths at seven.

Some 135 dogs are in the Antiterrorism Assistance Program, which helps eight countries with border and aviation security. Dogs already working in Jordan and Egypt will remain there while U.S. authorities demand measures to improve the animals’ conditions and handling, a State Department official told reporters.

Prompted by a hotline complaint after the September report, the Inspector General found that two more dogs sent to Jordan had died, one of heat stroke and another of poisoning from insecticide sprayed in or near the kennel.

Three of the 10 dogs sent to Egypt under the program also died: one of lung cancer, one from a ruptured gall bladder and the other from heat stroke, the report found.

According to the September report, a veterinarian told the Inspector General’s office that “heat injuries are cases of negligence and improper care and are not accidental” and that dogs who die of heat stroke “suffer a terrible death.”

The Inspector General found that dogs were sent to the foreign partners without signed written agreements outlining standards of care and that there were no adequate follow-up checks on dogs’ wellbeing.

“Improving health and welfare is something that’s continual and gradual. It will not happen overnight, and that’s why improving kennel conditions, improving how many times they check on the canines – those are all things we’re actively working on,” another State Department official said.