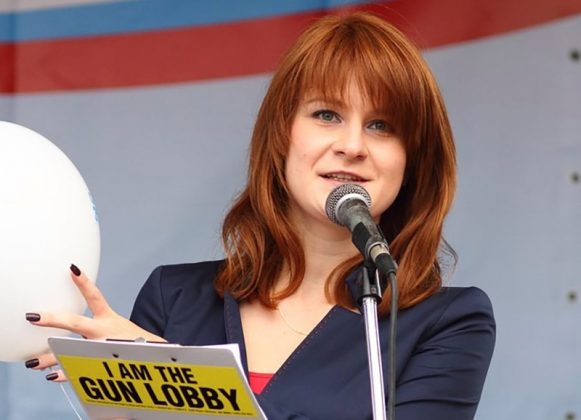 Public figure Maria Butina delivers a speech during a rally to demand the expanding of rights of Russian citizens, in this undated handout photo obtained by Reuters on July 17, 2018. Press Service of Civic Chamber of the Russian Federation/Handout via REUTERS

WASHINGTON (Reuters) – A U.S. grand jury returned an indictment against a Russian woman on Tuesday, and added a charge accusing her of acting as a Russian government agent while developing ties with American citizens and infiltrating political groups.

Maria Butina, who studied at American University in Washington and is a founder of the pro-gun Russian advocacy group Right to Bear Arms, was charged in a criminal complaint on Monday with conspiracy to take actions on behalf of the Russian government.

Tuesday’s grand jury indictment added a more serious charge of acting as an agent of the Russian government, which carries a maximum penalty of 10 years in prison. The conspiracy charge carries a maximum five-year prison term.

Butina has not been charged with espionage or with being a member of a Russian intelligence service.

She was arrested on Sunday and is scheduled to appear on Wednesday in federal court in Washington, the Justice Department said. 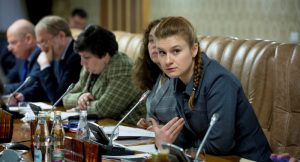 Public figure Maria Butina (R) attends a meeting of a group of experts, affiliated to the government of Russia, in this undated handout photo obtained by Reuters on July 17, 2018. Press Service of Civic Chamber of the Russian Federation/Handout via REUTERS

Robert Driscoll, an attorney for Butina, said she was not a Russian agent.

Butina is accused of operating at the direction of a high-level official of the Russian Central Bank who was recently sanctioned by the U.S. Treasury, the Justice Department said.

Court records did not name the official.

Butina has appeared in numerous photographs on her Facebook page with Alexander Torshin, the deputy head of Russia’s Central Bank who was sanctioned by the U.S. Treasury Department in April.

A person familiar with the matter has told Reuters that Butina worked for him as an assistant. Other media reported on a business relationship between Butina and Torshin.

Torshin did not reply to a request for comment on Monday and the Russian Central Bank declined to comment.

The Justice Department said in its complaint that Butina worked with two unnamed U.S. citizens and the Russian official to try to influence American politics and infiltrate a pro-gun rights organization.

The complaint did not name the group, however photos on her Facebook page showed that she attended events sponsored by the National Rifle Association. The NRA did not reply to a request for comment.