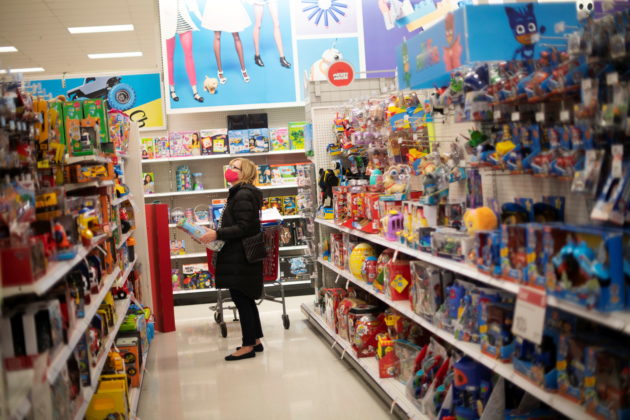 FILE PHOTO: A shopper wearing a face mask due to the coronavirus disease (COVID-19) pandemic browses toys at a Target store in King of Prussia, Pennsylvania U.S. November 20, 2020. REUTERS/Mark Makela

WASHINGTON (Reuters) -U.S. consumer prices increased by the most in nearly 12 years in April as booming demand amid a reopening economy pushed against supply constraints, which could fuel financial market fears of a lengthy period of higher inflation.

The report from the Labor Department on Wednesday also showed a strong building up of underlying price pressures. Demand is being driven by nearly $6 trillion in government relief since the COVID-19 pandemic started in the United States in March 2020 and the vaccination of more than a third of the population.

Federal Reserve Chair Jerome Powell and many economists largely view higher inflation as transitory, with supply chains expected to adapt and become more efficient. But there are concerns that inflation could linger amid reports that companies are raising wages as they compete for scarce workers.

Though job openings are at a record 8.1 million and nearly 10 million people are officially unemployed, companies are scrambling for labor. Generous unemployment benefits, fears of contracting COVID-19, parents still at home caring for children and pandemic-related retirements have been blamed for the disconnect. Average hourly earnings jumped in April.

Economists polled by Reuters had forecast the CPI climbing 0.2% in April.

In the 12 months through April, the CPI shot up 4.2%. That was the largest gain since September 2008 and followed a 2.6% increase in March. The jump mostly reflected the dropping of last spring’s weak readings from the calculation.

Those so-called base effects are expected to push annual inflation even higher in the months ahead.

U.S. stock index futures extended losses on the data, which investors feared could force the Fed to raise interest rates sooner than expected. The dollar rose against a basket of currencies. U.S. Treasury prices were lower.

The Fed slashed its benchmark overnight interest rate to near zero and is pumping money into the economy through monthly bond purchases. The U.S. central bank has signaled it could tolerate higher inflation after years of lower inflation.

Excluding the volatile food and energy components, the CPI soared 0.9%, the largest gain since April 1982. The so-called core CPI rose 0.3% in March. There were increases in prices for used cars and trucks, shelter, airline fares, recreation, motor vehicle insurance as well as household furnishings.

The Fed tracks the core personal consumption expenditures (PCE) price index for its 2% inflation target, a flexible average. The core PCE price index is at 1.8%.