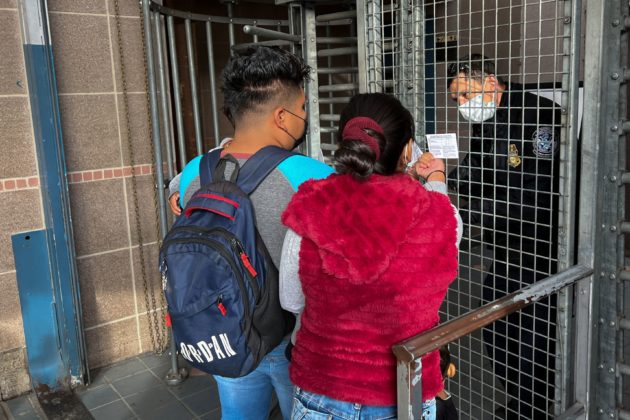 Leo and Nancy display their vaccination records as they attempt to seek asylum after the U.S. reopened land borders to vaccinated travelers for the first time since coronavirus disease (COVID-19) restrictions were imposed, in Nogales, Mexico November 8, 2021. Picture taken November 8, 2021. REUTERS/Caitlin O'Hara

NOGALES, Mexico (Reuters) – Leo fled his hometown in southern Mexico after his uncle was murdered by gang members and he received death threats. Earlier this year, he, his wife and their two children headed to the U.S.-Mexico border hoping to claim asylum.

After months of waiting, he hoped he would finally get his chance on Monday. But even as U.S. borders opened for travelers vaccinated against COVID-19, they remained closed to asylum seekers.

When Leo, 23, and his family approached the port of entry in Nogales, Mexico with his and his wife’s vaccination cards in hand, they were told by a border official they could not enter and seek asylum.

“I feel dispirited and sad,” said Leo, who asked his last name not be published for fear of reprisals from the gang he fled. President Joe Biden “is just continuing the same policies of Donald Trump.”

Biden has kept in place a controversial U.S. Centers for Disease Control and Prevention (CDC) order, first implemented by his Republican predecessor Trump in March 2020, that allows migrants to be immediately expelled without an opportunity to seek asylum.

The Biden administration has said the CDC’s order, known as Title 42, remains necessary to prevent the spread of COVID-19, as asylum seekers are processed in crowded settings at the border.

Any foreign national attempting to enter the United States without proper documentation will be subject to expulsion regardless of vaccination status, according to the Department of Homeland Security.

Advocates have criticized the Biden administration’s continuation of the expulsion policy as borders reopen.

In September, a federal judge ordered the Biden administration to stop expelling family units – parents or legal guardians arriving with their children – under the Title 42 order. The administration appealed, and a higher court put the judge’s ruling on hold as the case moves forward.

Last month, more than 1,300 medical professionals signed letters to the CDC urging it to end the border expulsions order, saying it lacked epidemiological evidence to justify it and put migrants at risk.

New York-based nonprofit Human Rights First has documented more than 7,600 kidnappings and other attacks on migrants stuck in Mexico who were blocked from entering the United States since Biden took office in January.

Leo has been working in construction to pay rent in Nogales, but he says his earnings are not enough to support his family. “They abuse you because they know you are not from here, they pay you what they want,” he said.

He is also worried about his children getting hit by a stray bullet when gunshots ring out at night. The U.S. State Department recommends Americans reconsider travel to the Mexican state of Sonora, where Nogales is located, due to crime and kidnapping.

“We were fleeing a place that was dangerous,” said Leo. “And here it is the same.”