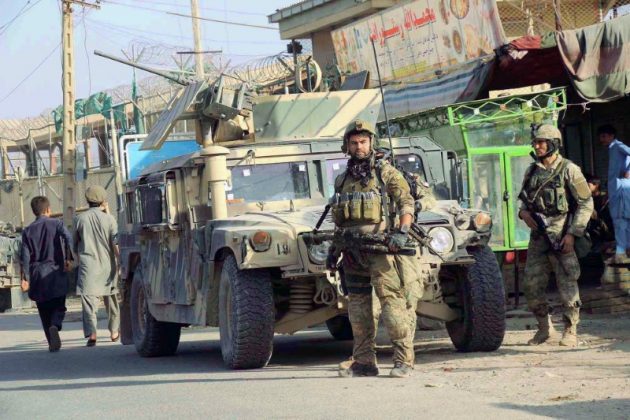 KUNDUZ, Afghanistan (Reuters) – Fighting in the northern Afghan city of Kunduz has led to a “rapidly deteriorating” humanitarian situation, officials said on Thursday, leaving thousands of people with limited access to food, water, or medical care.

Street-to-street gun battles have continued for four days after Taliban militants slipped past the city’s defenses on Monday.

Government troops, backed by U.S. special forces and air strikes, have repeatedly declared that they are in control of the city, but residents report that heavy fighting has forced many people to flee.

The fighting has forced as many as 10,000 people from their homes in Kunduz, the United Nations reported, with those who remain facing serious water, food and electricity shortages, as well as threats from the fighting.

“Many families were unable to bring their possessions with them and are in a precarious position,” Dominic Parker, head of the U.N.’s humanitarian coordination office, said in a statement. “We have had reports that some families have been forced to sleep out in the open and many have few food supplies.”

Among those fleeing Kunduz are about two-thirds of the staff at the city’s main public hospital, which was struck by several rockets and small arms fire, said Marzia Yaftali Salaam, a doctor.

The 200-bed public hospital is the main provider of medical care in Kunduz after a more advanced trauma center run by Medecins Sans Frontieres was destroyed by an American air strike last year.

In the past three days, the hospital has been inundated by at least 210 patients, many of them civilians, including women and children, wounded in the fighting, Salaam said.

“Many of the wounded had to be carried to clinics in surrounding districts and private clinics in the city,” she said. “If the situation remains the same, we may be forced to halt our services.”

During a lull in the fighting on Wednesday, nearly 50 casualties were rushed to the hospital in the span of a few hours, said Hameed Alam, head of the public health department in Kunduz.

The U.S. military command in Kabul said Afghan forces are “defeating Taliban attempts to take Kunduz,” with reinforcements on the way and commandos continuing to clear “isolated pockets” of Taliban fighters.

The Taliban, who ruled Afghanistan with an iron fist from 1996 to 2001, are seeking to topple the Western-backed government in Kabul and reimpose Islamic rule.

“There is fighting in every street and the situation is critical,” said Ismail Kawasi, a spokesman for the Public Health Ministry in Kabul.

Additional medical supplies and personnel were positioned in neighboring provinces, but they must wait for the fighting to subside before they can be flown to Kunduz, he said.