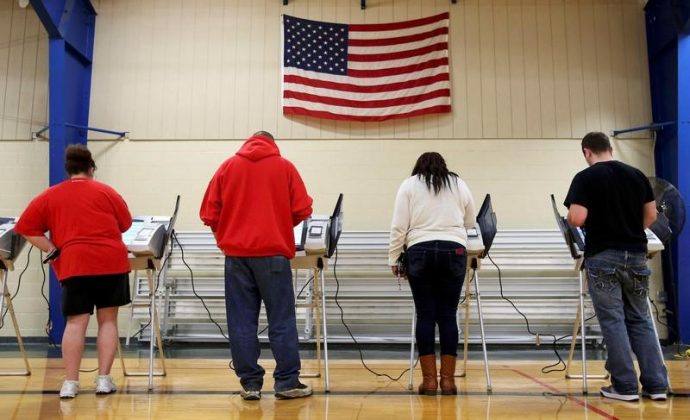 (Reuters) – The Trump administration has reversed an Obama administration stance and will support Ohio in its bid at the U.S. Supreme Court to revive a state policy of purging people from voter-registration lists if they do not regularly cast ballots.

The Justice Department filed legal papers with the high court on Monday staking out the new position in the voting rights case, backing the Republican-led state’s policy to purge inactive voters.

Former President Barack Obama’s Justice Department had argued in a lower court that Ohio’s policy violated the 1993 National Voter Registration Act, which Congress passed to make it easier for Americans to register to vote.

Civil liberties advocates who challenged Ohio’s policy have said it illegally erased thousands of voters from registration rolls and can disproportionately impact minorities and poor people who tend to back Democratic candidates.

The state on Tuesday welcomed the administration’s action but voting rights advocates opposed it. The League of Women Voters accused the administration of “playing politics with our democracy and threatening the fundamental right to vote” by siding with an Ohio policy it said disenfranchises eligible voters.

“Our democracy is stronger when more people have access to the ballot box – not fewer,” the Democratic National Committee added.

The 6th U.S. Circuit Court of Appeals in Cincinnati last year blocked Ohio’s policy, ruling that it ran afoul of the 1993 law. The state appealed to the Supreme Court, which agreed in May to hear the case.

The brief, signed by Acting U.S. Solicitor General Jeffrey Wall, argued that Ohio’s policy is sound because it does not immediately remove voters from the rolls for failing to vote, but only triggers an address-verification procedure.

The American Civil Liberties Union last year sued Ohio Republican Secretary of State Jon Husted over the policy. The suit said the policy led to the removal of tens of thousands of people from the voter rolls in 2015.

Husted said in a statement he welcomed the federal government’s support, noting Ohio’s policy “has been in place for more than two decades and administered the same way by both Republican and Democrat secretaries of state.”

Under Ohio’s policy, if registered voters miss voting for two years, they are sent registration confirmation notices. If they do not respond and do not vote over the following four years, they are removed from the rolls. Ohio officials argue that canceling inactive voters helps keep voting rolls current, clearing out those who have moved away or died.

Democrats have accused Republicans of taking steps at the state level, including laws imposing new requirements on voters such as presenting certain types of government-issued identification, intended to suppress the vote of groups who generally favor Democratic candidates.

(Reporting by Andrew Chung; Editing by Will Dunham)