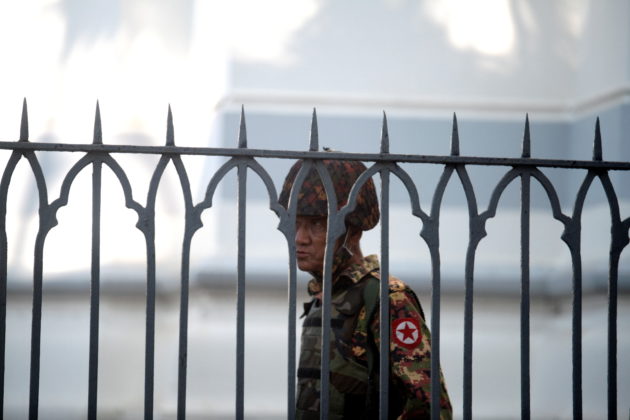 A Myanmar soldier looks on as he stands inside city hall after soldiers occupied the building, in Yangon, Myanmar February 2, 2021. REUTERS/Stringer

(Reuters) – The party of Myanmar’s detained leader Aung San Suu Kyi called on Tuesday for her immediate release and for the military junta that seized power a day earlier to recognize her victory in an election in November.

The Nobel Peace laureate’s whereabouts remained unknown more than 24 hours after her arrest in a military takeover that derailed Myanmar’s tentative progress towards full democracy.

A senior official from her National League for Democracy (NLD) said on Tuesday he had learned she was in good health and was not being moved from the location where she was being held after the coup against her government.

She was picked up in the capital Naypyidaw on Monday along with dozens of other allies but her exact whereabouts have not been made public.

“There is no plan to move Daw Aung San Su Kyi and Doctor Myo Aung. It’s learned that they are in good health,” NLD official Kyi Toe said in a Facebook post which also referred to one of her allies. An earlier post said she was at her home.

Kyi Toe also said NLD members of parliament detained during the coup were being allowed to leave the quarters where they had been held. Reuters was unable to contact him for more information.

The U.N. Security Council was due to meet later on Tuesday amid calls for a strong global response to the military’s latest seizure of power in a country blighted for decades by army rule.

The United States threatened to reimpose sanctions on the generals who seized power.

The coup followed a landslide win for Suu Kyi’s NLD in an election on Nov. 8, a result the military has refused to accept citing unsubstantiated allegations of fraud.

The army handed power to its commander, General Min Aung Hlaing, and imposed a state of emergency for a year.

Min Aung Hlaing told the first meeting of his new government on Tuesday that it was inevitable the army would have to take power after its protests over alleged election fraud last year.

“Despite the Tatmadaw’s (army) repeated requests, this path was chosen inevitably for the country. Until the next government is formed after the upcoming election, we need to steer the country,” Min Aung Hlaing was quoted as saying by army information service.

The election and fighting COVID-19 were the junta’s priorities, he said. He had earlier promised a free and fair election and a handover of power to the winner, but without giving a timeframe.

The electoral commission has dismissed the fraud claims.

The NLD’s executive committee demanded the release of all detainees “as soon as possible.”

In a post on the Facebook page of senior party official May Win Myint, the committee also called for the military to acknowledge the election results and for the new parliament to be allowed to sit. It had been due to meet on Monday for the first time since the election.

Suu Kyi, 75, endured about 15 years of house arrest between 1989 and 2010 as she led a democracy movement against the military, which had seized power in a 1962 coup and stamped out all dissent until her party came to power in 2015.

Her international standing as a human rights icon was badly damaged after she failed to stop the expulsion of hundreds of thousands of ethnic Rohingya Muslims in 2017 and defended the military against accusations of genocide. But she remains hugely popular at home and is revered as the daughter of Myanmar’s independence hero, Aung San.

“We will work with our partners throughout the region and the world to support the restoration of democracy and the rule of law, as well as to hold accountable those responsible for overturning Burma’s democratic transition,” Biden said in a statement.

The United Nations also condemned the coup and called for the release of detainees, in comments echoed by Australia, the European Union, India and Japan as well as former colonial ruler Britain.

China did not join the condemnation, saying only that it noted the events and called on all sides to respect the constitution.

The streets of Myanmar were quiet, as they have been for weeks because of the coronavirus. Troops and riot police took up positions in Naypyitaw and the main commercial center Yangon.

But Myanmar’s international airport in Yangon will stay closed until April or even May, its manager, Phone Myint, told Reuters. He did not say why.

One of the first calls for specific action to oppose the coup came from the Yangon Youth Network, one of Myanmar’s biggest activist groups.

Any street protests will raise alarm in a country with a grim record of military crackdowns.

China’s state Xinhua news agency quoted a military official as saying most regional and state leaders who were detained during the takeover were released on Tuesday.

The chief minister of the Sagaing region, Myint Naing, told the BBC after his release that he had been treated well.

“I worry for the future of the nation. We hoped for the best but the worst is happening,” he said.

The coup marks the second time the military has refused to recognize a landslide election win for the NLD, having also rejected the result of 1990 polls that were meant to pave the way for multi-party government.

Following mass protests led by Buddhist monks in 2007, the generals set a course for compromise, while never relinquishing ultimate control.

The NLD came to power after the 2015 election under a constitution that guarantees the military a major role in government, including several main ministries, and an effective veto on constitutional reform.

Consolidating its position, the new junta on Monday removed 24 ministers and named 11 replacements for various portfolios including finance, defense, foreign affairs and interior.