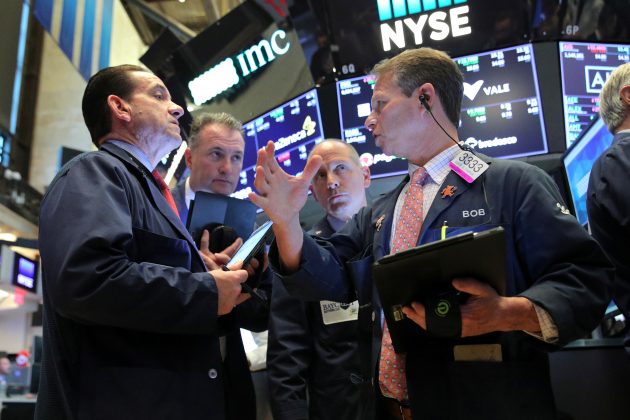 (Reuters) – The S&P 500 touched a record high for the second straight session on Friday as hopes of trade talks between Washington and Beijing were lifted by U.S. Vice President Mike Pence’s decision to defer a planned speech on China policy.

The decision was taken amid “positive signs” that trade talks with China could be back on track, the Wall Street Journal reported, citing a senior administration official.

The benchmark S&P 500 index hit an intraday high of 2,964.15 on Friday, but retreated into a tight range as rising tensions between the United States and Iran kept investors on edge.

The United States and China have said they would restart their trade talks after a lull at the Group of 20 summit in Japan next week.

“Investors are cautiously optimistic about the G20 summit. If they make progress then markets will celebrate that,” said Michael Antonelli, market strategist at Robert W. Baird in Milwaukee.

Stocks are now set to log their third straight week of gains, after posting their worst monthly performance this year in May on fears the prolonged trade war would hit global economic growth.

U.S. President Donald Trump said on Friday he aborted a military strike on Iran in response to Teheran downing a U.S. drone, but the possibility of a U.S. retaliation pushed crude prices higher and helped lift the energy sector by 0.49%. [O/R]

Traders also pointed to higher volatility during Friday’s session on account of “quadruple witching,” as investors unwind interests in futures and options contracts prior to expiration.

The tech-heavy index was weighed down by a 2.02% fall in PayPal Holdings Inc after the digital payments company said its chief operating officer Bill Ready would step down.

CarMax Inc rose as much as 6% to a record high after the used-vehicles retailer posted quarterly results above analysts’ expectations.

Carnival Corp fell for the second day, down 4.53%, and among the biggest decliners. Several brokerages trimmed their price targets after the cruise operator cut its 2019 profit forecast.