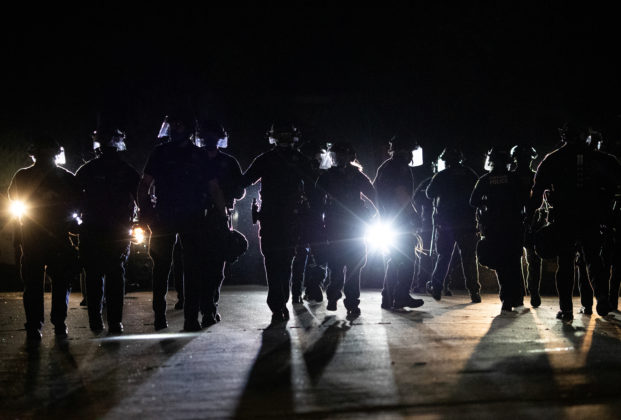 (Reuters) – Police arrested 11 people in Portland as protests continued to take place after 100 days of demonstrations in the Oregon city against racism and police brutality.

Tuesday night, a group began gathering at the site of the Saturday Market and marched in the street to the area of Transit Police Department offices, the police said in a statement.

As the crowd arrived, some stood on the train rails, which interfered with trains getting through the area. Other members of the group stood in the street, blocking vehicular traffic, the police added.

The police said they ordered the demonstrators to disperse. Some adhered while others continued to march around in the streets and threw projectiles such as eggs and water bottles toward officers.

Portland police said they used some munitions to control the crowd but no CS gas, the main component of tear gas.

The police did not mention any injuries but said they made 11 arrests on charges such as interfering with a peace officer, disorderly conduct, resisting arrest and attempting escape.

Portland has seen nightly protests for over three months that have at times turned into violent clashes between demonstrators and officers, as well as between right- and left-wing groups.

Demonstrations erupted around the United States following the death in May of George Floyd, a Black man, after a Minneapolis police officer knelt on his neck for nearly nine minutes.

(Reporting by Rama Venkat in Bengaluru; Editing by Steve Orlofsky)