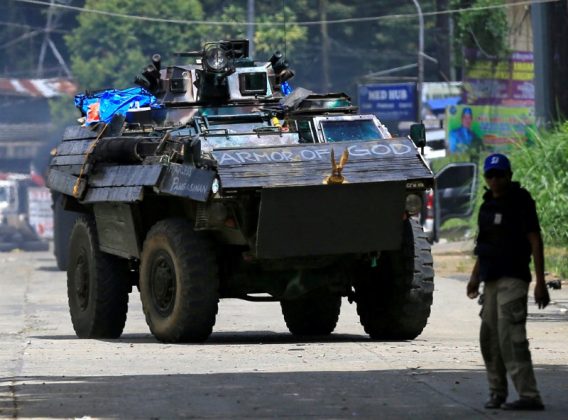 An armoured personnel carrier (APC) drives along the road of Amai Pakpak, as government troops continue their assault against insurgents from the Maute group, who have taken over large parts of Marawi city, Philippines. REUTERS/Romeo Ranoco

MARAWI CITY, Philippines (Reuters) – The Philippines military said on Friday that some of the Islamist militants who stormed Marawi City in the south of the country last month may have mingled with evacuees to slip away during the battle that has raged for nearly four weeks.

Brigadier General Restituto Padilla said security had been tightened in the cities of Iligan and Cagayan de Oro and the authorities there were on the lookout for suspicious characters who might “attempt to sow some confusion or sow terror”.

“We’re not denying that there’s probably a few who may have slipped along with the evacuees from Marawi going to Iligan and Cagayan de Oro,” he told reporters in Manila, while OV-10 aircraft in Marawi pounded an area where militants have been holed up since May 23.

The military says that up to 200 fighters, most of them from local insurgent groups that have pledged allegiance to Islamic State but also some foreign fighters, are holding out, using civilians as human shields and mosques as safe havens.

The attempt by hundreds of well-armed militants to overrun and seal off the city has alarmed governments across Southeast Asia, which fear that Islamic State – losing ground in Iraq and Syria – is trying to establish a foothold in their region that could bring a rash of extremist violence.

The defense ministers and military chiefs of Indonesia, Malaysia and the Philippines will meet in the Indonesian town of Tarakan, on Borneo island, on Monday to discuss the threat and agree on steps to coordinate better to confront terrorism.

A port town, Tarakan is just south of the Malaysian side of Borneo and looks out across the sea to Mindanao in the southern Philippines, a sprawling island that has been plagued by insurgencies and banditry for decades.

Philippines military spokesman Padilla told reporters that talk of fighters planning attacks in neighboring towns was based on “misinformation that’s being spread by the enemies” and in fact their capacity was severely reduced.

In a battle assessment on Friday, the military said those still in the town were also weakening.

“Enemy resistance continues to dwindle and enemy-held areas continues to get smaller as troops advance,” it said, but giving no indication of how long it might take to retake the town.

Previous deadlines to defeat the insurgents were missed.

More than 300 people have been killed in the battle for Marawi, according to official estimates, including 225 militants, 59 soldiers and 26 civilians.

A politician who has led rescue and relief efforts said on Thursday that residents fleeing Marawi had seen at least 100 dead bodies in an area where the fighting had been fierce. The military said it could not confirm that number.