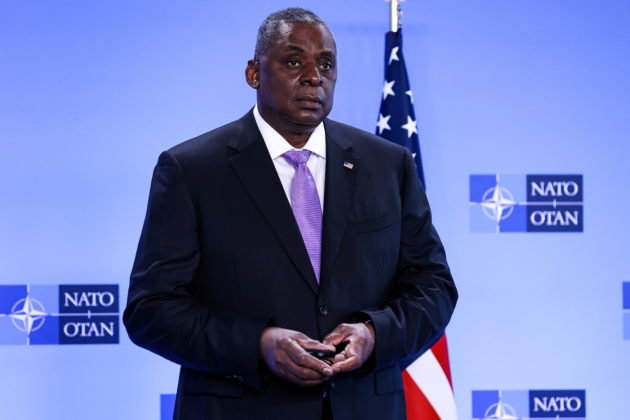 FILE PHOTO: U.S. Defense Secretary Lloyd Austin looks on as he arrives for a meeting of foreign ministers of the U.S., Britain, France and Germany on Afghanistan at NATO's headquarters in Brussels, Belgium, April 14, 2021. Kenzo Tribouillard/Pool via Reuters/File Photo

By Idrees Ali and Phil Stewart

WASHINGTON (Reuters) -U.S. Defense Secretary Lloyd Austin said on Thursday the process of removing all contractors from Afghanistan working with the United States was under way as part of President Joe Biden’s withdrawal of forces from the country.

The remarks are the clearest indication yet that Biden’s April order to withdraw all U.S. forces from Afghanistan by Sept. 11 extended to U.S.-funded contractors.

Asked whether the Pentagon had issued orders to withdraw not just American troops but also contractors, Austin said: “We’re going to responsibly retrograde all of our capabilities that we are responsible for and the contractors fall in that realm as well.”

Speaking with reporters, Austin said the contractors could, however, renegotiate their contracts in the future.

The departure of thousands of contractors, especially those serving the Afghan security forces, has raised concerns among some U.S. officials about the ability of the Afghan government and military to sustain critical functions.

‘NOT A FOREGONE CONCLUSION’

Austin said the drawdown was going according to plan so far.

But Afghan security forces are locked in daily combat with the Taliban, which has waged war to overthrow the foreign-backed government since it was ousted from power in Kabul in 2001.

In just two days, the Taliban captured a second district in the northern province of Baghlan on Thursday.

The Afghan government says the Taliban have killed and wounded more than 50 troops in attacks in at least 26 provinces during the last 24 hours, while its forces killed dozens of Taliban over the same period.

The Chairman of the Joint Chiefs of Staff, General Mark Milley, said there had been sustained levels of violent attacks against Afghan security forces but none against U.S. and coalition forces since May 1.

Milley, in the same news conference, said it was too early to speculate on how Afghanistan would turn out after the withdrawal of U.S. forces given that Afghanistan had a significantly sized military and police force and the Afghan government was still cohesive.

“It is not a foregone conclusion, in my professional military estimate, that the Taliban automatically win and Kabul falls or any of those dire predictions,” Milley said.