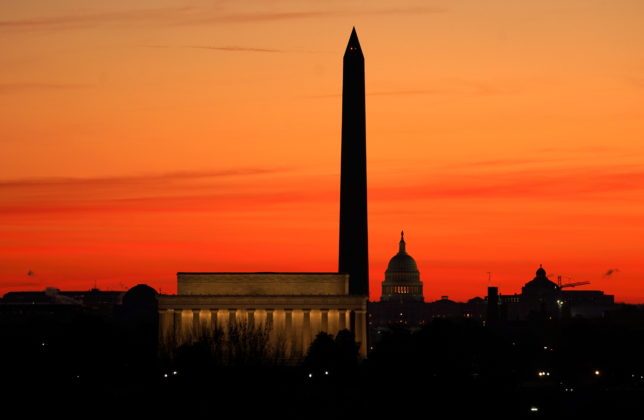 The sky turns shades of red as the sun rises behind the U.S. Capitol, the Washington Monument and the Lincoln Memorial in Washington, U.S., November 19, 2020. REUTERS/Kevin Lamarque

By Andy Sullivan and Susan Heavey

WASHINGTON (Reuters) – The U.S. presidential election battleground state of Georgia is expected on Thursday to affirm Joe Biden’s victory over Donald Trump after a painstaking recount, which would deal yet another setback to the president’s attempts to cling to power.

Georgia’s top election official, a Republican, has said the manual recount of almost 5 million votes is unlikely to erode Biden’s initial 14,000 winning margin by enough to hand Trump victory in the state.

That would leave Republican Trump with a dwindling number of options to overturn the results of an election in which Democrat Biden won 5.8 million more votes nationwide. Barring a series of unprecedented events, Biden will be sworn in on Jan. 20.

In the state-by-state Electoral College that determines the winner, Biden has captured 306 electoral votes to Trump’s 232, well ahead of the 270 needed for victory. The winner in each state is awarded that state’s electoral votes, a number roughly proportional to the population.

Flipping Georgia’s 16 votes would still leave Trump at least two closely contested states away from overturning Biden’s victory. Georgia officials say they expect to release results on Thursday ahead of a certification deadline on Friday.

In Pennsylvania, where Biden won by 82,000 votes, the Trump campaign is asking a judge to declare him the winner there, saying its Republican-controlled legislature should choose the state’s slate of 20 Electoral College voters.

In Wisconsin, the Trump campaign has paid for a partial recount, even though election officials there say that will likely only add to Biden’s 20,000-vote advantage in a state that carries 10 electoral votes.

Trump’s campaign has filed lawsuits in a number of other states, including Michigan, with scant success so far.

Those legal motions, sprinkled with factual errors, have been dismissed by Biden’s campaign as “theatrics” that are not based on sound law.

Several prominent law firms have pulled out of the operation, leaving Trump’s personal lawyer Rudy Giuliani to spearhead the efforts.

Trump said on Twitter on Thursday that lawyers would discuss a “viable path to victory” at a news conference at noon ET (1700 GMT).

State and federal election officials, as well as outside experts, say Trump’s argument that the election was stolen from him by widespread voter fraud has no basis in fact.

However, it does appear to be affecting public confidence in American democracy. A Reuters/Ipsos opinion poll released on Wednesday found about half of Republicans believe Trump “rightfully won” the election.

Arizona’s top election official, Democrat Katie Hobbs, said she and her family had been getting violent threats and urged Trump to stop casting doubt on the result, in which he lost by just over 10,000 votes.

“(The threats) are a symptom of a deeper problem in our state and country – the consistent and systematic undermining of trust in each other and our democratic process,” Hobbs said in a statement.

Trump, who has largely stayed in the White House and kept out of public view since the election, has no public events scheduled for Thursday.

His administration has so far refused to recognize Biden as the winner, which has held up funding and security clearances to ease the transition from one president to another ahead of the Jan. 20 inauguration.

Biden said on Wednesday that the delay was preventing his team from planning a new assault on surging coronavirus infections, which is straining the U.S. healthcare system.