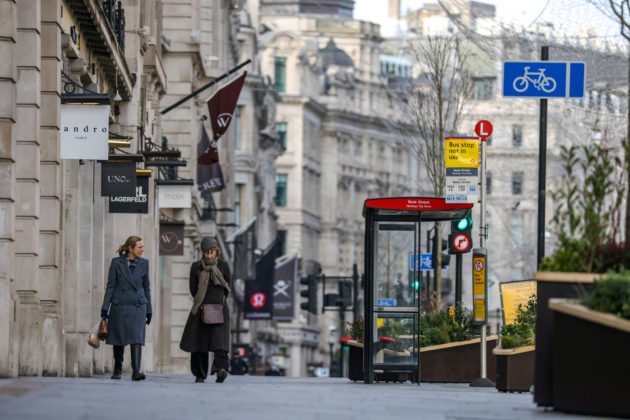 By William James and Elizabeth Piper

LONDON (Reuters) – Prime Minister Boris Johnson unveiled a map out of lockdown for England on Monday that would keep some businesses shuttered until the summer, saying caution was necessary to ensure there were no reversals on a “one-way road to freedom”.

After imposing one of the strictest lockdowns in the western world in January to counter a highly contagious variant of the coronavirus, Johnson said Britain was now in a position to enjoy the fruits of one of the world’s fastest vaccine programs.

Starting in two weeks with the reopening of schools, the phased plan will go through four stages, with at least five weeks in between each stage. The final step, when most restrictions will be lifted, will not start until June 21 at the earliest.

Britain and the world would not eliminate COVID-19 altogether, Johnson said. “And we cannot persist indefinitely with restrictions that debilitate our economy, our physical and mental well-being, and the life chances of our children,” Johnson told parliament.

“And that is why it is so crucial that this roadmap is cautious but also irreversible. We’re setting out on, what I hope and believe, is a one-way road to freedom.”

With almost 130,000 fatalities, Britain has suffered the world’s fifth-highest official death toll from the pandemic and its economy has seen its biggest crash in over 300 years.

But in two months it has already managed to provide an initial vaccine dose to more than a quarter of the population, the fastest rollout of any big country, making it a test case for governments worldwide hoping to return life to normal.

Even with encouraging data on the impact of vaccines, the British government’s cautious approach highlights how slow a process it will likely be for many countries.

Johnson has come under pressure, including from many in his Conservative Party, to allow more freedoms to millions stuck at home and offer hope to firms forced to close.

Under his plan schools will reopen on March 8, freeing parents who have had to juggle work and home schooling.

However, easing of social mixing bans will initially be limited and the government will ask people to work from home when possible for some weeks until it has completed a review into social distancing at some point before the summer.

At the end of March, a small number of people will be able to mix outdoors, but non-essential shops, and outdoor-only service in restaurants and pubs, will not reopen until April 12 at the earliest.

As the plan unfolds, lawmakers will have a chance to vote on specific steps. Authorities in Scotland, Wales and Northern Ireland, which are responsible for their own public health, will also ease restrictions over the coming months.

There was mixed reaction from business leaders to the plan. The Confederation of British Industry said it offered hope, but the hospitality industry said it would be hard for many businesses to survive until they could reopen.

“Even with the prime minister’s new roadmap, the future of thousands of firms and millions of jobs still hangs by a thread,” said Adam Marshall, Director General of the British Chambers of Commerce.

There were widespread calls for finance minister Rishi Sunak to extend support, such as schemes that have paid the salaries of workers sent home because of the pandemic. An announcement will not come until Sunak delivers his budget next month, but Johnson promised not to “pull the rug out”.

“For the duration of the pandemic the government will continue to do whatever it takes to protect jobs and livelihoods across the UK,” Johnson told parliament.

Johnson, who was treated in intensive care for COVID-19 last year, has been forced to juggle pressure from Conservative lawmakers to restart the economy and from scientific advisers who fear a resurgence of the virus if he unlocks too quickly.

“The message that comes out of all of the modelling is … get (infection) numbers down before you start releasing, go slowly, (and) go in blocks that you can measure the effect of after four or five weeks,” the government’s top science adviser Patrick Vallance told reporters.

England’s vaccine campaign is significantly reducing cases, with a drop of around 70% in infections among healthcare workers who have had a first dose of the Pfizer-BioNTech shot, health officials said on Monday.

Britain moved faster than most countries to secure vaccine supplies and has been inoculating people rapidly since December, a strategy that has driven sterling higher on hopes of an economic rebound. The pound hit a new three-year high of $1.4050 in early London trading on Monday.

Some 17.7 million Britons, over a quarter of the 67 million population, have now received a first dose, behind only Israel and the United Arab Emirates in vaccinations per capita.